Quick note
This is the fourth post in my Birding in New Zealand series. Like the others, it is meant as a permanent online reference, is long and detailed, and will be archived in the International Birding Resources tab under the main banner heading. The other posts in the series are:
Post #153 - Birding in NZ, part 1: Background, preparation, logistics
Post #154 - Birding in NZ, part 2: Endemic birds and suggested South Island routes

Kaikoura Overview
If you are fired-up by albatrosses, petrels, whales, dolphins, and seals, then there's no better destination than Detroit! Did I say Detroit? I mean Kaikoura, a small, charming, and stunningly beautiful town 2.5 hours north of Christchurch on New Zealand's South Island. Though this post will feature a heavy birdwatching slant, Kaikoura is one of New Zealand's - and possibly the world's - great ecotourism destinations. There is so much to see and do, and the destination is as popular with hardcore birders as it is families. Birders should definitely keep reading, but I'll point everyone towards Kaikoura's official website for more information. The site is really well done, and I've modified the below map from it. Hopefully they won't give me a hard time considering I'm marketing their ecotourism product! 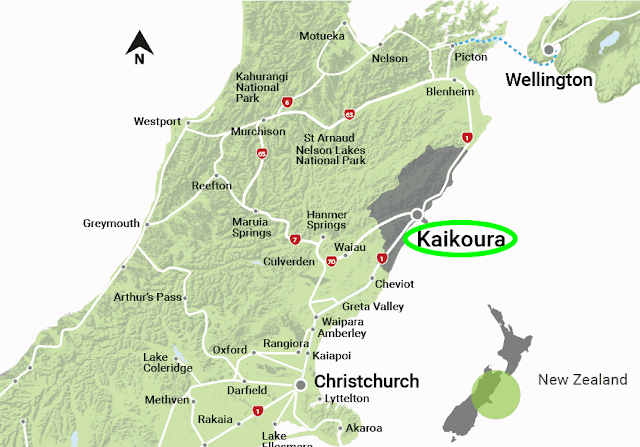 Why Kaikoura?
Kaikoura is similar to Monterey, California in that it offers very easy access to a deepwater submarine canyon. Life abounds in that pelagic habitat, and nutrient upwellings along the canyon walls attract birds and marine mammals in astounding numbers. The beauty of Kaikoura is that visitors need not reach far from shore to enjoy the ocean's riches. I was into Wandering Albatrosses, Dusky Dolphins, and Sperm Whales just 20 minutes from the dock! Kaikoura is arguably the best and most accessible pelagic birding on Earth. 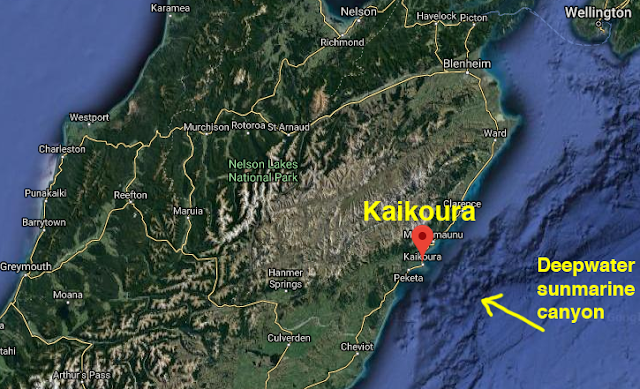 Why Kaikoura? Because who wouldn't enjoy this?!?!?!
Also from Kaikoura's official website 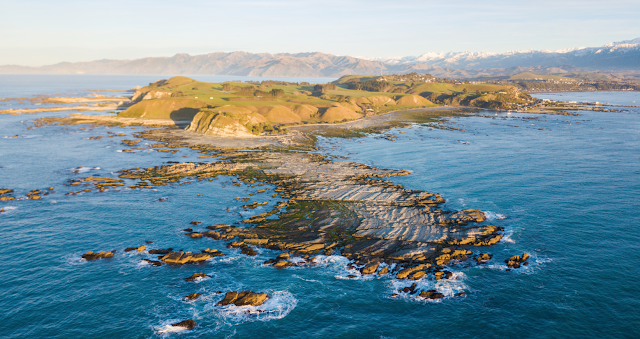 Pelagic birding in Kaikoura
As far as Kaikoura is concerned, you need know only one name: Albatross Encounter (AE), a branch of the larger and more popular Dolphin Encounter with which AE shares a facility (reservation desk, cafe, and gift shop, etc). AE really has their act together as evidence by the eBird Hotspot dedicated to their trips. I took two trips on consecutive mornings and saw Wandering, Royal, White-capped, Salvin's, and Buller's Albatrosses between the two trips. Wandering and Royal were undoubtedly the most impressive. Both have wingspans nearing 11 feet and came into the chum slick at the back of the boat. It's difficult to comprehend such huge birds until the fly past you at distance of fifteen feet! 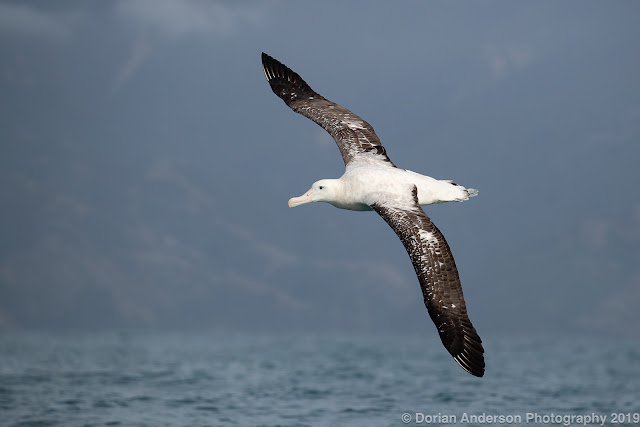 Wandering Albatrosses, Northern Giant-Petrels,
and Cape Petrels behind our boat
The lighting was really, really bad on both my trips, sadly 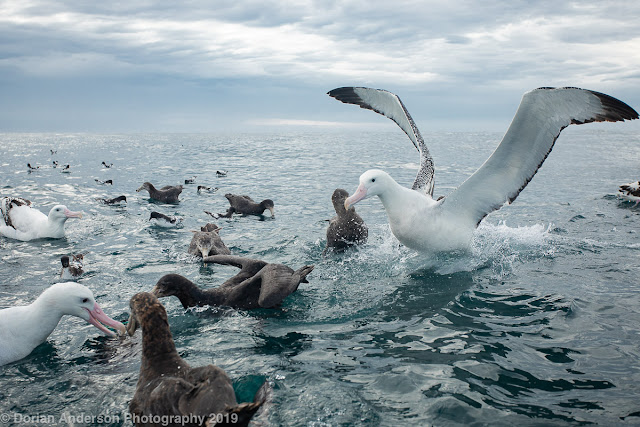 Beyond the albatrosses, Northern Giant-Petrel, Cape Petrel, White-chinned Petrel, Westland Petrel, Flesh-footed Shearwater, Buller's Shearwater, Sooty Shearwater, and Hutton's Shearwater all made appearances. The Hutton's is particularly interesting because it nests only the mountains to the west of Kaikoura. It's a New Zealand breeding endemic and would be a full/true endemic if it didn't venture into Australian waters during the non-breeding months. Young and disoriented adult birds are often found in town as they crash out between the mountains and sea, and there is an extensive protocol to rehabilitate and release the birds that are recovered. 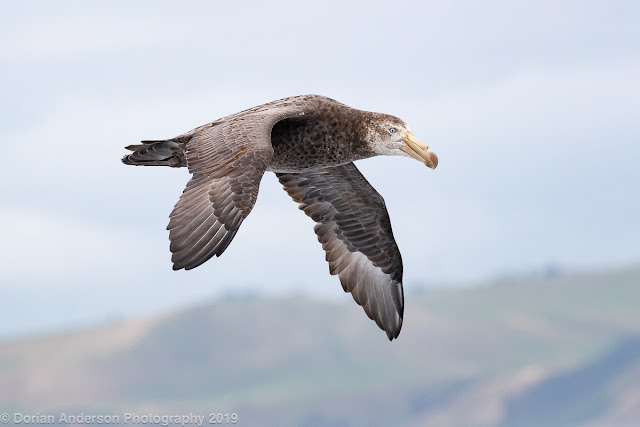 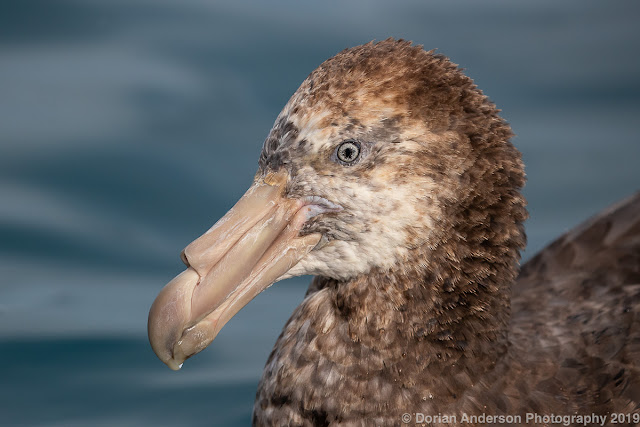 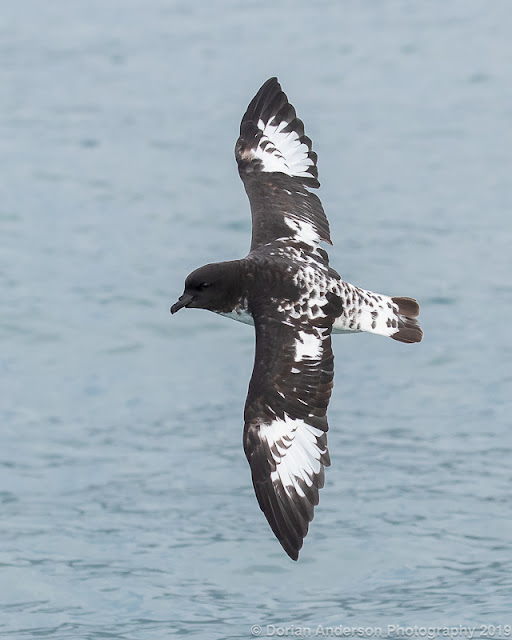 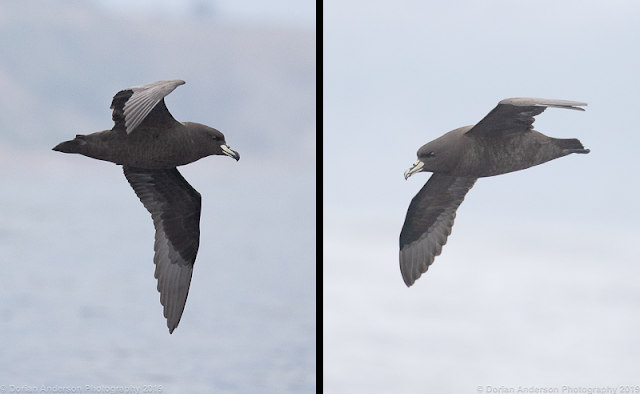 We saw several loads of Dusky Dolphins, some right next to the boat, and even a couple Sperm Whales. Time inshore produced great looks at various shags and New Zealand Fur Seal (photos below). The only regret I have was the the lighting was awful for all but 20 minutes of my two trips, so photos haver zero color and contrast. It was really frustrating, but I couldn't control it.

You get the idea. Kaikoura pelagic trips are a lot of fun. AE runs up to three trips a day, so contact them and see which trips are going. Everything you might need to know is on their website.

Other Stuff to do in Kaikoura

Dolphin Swimming
Chances are you'll see at least some whales and dolphins on your birding trip, so you might be able to pass on a dedicated whale watch. However, we didn't do dolphin swimming and we kind of wish we had. If you're interested in that, then I'll point you back to Dolphin Encounter as that's squarely in their wheelhouse.

Seal Swimming
This we did do, sort of. The idea is great - get in a boat, go to seal colony,  and swim around with the animals - but it doesn't always come to fruition, mostly because of weather. Outside of hunting/fishing, seals rest/sleep. If it's cool, then they'll lay on the rocks all day. If it's hot, then they'll spend a lot of time paddling about the shallows to stay cool. Since it was cold and cloudy on our day, we struck out on activity. We could see dozens of seals sleeping on the rocks as we snorkeled around the colony, but none of them swam. It was still a cool experience, and Seal Swimming Kaikoura issued us a 50% refund since we didn't swim with seals. They were a really classy operation, and I would highly recommend them. The trick is to pick your moment and go when it's sunny and hot. Also try to pick a windless day as swimming will be easier and underwater visibility will be better (less stirred-up sediment).

Otherwise visitors can rent kayaks and bikes, poke around in tide pools, relax on the beach, and explore the town and its many restaurants and shops. Kaikoura is small, but Sonia and I had several independent strolls along the main drag, usually with ice cream in hand. Of all the places we went in New Zealand, we liked Stewart Island and Kaikoura the best (hence posts dedicated to those place).
If you're a die hard pelagic birder and missed the Stewart Island post (#155), I'll point you there for yet more pelagic info!

OK, that's it for Kaikoura, for now. Not sure what's up next, but check back in a week or so!
Posted by Dorian Anderson at 11:42 AM