Williamson's Sapsucker (WISA) is common in California's Sierras but makes only rare appearances at lower, coastal elevations; between May of 2017 and September of 2021, eBird shows just three records from the Bay Area (blue pins on right map). All were single-observer encounters with flying/transient birds, so there was zero opportunity to initiate a pursuit in each instance. Given that scarcity and pattern, I was curious when Carter Gasiorowski reported a beautiful male at Vasona Park in Santa Clara County on October 4th (orange pin on right map). When the bird frequented the same small grove of trees through that day and the next, I decided to ride for it on the morning of the 6th. At 72 round-trip miles, it promised to be an exhausting undertaking. 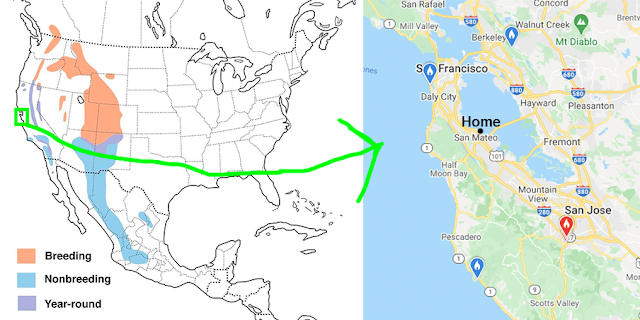 I departed San Mateo at 7:15am, battled heavy traffic and uncooperative lights south to Redwood City, and reached Palo Alto before joining Foothill Expressway and rounding the outskirts of San Jose. Reaching the park at 9:55, I intersected a dozen disappointed birders and photographers, the sapsucker absent all morning. Disregarding their dejection, I scoured the favored grove and surrounding with hopes of a midday reveal. No sapsucker in evidence and my stomach begging for sustenance by 1pm, I folded my search, grabbed a quick lunch, and started home. I assumed that task would consume three-plus hours given the northwest headwind which had built through the day, but I completed the inbound leg in the same 2 hours and 40 minutes which the outgoing required. Checking my phone after showering, I learned the WISA had shown for several observers at 3:30pm. Ugh - at least it was a nice day for a ride.

75 miles including a detour for Vesper Sparrow in San Carlos 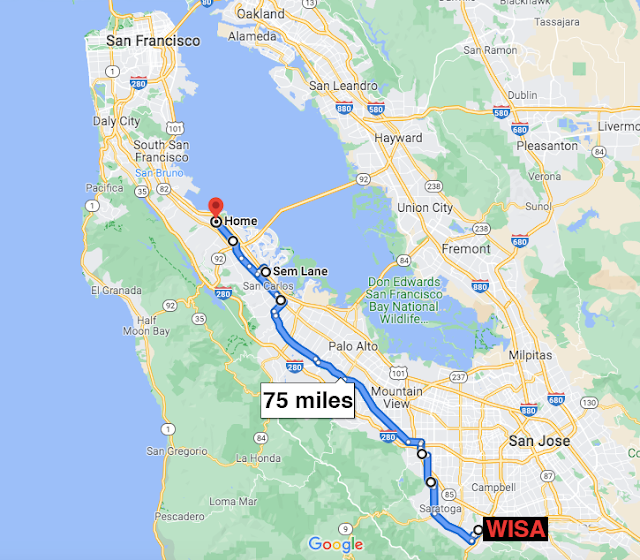 That miss behind me, I turned my attention to the Ovenbird which Kaia Colestock and Elias Elias found at Salesforce Park on October 11th. Ovenbird is an eastern species which makes occasional cameos in California, usually during fall migration, but I'd not seen one anywhere in the state since moving from Boston in April of 2015 (6+ years). 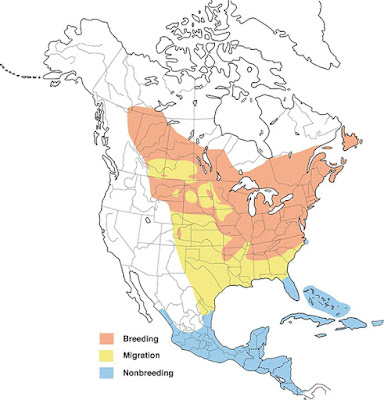 Huge northwest wind prevented a pursuit on the bird's discovery day, but positive reports on the 12th coupled with calm conditions to suggest a pursuit on that second afternoon. I'd knew nothing of the urban oasis when I arrived after an 85-minute ride, but it turned out to be a pretty neat place. I had no idea it was built on top of a transit center. It's not everyday I get in an elevator to go birding!

There was zero drama on this day; a horde of observers pointed me towards the Ovenbird five minutes after I arrived. It was very approachable/cooperative, and I was able to snap a serviceable digi-binoc pic as the bird poked about the understory. 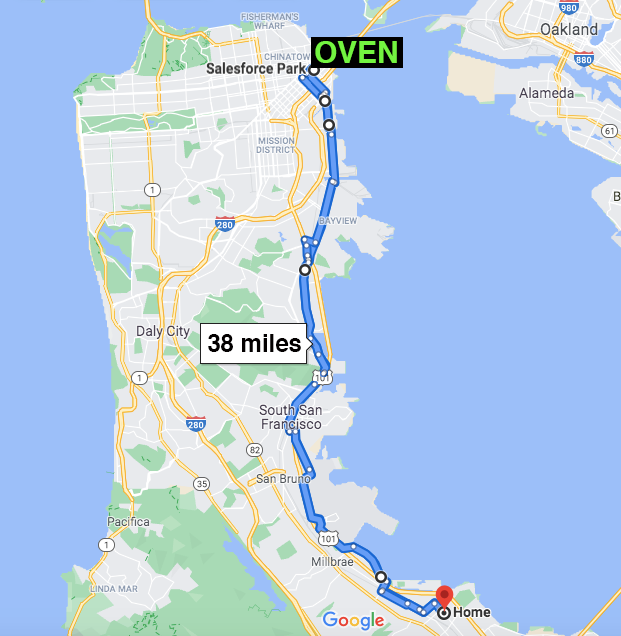 OK - remember the Williamson's Sapsucker from above? Well, it was seen on seven consecutive days following my failed attempt. Non-birding responsibilities and wind prevented redemption through the 13th, but I decided to give the bird another crack on the 14th. I couldn't have asked for a more perfect day -- sunny, no wind, mid-60's -- but the goddamn thing failed to show (again) despite my 5-hour vigil. It was a demoralizing defeat, and the return 36 miles miles took close to 3 hours when it was all said and done. And the worse part? The bird reappeared the following day and continued through the 20th! It seems to be most regular in the late-afternoon, but that timing doesn't work on the bike because I'd need to spend the night down there afterwards. So, the bird will remain one of my greatest misses unless it decides to stay into November, when I return from the East Coast.

72 miles direct, without detour for Vesper Sparrow as on 10/6 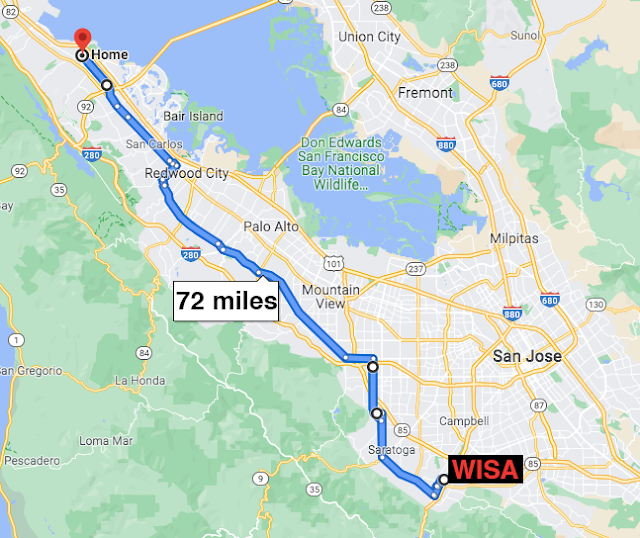 That's it for now. Cheers!
Posted by Dorian Anderson at 8:28 PM No comments:

Locals have found so many great birds around here these last few weeks that I'm wondering if my legs are ever gonna get a rest! I guess there are worse problems to have, and I'm fortunate that breaks in my writing and guiding schedules have coincided to allow regular pursuits. I will recap one particularly involved chase in this post.
Black-throated Blue Warbler (BTBW) is an eastern species which makes rare cameos on the West Coast. One was found in Robertsville in Southern Santa Clara County in October of 2017, but it was out of my range (45 miles each way) in those early Bay Area bike-birding days because I was still recovering from a torn calf suffered ahead of my May move. As that was the only regional record across the last few years, I was stoked to learn that Nina Bai found a beautiful male in the San Francisco Botanical Garden on Saturday, October 2nd. Spotting on an Alvaro's Adventures pelagic on that day and locked into family stuff on Sunday, I had to delay my pursuit until Monday the 4th. Fortunately, the bird stuck, and a mini-mob pointed me towards it ten minutes after I arrived. Pro-tip: make sure you put the battery in your camera before leaving the house so that you don't have to resort to digi-binocs when your SLR is powerless. It was so dark in the understory that I was just happy to get anything with the phone.

With that first target secured, I hustled over to Crissy Field on the Presidio waterfront to look for the female Bobolink which others had reported for the previous ~3 days. Bobolink is another eastern species, but it reaches farther west than BTBW; it is therefore a more 'common' stray in California.
Bobolink range 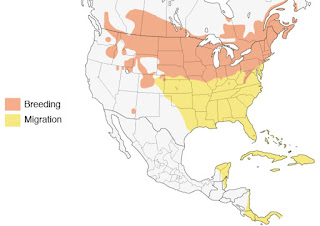 I spent 90 minutes stomping through wet grass but was unable to locate the field-loving bird, it clearly departed as suggested by additional negative reports from that day and the next. I did add a previously-reported female Blue-winged Teal (BWTE) on the lagoon as consolation (SF bike bird #250). That duck is regular around the Bay, but there's very little habitat for it in San Francisco. The female Blue-winged Teal can be differentiated from the very similar female Cinnamon Teal by the better defined eye-line and light patch at the base of the bill (among other subtle field marks). Note - the second/front bird in the below photo is NOT a female Cinnamon Teal, it is a female Green-winged Teal (GWTE). The confusion never ends......

From Crissy, I proceeded east along the water to Fort Mason. David Assman's Lark Sparrow (LASP) had continued for the previous ~10 days, but I wasn't able to find it despite two hours of searching. The bird wasn't reported on that day -- October 4th -- or any day after, so I was clearly looking for another departed example. I can live with missing birds which aren't present because they've moved on, but over-looking a bird which others later re-find sucks. I have LASP on my San Mateo and Santa Clara County bike lists, and I'm sure I'll get it in SF eventually. 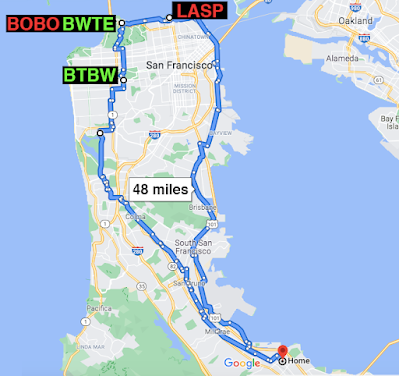 I already have a backlog of content for you, so I'll try to crank additional entries in the next few days. Good birding until then - cheers!
Posted by Dorian Anderson at 7:55 PM 2 comments: