Days are lengthening, the COVID vaccine is being distributed/administered, and spring migration will be here before we know it. Things are looking up! My bike-birding has been hampered by other projects, familial commitments, and injured toes (long story) of late, but I've managed to sneak out on the bike a few times since my last post. I'll recap three recent rides in this installment: one in San Mateo County, one in Santa Clara County, and one in San Francisco City/County.

Mountain Bluebird (MOBL) and Red-necked Grebe (RNGR) in San Mateo County
More common towards the Sierras, MOBL makes only rare appearances at/near the coast; there are only a handful of eBird records spread across San Francisco and San Mateo Counties, so folks on the peninsula were surprised by an iNaturalist report from Mori Point Pacifica on January 24. The bird was seen daily for the next week, but I wasn't able to ride for it because of high winds and accompanying rain. Better weather prevailed on the 30th, and I used a free morning to make the hour-long ride to Pacifica. Drama? Nope! The bird showed with 5 minutes of my arrival and bounced around the coastal cliffs exactly as advertised. Pretty sweet San Mateo bird, especially on the bike! 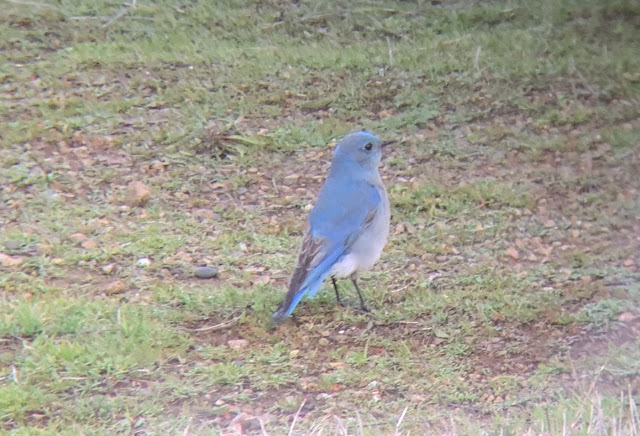 The MOBL showing quickly, I shot up to Mussel Rock to look for the Red-necked Grebe(s) which had been hanging around there for the previous week. The species has been a bit of a San Mateo bike nemesis for me. I've tried piggy-backing it onto pursuits of other species, always without success, and this time was no different despite a two-hour vigil. I have it on my SF bike list and my regular San Mateo list from a pelagic, but it's proved elusive in San Mateo when I'm on the bike. Eventually......

My ride for MOBL and RNGR on January 30th 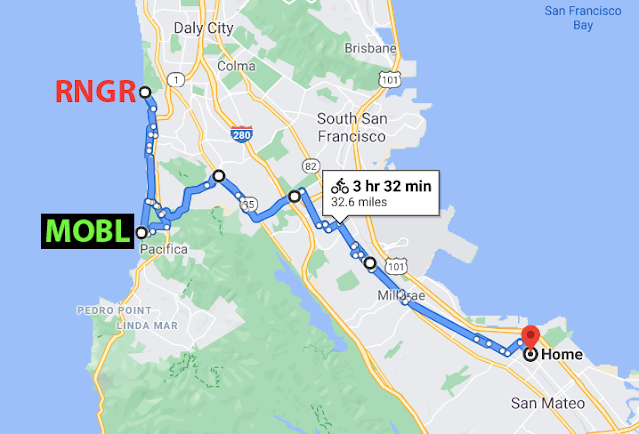 Chipping Sparrow (SCHSP) in Santa Clara County
This species had eluded me in Santa Clara, so I rode down to Terman Park (Mountain View) on the advice of Adam Burnett and ticked three continuing birds within 30 seconds of arriving. Easy as could be. And that's all I'm gonna say about that 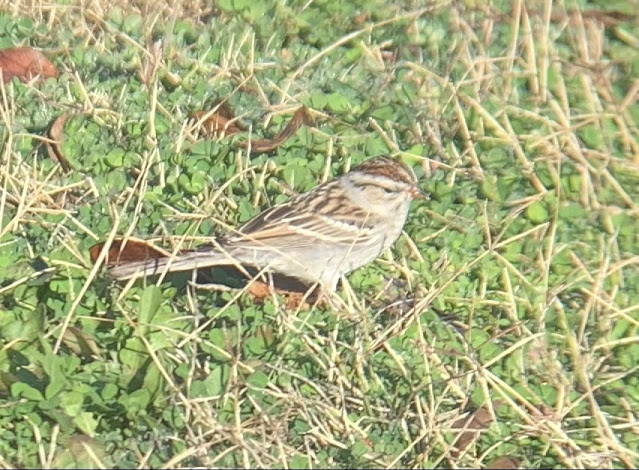 My ride for CHSP on February 10th 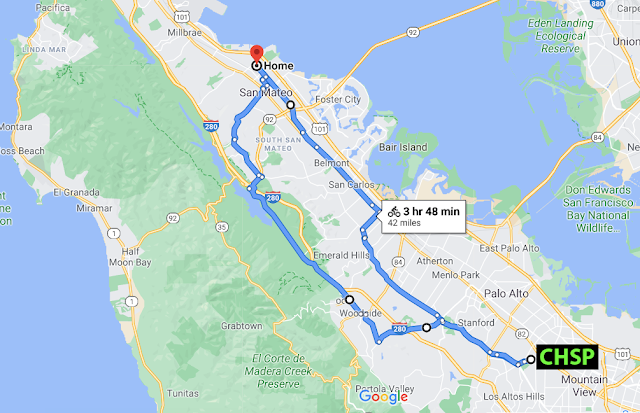 Varied Thrush (VATH), Bullock's Oriole (BUOR), and Baltimore Oriole (BAOR) in San Francisco
I was prepared for a longer search since took a friend and I ninety minutes to find a VATH at this location the previous week (by car),  so I was stoked when one revealed itself just 5 minutes after I arrived. San Francisco Bike Bird #238 secured with minimal effort, I cruised over to Fort Mason to look for the continuing Bullock's and Baltimore Orioles. I didn't have a whiff of either across three hours, so I packed it in at 12:15. I loaded my crap into my panniers and pushed my bike out of the community garden where I'd stashed it. Mounting up, I heard an unexpected rattle from behind me. Slamming on the brakes and excavating my binocs, I got eyes on the sought Baltimore a moment later. It kept calling, so I fished out my 7D2 and 100-400, reassembled the functional rig, and captured some frames of the improbable bird. As I was pishing it in closer, the Bullock's popped up as well! It was really sweet to salvage both birds after I'd conceded them. 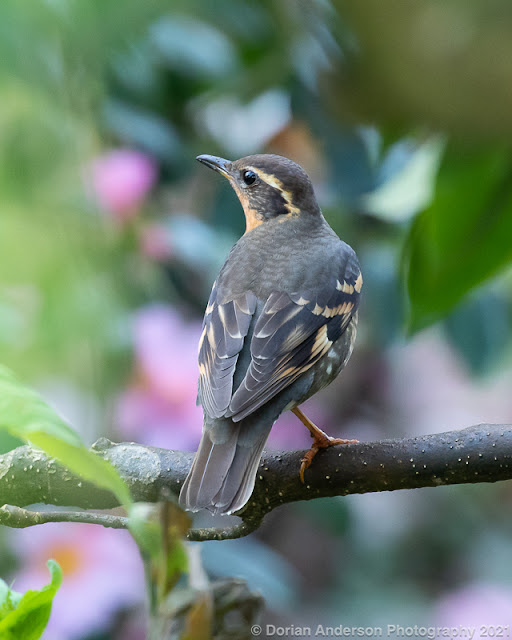 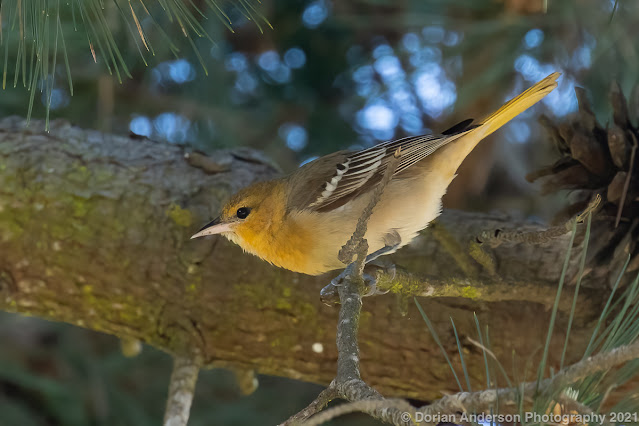 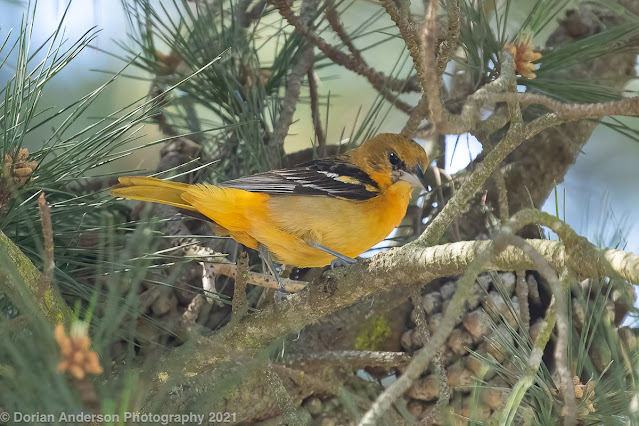 And what about this thing?!?! It's an immature male Northern Red Bishop which has been hanging around Fort Mason, apparently for some time. He doesn't count towards my various lists since the species is an introduced exotic in California - it's native to equatorial Africa - but I had fun chasing him around community garden while I was looking for the orioles.
Northern Red Bishop (DSLR) 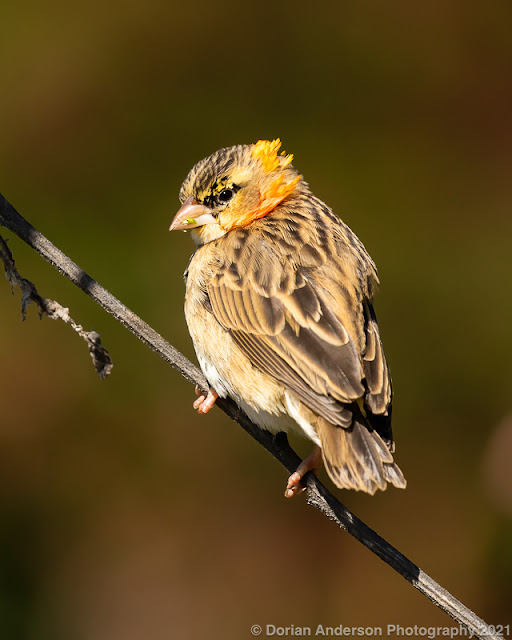 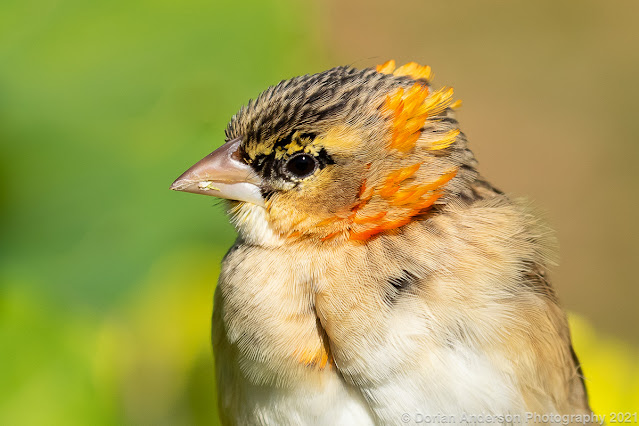 My ride for VATH, BUOR, BAOR on February 26 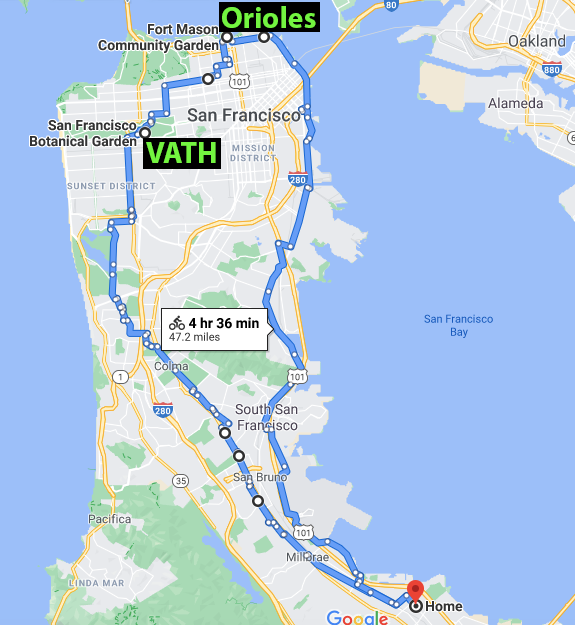 That's it for now. Stay safe. I hope to see folks in the field the next few weeks. Cheers!
Posted by Dorian Anderson at 6:32 PM 2 comments:

Last time I recapped a super productive ride through Santa Clara County, and this time I'm going to describe some San Francisco exploits. The described ride is another holdover from the first half of January, it undertaken on January 7th and targeting three birds in different parts of the city. The first of those was the continuing Swamp Sparrow (SWSP) at Lake Merced. Reliably present for the previous nine days, the bird was favoring the scrubby hillside separating the Vista Grande Canal and the adjacent golf course. Ditching my bike in some bushes after covering the ~14 miles from my San Mateo apartment in 53 mins, I glanced skyward just in time to view a White-tailed Kite (WTKI) float buoyantly over my head. That bird was long-overdue for SF bike bird #236, and my subsequent passes of the favored hillside produced the sought SWSP for SF bike bird #237. Two-for-one, no complaints. 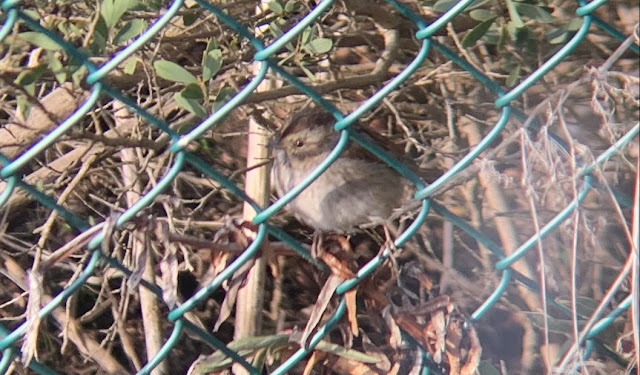 My first target acquired, I turned my attention towards the Hammond's Flycatcher (HAFL) which had been frequenting Moscone Park in the city's northern reaches since December 29 (10 days prior). Beyond a SF bike bird, it also be new for my cumulative Bay Area bike list, that consideration motivating me through the cityscape post-sparrow. The sun broke through while I was en route, and I hoped the flycatcher would be active given warming temperatures and associated insect activity.

I don't know about anyone else, but I'm not a huge fan of birding in urban parks, particularly on really nice days. Why? Well, with a group of little kids playing on one side of the flycatcher's favored area and a dozen twenty-something women doing yoga on the other, I looked like hella shady as I repeatedly scanned chain link fence which separated the two groups. I've watched enough Law and Order: Special Victims Unit to know I - as a forty-two-year-old, ugly-ass white dude - fit the pedo-perv stereotype, particularly with binoculars dangling from my neck, so I just wanted to find the bird and get the hell out of there.

"What were you doing George, birdwatching?" 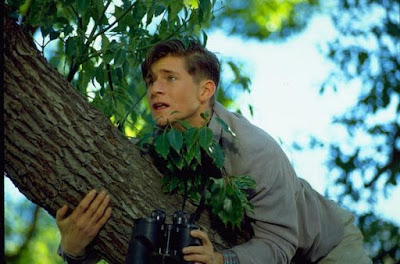 Swirling hoards of White-crowned Sparrows and Yellow-rumped Warblers monopolized the fence for 75 minutes, but a small flycatcher eventually found the gumption to join their ranks. Approaching for a better view, I noted the blocky head, small bill, eye ring, and long primaries, that final field mark rendering the tail short in appearance. The bird also drooped its left wing as other observers had noted of this individual Hammond's (SF bike bird #238). I snapped a few quick shots, jumped on the bike, and cleared out.
Digi-binoc'd Hammond's Flycatcher, thankfully without downward dog behind..... 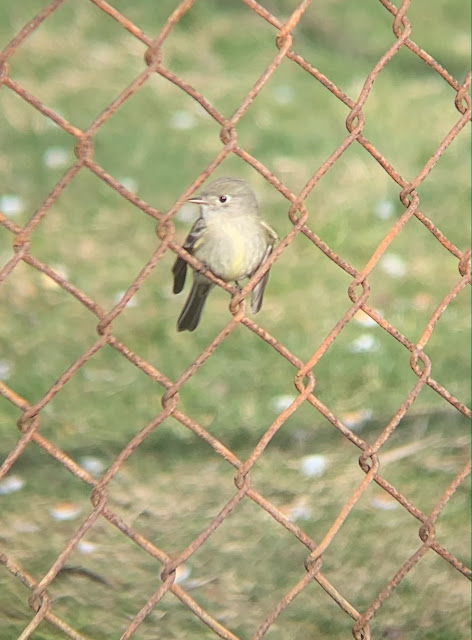 With ample daylight on my way home, I made a one-hour stop at Heron's Head to see what I could find. That yielding nothing unusual beyond Rocky, the incredibly-approachable Rock Sandpiper which has spent the last two winters at the park's distal terminus, I continued to Yosemite Slough with hopes of Loggerhead Shrike. More common inland, the crafty predator makes only hella rare appearances in San Francisco; the individual found by Rachel Lawrence on December 23 as part of her record-breaking SF total (275 species, I think) represented the first SF sighting since 2008 and one of only a handful since 2000 (according to eBird). I missed the bird on my previous December 28 swing, and, sadly, the result was the same this time around. Can't win 'em all, and 2 outta 3 (plus the kite) ain't bad! 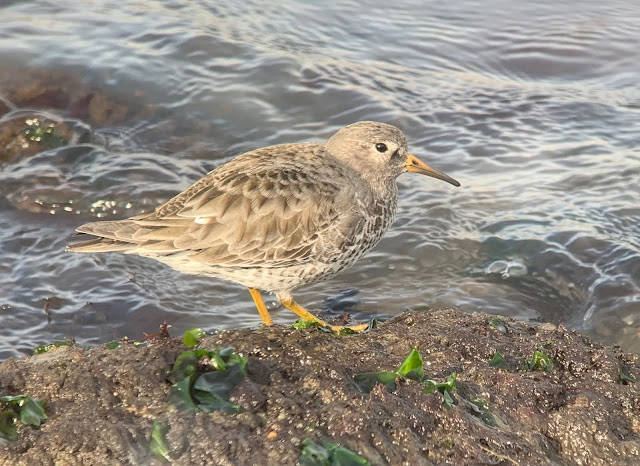 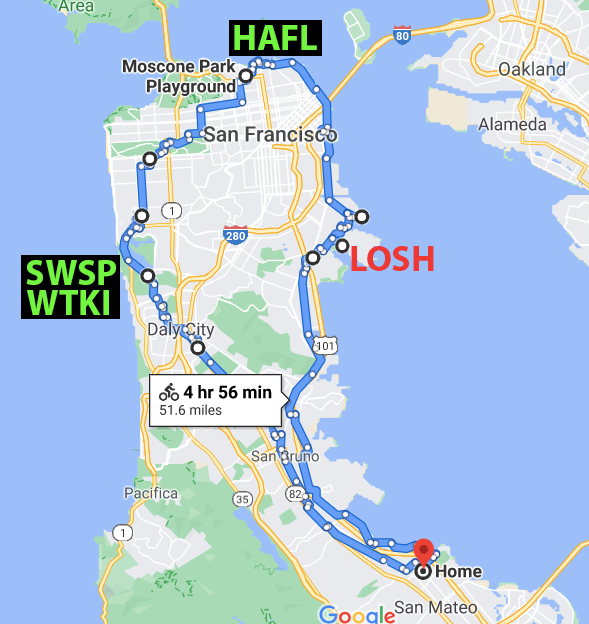