I moved to the Bay Area (San Mateo) in May of 2017 and quickly adopted Foster City as my go-to local photography spot. I cranked out some nice shots through that winter (2017-18) and the next (2018-19), but the area experienced some bottom topography changes ahead of winter 2019-20 that rendered it less productive. Mud moves around, and the birds seemed to be favoring a newly formed bar far out into the Bay. Unable to access that, my Foster City output dropped last year. I was nervous that unproductive trend would continue this winter, but the birds seemed to have returned to their photo-friendly patterns. I've recently captured a bunch of flight images, and I'll use this post to share those and a few words about each.

Let's start with my Foster City bread and butter, the Willet. Yeah, I dropped this shot into a post a few weeks ago, but I'll double up to include it here. These guys aren't much to look at while standing still, but that changes as soon as they spread their high contrast wings. This bird would ideally be banking a bit more, but I thought the two-toned background offset that consideration. This bird was high up off the water, so I was able to get a split water-sky suggestion far behind it. 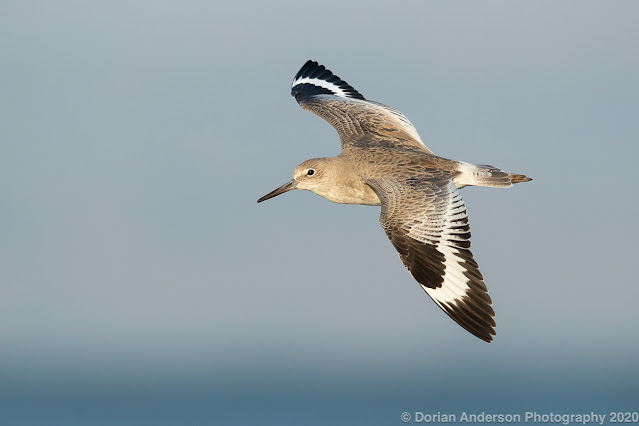 Marbled Godwit is another species which frequents Foster City. They tend fly low along the water, and the end of day light really brings out their cinnamon tones. The trick with these flights shots is to avoid shadows. It's mostly a luck function depending on the bird's trajectory (with the respect to the light) and the bird's wing position, but that's the goal. I have a touch of shadow on the far wing, but I think it's a negligible amount. Like the above frame, it's all about eye contact with the bird acknowledging my presence! 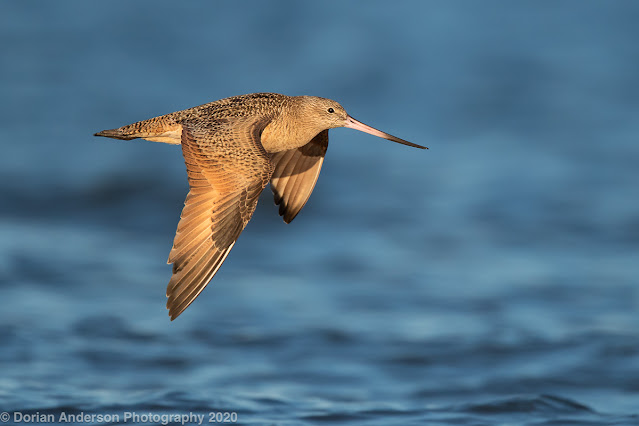 Black-bellied Plovers are present in much smaller number than Willets or Marbled Godwits. They fly faster and tend to stay a bit farther away, so they're harder to nail cleanly and with sufficient detail. Given that challenge, I was stoked to get this speedster in the full upstroke. Note that the axillaries (armpits) remain black (and diagnostic) even in non-breeding plumage. No shadows, woo hoo! 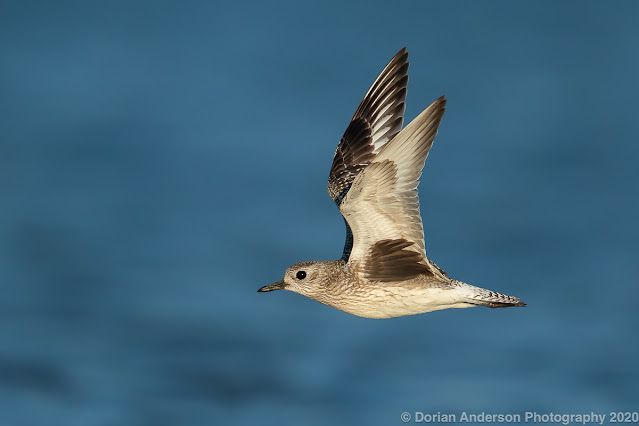 Ok, I cannot tell you how many misses it took to get this full topside frame of this Dunlin. Smaller and move elusive than the previous three species, I think this is a pretty sweet result. I was tracking the bird as it flew in front of me, and it was pure luck that I didn't clip the upper/right wing when he made an unannounced turn. This is probably my best flight frame of this species. Now I gotta get an equivalent result with the bird in breeding plumage! 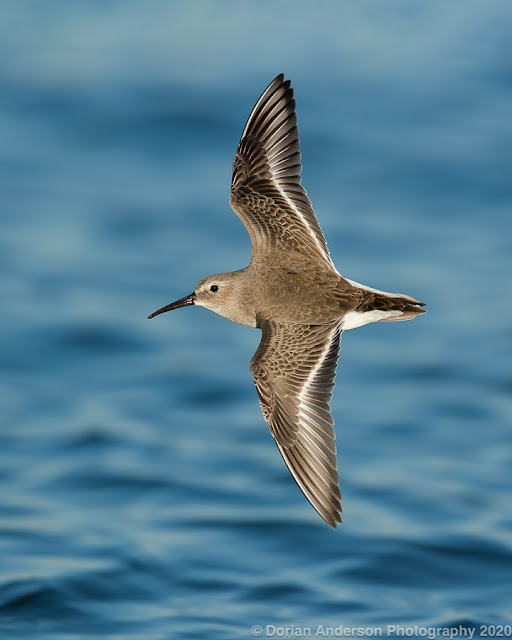 Last, and certainly not least, we have this Long-billed Curlew. This species visits Foster City in smaller numbers - maybe 1-2 flybys per visit - but they are always high overhead and not suitable for shooting. I nearly fell of my rock when I saw this guy coming in hella low, and I was stoked to get a beautifully lit frame against some calm water. I would have liked to have the wings a tiny bit higher, but I can't argue with the lack of shadows. Gotta love that beak, right? 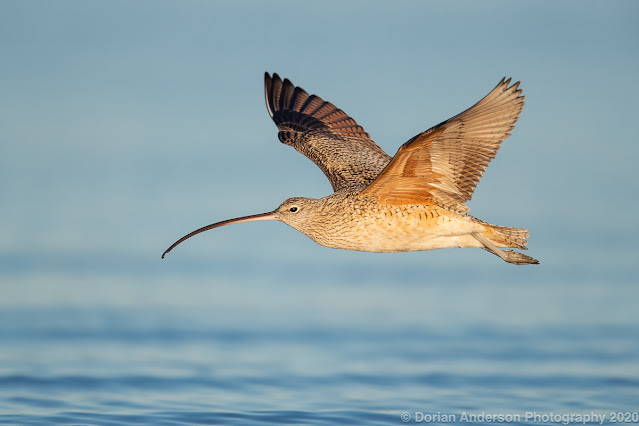 Those paying close attention should notice I'm aiming for shutter speeds of between 1/3200 and 1/5000 for shots like this. In bright sun, that usually means f/5.6 and ISO 640 to 1250, depending on species and lighting conditions. I mention this so readers know what it takes to freeze fast-flying and rapid-flapping species like these. If you can't achieve a sufficiently fast shutter at an acceptable (depending on camera body), then you'll be working from an immediate disadvantage. Remember, you can fix noise in post production but you cannot fix blurred wings; it's therefore preferable to push the ISO to freeze the wings in the field and worry about the noise once you put the shots into the computer. Fortunately, I don't have to worry much about noise in the beaming sun in which I prefer shooting.

That's it for now. Cheers!
Posted by Dorian Anderson at 8:49 PM No comments:

Long time readers (i.e. gluttons for punishment) might recall my epic battle with Parakeet Auklet from a few years back. Though that bird frequented Land's End in San Francisco for multiple consecutive summers, it took me four independent bikes rides spread across 2017 and 2019 to add that bothersome bird to my cumulative Bay Area bike list. I said I'd never pour that much into a single bird again, but - sure as you know what - I couldn't help myself when a Glaucous Gull (GLGU) appeared in San Francisco a few weeks ago. The kicker? I already had GLGU for my Bay Area bike list since I saw one in my home San Mateo County in 2017, so I was after the bird purely as a San Francisco bird!
To make a long story short, I chased the SF GLGU three times (November 20, 22, and 26) without finding it. Twice I missed by a matter of minutes, and hindsight suggests the bird gone by the time I made my third trip. I did salvage Evening Grosbeak (EVGR) for San Mateo bike bird #283 on my return ride on my second attempt and a continuing Tropical Kingbird (TRKI) for San Francisco bike bird #231 on my third, so those additions softened the GLGU misses. I say I won't chase GLGU in SF again, but that will probably change if the damn bird surfaces again..... 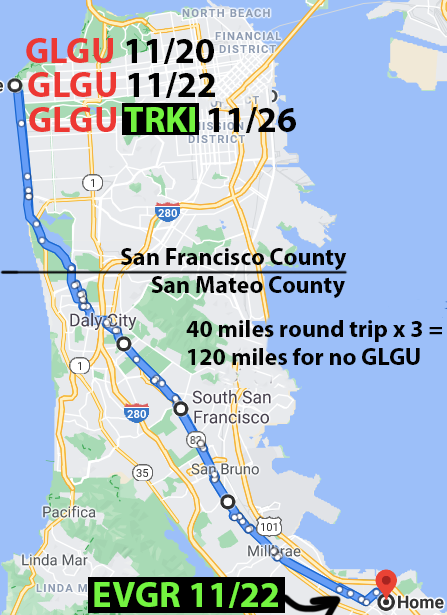 Undaunted by GLGU struggles, I ventured south to Santa Clara County for a continuing Barrow's Goldeneye (BAGO) on November 28th. Fortunately that bird cooperated, and I had prolonged looks at the bird as it foraged on the far side of Shoreline Lake (too far for digiscope photos). That bird added Santa Clara bike bird #214, I birded my way through Byxbee Park and the Palo Alto Baylands on my return. Scanning from San Francisquito Creek, the border between Santa Clara and San Mateo counties, I watched 3 Bonaparte's Gulls (BOGU) fly from the former to the later.  I'd seen BOGU on San Mateo pelagics, but it was good to redeem that 'dirty bird' for a long overdue San Mateo bike bird (#284). The Bonaparte's were even farther away than the Barrow's, so no photo of that bird either.
My ride to Santa Clara County on November 28 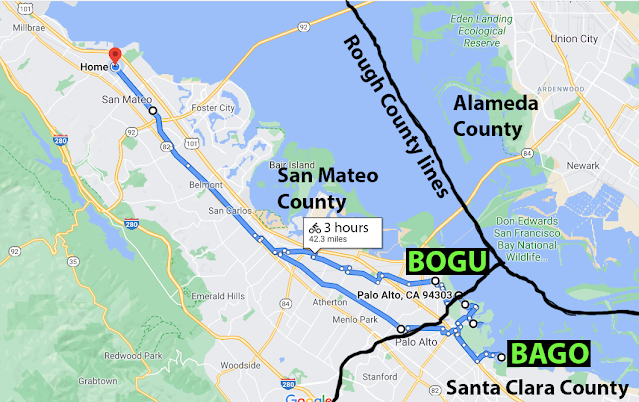 I've since undertaken my two most ambitious single-day rides of the year, but I'll save those for a future installment. I've been giving you a lot of bike-birding lately, so I'll swap in some photography for the next post. Cheers! Here's an old shot of a Bonaparte's Gull from Boston to close down for now. 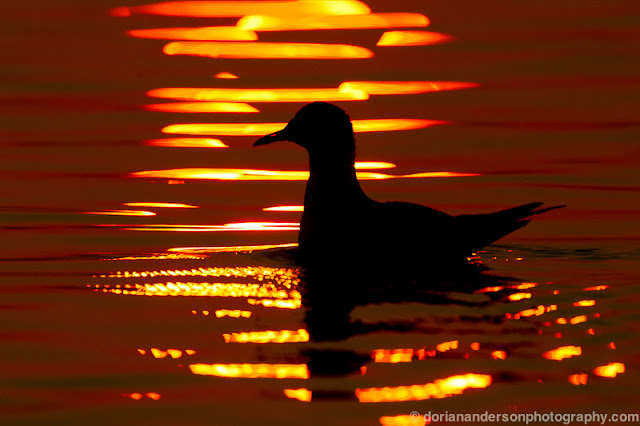 Posted by Dorian Anderson at 8:47 AM No comments: