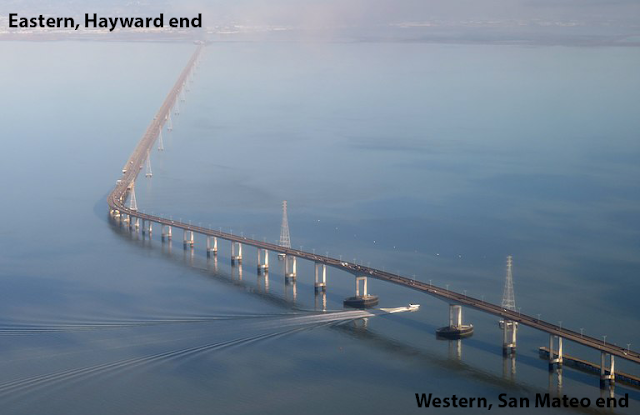 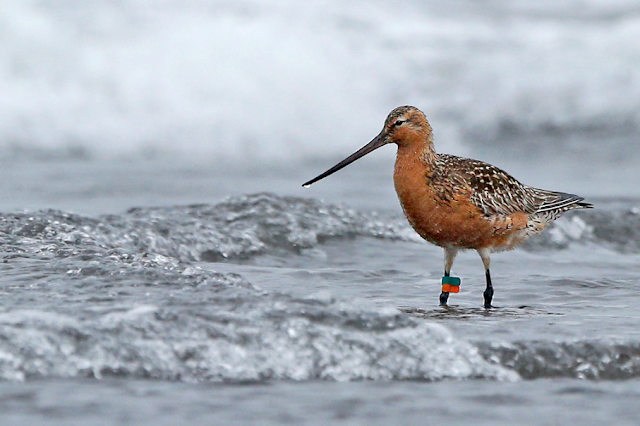 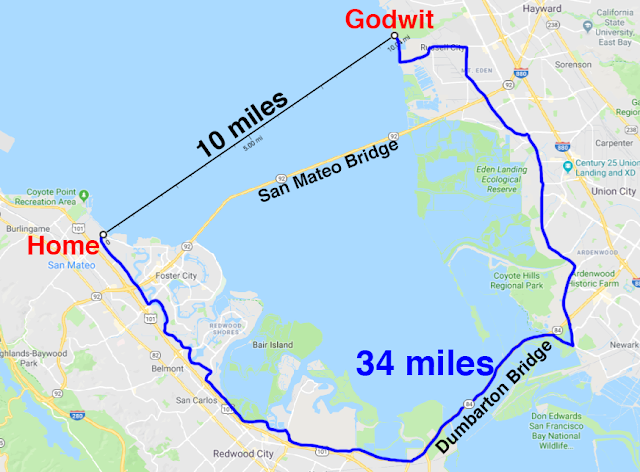 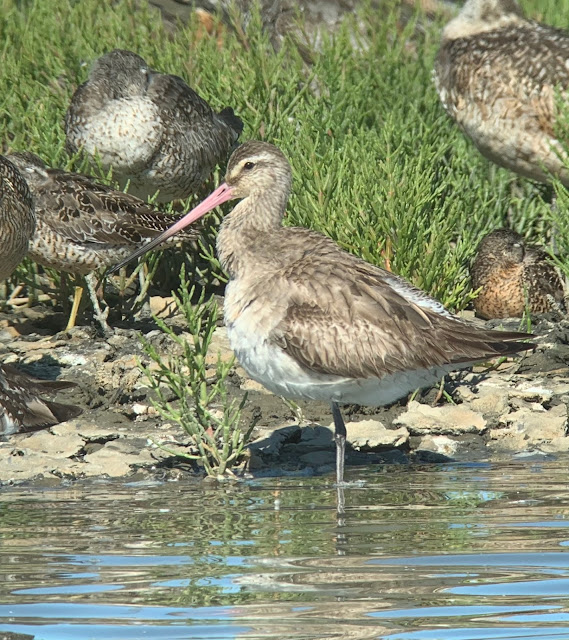 It's worth mentioning the godwit was seen again at 7pm on Tuesday evening (after I'd departed) but not on subsequent days. In this instance, delaying for a day was the perfect move, but I'm sure I'll get burned at some point. It's inevitable in this game......
Posted by Dorian Anderson at 11:53 AM 2 comments:

There have been some epic rivalries in my lifetime: Red Sox versus Yankees, PC versus Mac, the Empire versus the Rebel Alliance. None, however, can hold a candle to Dorian versus Parakeet Auklet, an unrelenting 3-year battle that finally resolved this past week. To fully understand the struggle, I offer the following background and history.


Parakeet Auklets in Alaska. I haven't birded AK, so
Marc Kramer (birdingbybus) hooked me up with this shot. 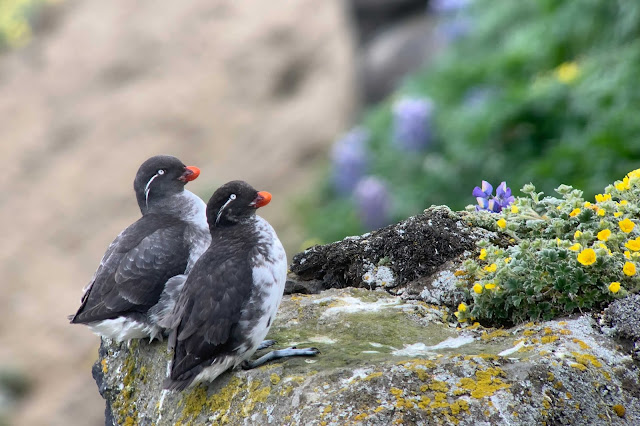 Parakeet Auklet is a small member of Alcidae, a Northern Hemisphere bird family including murres, guillemots, auklets, murrelets, and puffins. Collectively and commonly referred to as Alcids, they share a general black-and-white color scheme, strong underwater swimming abilities, and an endearing terrestrial clumsiness. If you don't think Parakeets Auklets are super cute, then you have no soul.


This one from Tom Ford-Hutchinson, also from Alaska 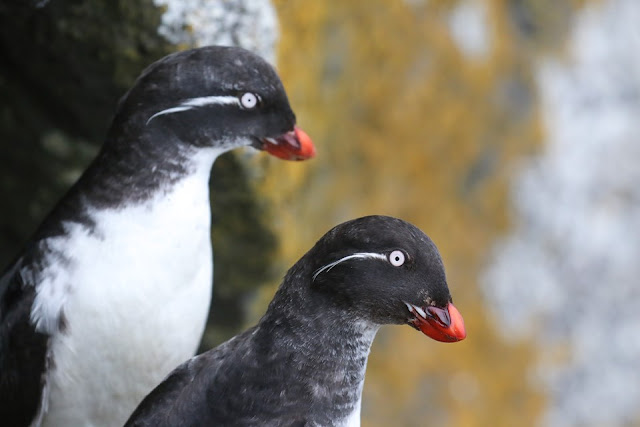 Parakeet Auklets breed colonially on cliffs around the Bering Sea and adjacent bodies but disperse to sea during the non-breeding season. We don't know much about their pelagic wintering grounds, but at least a few reach waters off Washington, Oregon, and California each year. Though there are a few coastal records, but pelagic trips from Westport, Washington offer the best chances of observing this species in the lower 48 states.

Given that background, it was hella unexpected when a representative appeared at Land's End in San Francisco on July 13th, 2016. There is only one eBird record for that bird - likely because it vanished before others could pursue/relocate it - but the unlikely story renews when the presumed same bird reappeared at Land's End a year later, on July 16th, 2017. I'd moved to San Mateo in May, so I jumped into the car and sped to San Francisco with hopes of adding the unlikely auklet to my ABA list. My Bay Area Bike List hadn't become the obsession it is now, and I didn't want to risk the bird disappearing given its brief stay the previous year. I missed the bird on that first try, July 16th, but secured it on my second two days later. Yay.


The area the auklet had favored each July 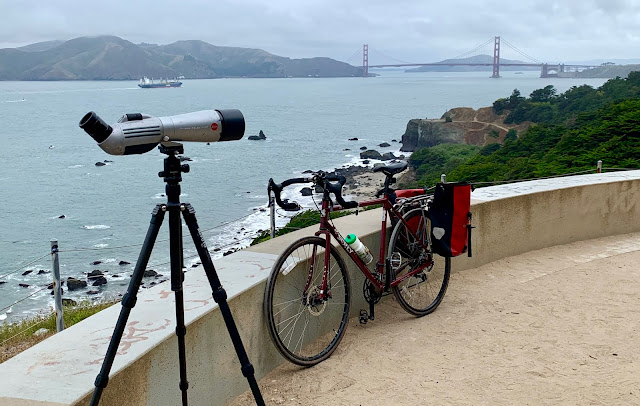 It was really sweet to see such a cool bird outside its usual range, but the euphoria waned in subsequent days, mostly because I knew I could have biked the 46 round-trip miles instead of driving them. Regret eventually overcame me, and I biked back to Land's End to redeem the auklet on July 21st. I was unsuccessful on that day, and I missed a second time on July 23rd before leaving for Philadelphia a few days later. By the time I returned from the East Coast, the auklet had departed. Boo.

I thought 2017 was the end of the story, but the bird reappeared for a third July in 2018. It stayed for the better part of a month, but I was in Colombia during his entire visit. We couldn't properly renew our rivalry with me away, but I could almost hear the bird mocking me from a distance. Ugh.

Fast forward to 2019. The damn thing comes back for a fourth consecutive July, but I'm in Colombia again. (And yeah, I know it's totally neurotic to monitor the CA list while traveling.) Fortunately, the bird stuck around, and I returned to the Bay Area to make another self-powered attempt on the 12th. Result? Miss. Undeterred, I made an additional attempt on the 16th. Result? Another dip. My addictive personality in full effect, I made yet another attempt on the 20th. Result? Booyah!

A group of ten of us had nice views of the bird as it fed and preened in the surf below its favored Hermit Rock. It was really great to share the bird with others, most of whom had missed it previously. The auklet was a tremendous bike-birding triumph, one requiring 5 trips and 230 miles of cumulative riding (46 miles per attempt). I'm sure there will be more chases - bike and car - in my future, but I doubt I'll ever chase another individual rarity 7 times (twice by car in 2017, twice by bike in 2017, and thrice by bike in 2019)!

Post #161 - Recap of my Colombia Photobirding tour for Alvaro's Adventures

My inaugural Colombian Photobirding Adventure for Alvaro's Adventures was an unbelievable success! We found 376 species in 11 days and experienced no logistical snafus save for a local protest blocking one of the main inter-Andean arteries. That impromptu rock-and-log blockade forced an hour detour, but understanding participants absorbed the delay without grumbling. Driving in Colombia - as in much of Latin America - is notoriously inefficient, and roadside drama is par for the course. Whether it's cows crossing the road, an overturned sugarcane truck, or a dancing mob of soccer fans, Colombian travel is always an adventure! 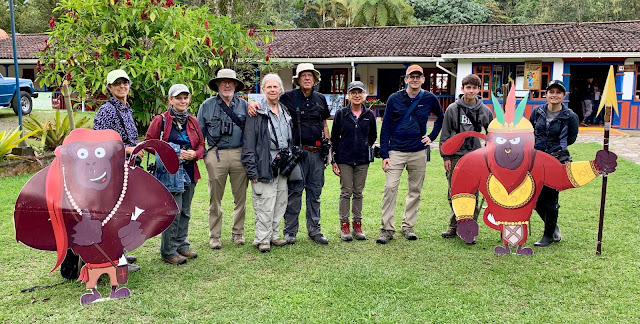 As for birds, our incredible total featured 46 species of hummingbirds, 9 species of parrots/parakeets, 11 species of antpitta (9 seen), 8 species of tapaculos, 24 species of furnarids, 44 species of flycatchers, 7 species of cotingas, and too many colorful tanagers to count. Notably, we tallied 18 Colombian endemics, 15 seen and 3 heard-only.

***all photos taken at sites visited during the tour*** 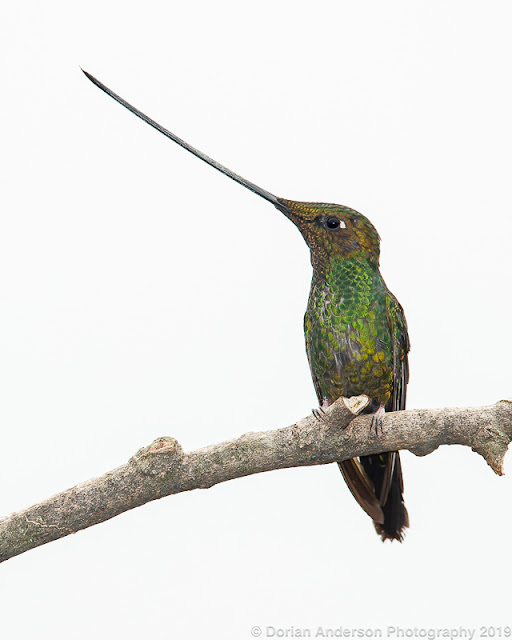 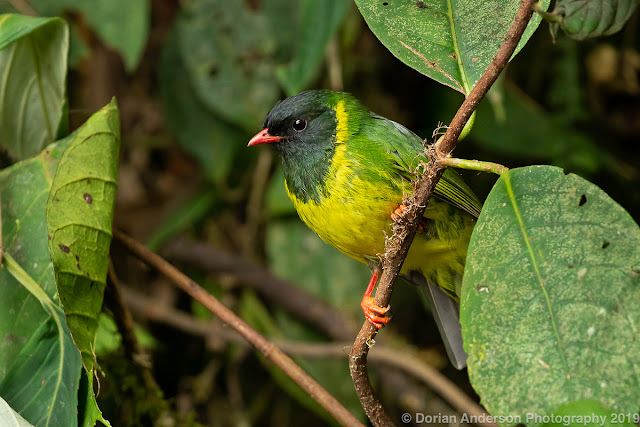 Our tour started in Cali and visited a wide array of elevational habitats between 3,000 and 13,655 feet in the Western and Central (930 to 4,138 meters) before terminating around Manizales and Pereira. For those unfamiliar with South American topography, it is vital to understand that the Andes trifurcate into three discrete ranges in Colombia. Species have evolved independently in each branch, and most of Colombia's endemics are found in and between the three ranges (all but one of the rest - Chiribiquet Emerald - evolved in the isolated Santa Marta Mountains on the Caribbean Coast). With time in both the Western and Central Andes, we were afforded a very wide sample of Colombia's diverse and highly-specialized avifauna. 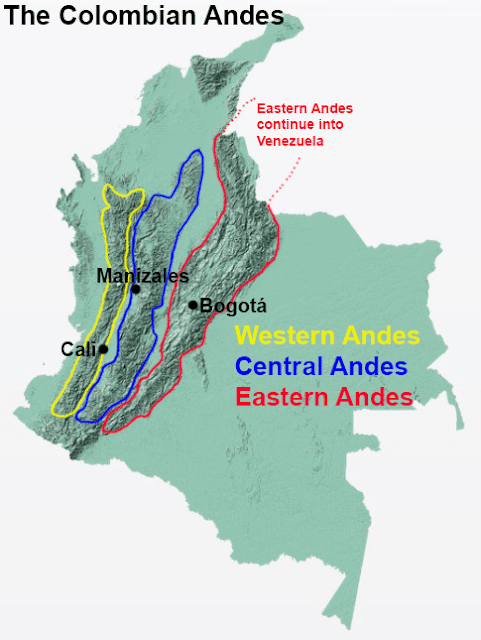 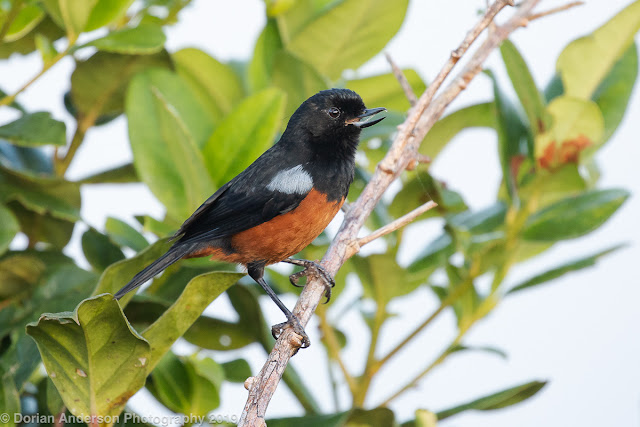 We designed this tour with photographers in mind, and clients had fabulous photo opportunities at many of the sites we visited. All participants birded together in the mornings, and the two die-hard photographers usually split off to do their thing at lodge feeders in the afternoon. The balance worked really well, and even self-described 'hardcore' birders had their cameras glued to their faces for much of the trip. With point-black views of so many incredible birds, everyone went home happy! 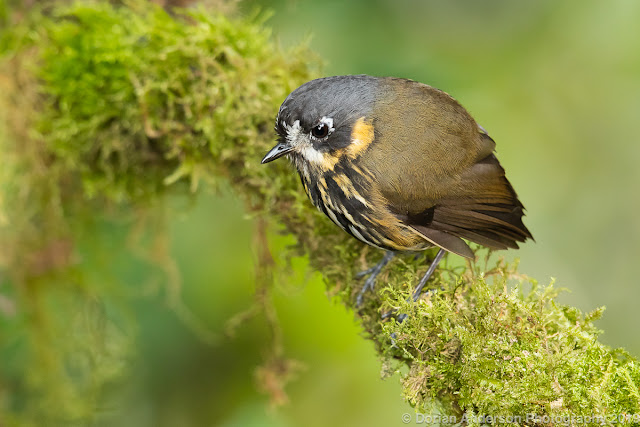 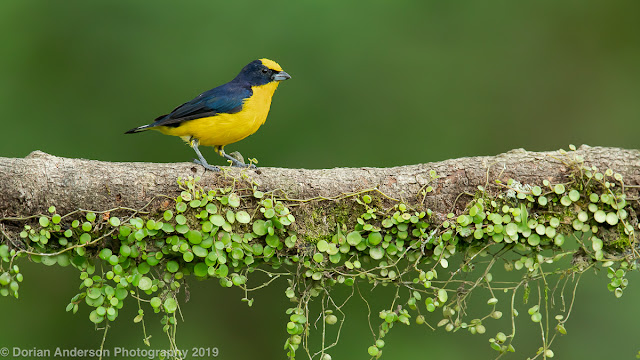 So, that's a very cursory overview of what transpired on our tour, none of which would have been possible without our wonderful ground operator Andre Beltrán of Birding and Herping. She was brilliant with the birds and a master of logistics, and I cannot praise her personality and professionalism enough. Andrea, Alvaro, and I are already planning next year's iteration; it will run late-June into early-July and probably be a day longer than this first run. Please contact me if you are interested in securing a spot. We only took 8 clients this year, so book early to make sure you aren't left behind!

It doesn't get any better than Termales del Ruiz!

Birders enjoying dinner at Tinamu Lodge.
Spectacled Owl flew in while we were eating! 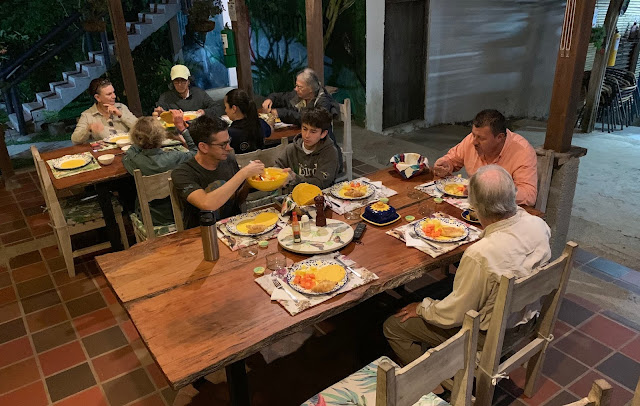 You get the idea. Colombia is awesome. Come with us next year. And in case you're still waffling, here are a few more shots to convince you! 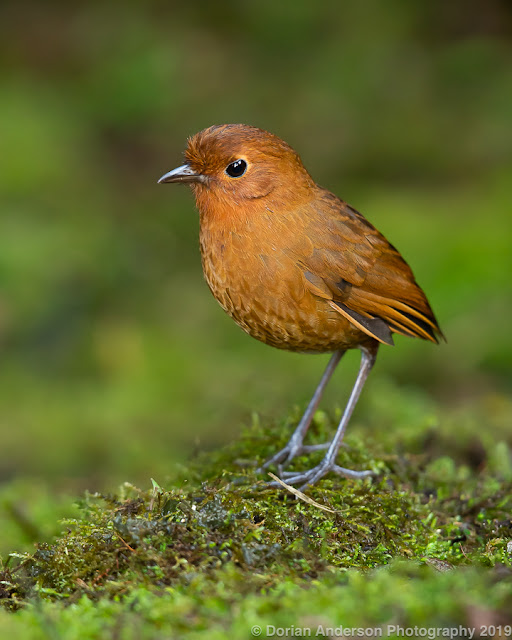 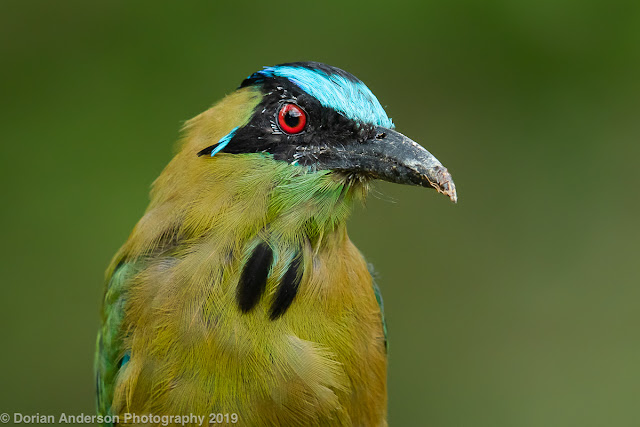 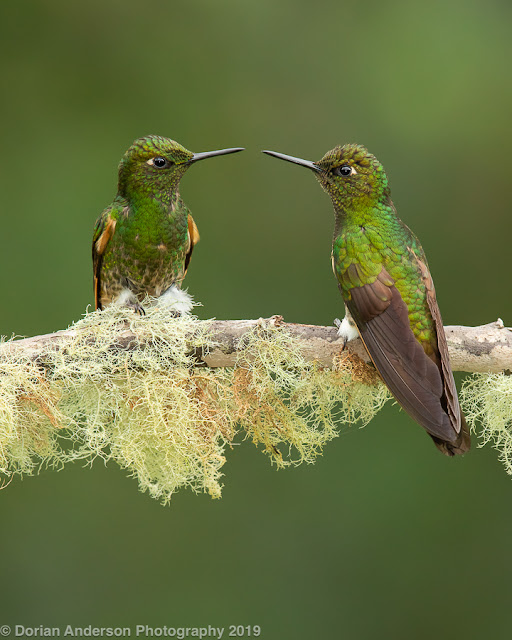 Posted by Dorian Anderson at 11:14 PM No comments: