Post #64 - Blue and white with a touch of rufous

I am actually on a roll with some of my other writing at the moment, so I am going to keep this post short and sweet since my efforts are required elsewhere right now. That being said, I did have several nice birding outings this weekend, and I walked away with two decent photos. I thought these were a fun compliment to one another since the sandpiper photos is a white bird against a white background and the grosbeak photo is basically the opposite. The touches of rufous tie the photos together nicely! 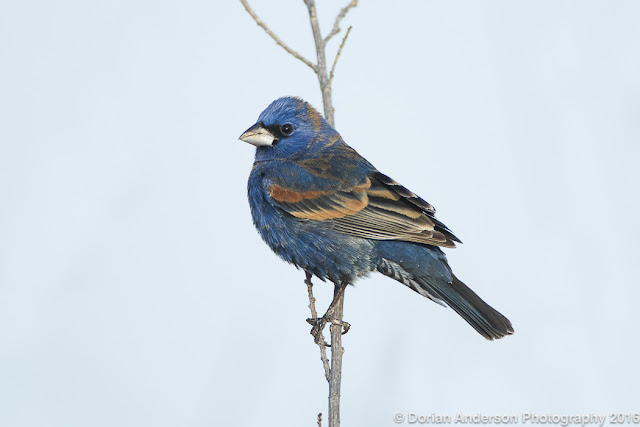 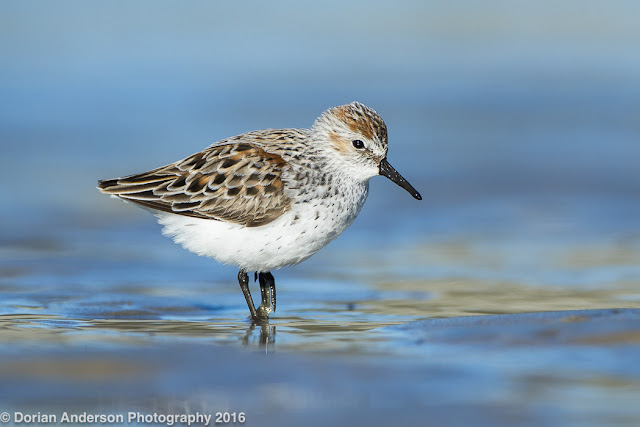 Anyway, sorry for the short post, but things are are really hectic right now. I'm getting married next month and trying to polish off the second draft of my book - on top of working 60hrs/week. I'm just lucky I can even find time for a few hours of birding each week! I am really looking forward to having the book done as that will free up much time that can be directed into this blog. At that point I hope the blog will evolve a beyond what is now closer to an online birding journal. I would really like write more about the state of birds and the environment and to have more content that is less Dorian-centric. The book is moving, but its a huge project. It will certainly run through the summer.
Posted by Dorian Anderson at 9:59 PM No comments:

Post #63 - From Kansas to New York City. Be proud of your local birds! Yay Public Lands!

OK, sorry to take so long for this week's entry, I've been away for the last few days. There isn't really a central theme to this week's post, but I've got some interesting birding related observations that I want to share nonetheless. I'm going to touch on a couple topics. These will include:

1) Freedom from photography
I traveled to Kansas City this past weekend. Unfortunately, the talk that I was scheduled to give on Saturday the 9th was cancelled ten days prior due to logistical issues. As my ticket was already booked (and onto New York afterwards), I went along for 2 days of plains birding despite the cancellation. I was hosted and shepherded around by several KC birders, most notably the incredibly entertaining John Mallery. We spent the better part of both days birding a number of local hotspots, notably Shawnee Mission Park and the KPCL Wetlands on Saturday and the Baker Wetlands and Clinton Lake on Sunday. While it pained me to leave my camera behind for this short trip, it turned out to be an incredibly freeing decision. Without concerns of perfect lighting and avoiding other people, I had a very relaxed and social weekend of birding. When I'm in "photo-mode" I get so focused on getting a particular shot that I sometimes stress myself out getting it (or not getting it as so often the case). This isn't to say I'll be voluntarily shelving my camera any time in the near future, but it's nice to know I can enjoy myself without it. 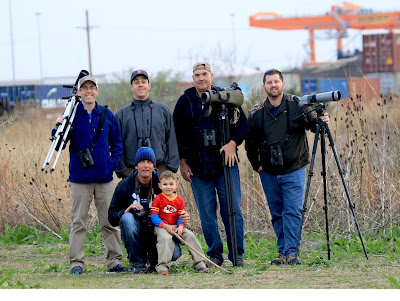 What do you think Toto - Swainson's or Red-tailed? 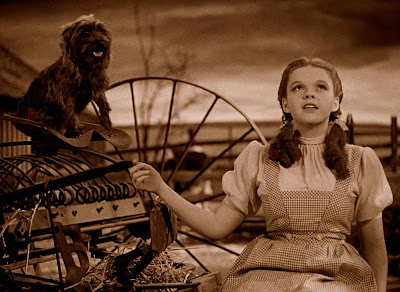 2) Be proud of your local birds
At one point in the weekend, someone posed the following question:

"The birding here in Kansas must be pretty boring compared to Southern California, huh?"

"I don't know what the heck you're taking about?!?!? Where in California can I see American Golden-plover and Upland Sandpiper in the same field?!?


Roadside birding in outside Lawrence, Kansas 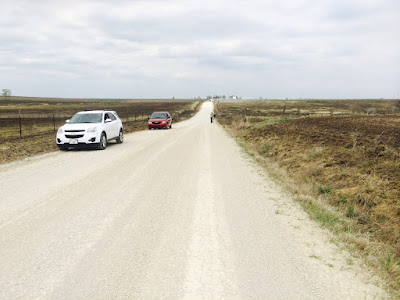 Sure, there is more bird diversity in coastal California than in land-locked Kansas; That shouldn't come as a surprise to anyone. But, there are certainly birds that can be seen easily in Kansas that might be very difficult or impossible to see in California. Also, the wide open and sparsely populated landscapes in Kansas are completely different than the painfully crowded sub-urban sprawl of Southern California. Birding is often as much about setting as anything else, and in that respect the farmlands were a nice change from my usual haunts. You live where you live, and sure, there might be more exciting birding elsewhere, but hey, you work with what you've got, right? Just remember, something that might seem ho-hum to you would probably really excite someone else. Hell, I was stoked to see Greater black-backed Gull in New York City on Monday! We don't have those out west! For the record, I flew onto NYC to give a lecture at the American Museum of Natural History (AMNH) on Tuesday night. That's how I went LA > KC > NY > LA in just four days.


Speaking for the Linnaean Society at the AMNH in NYC 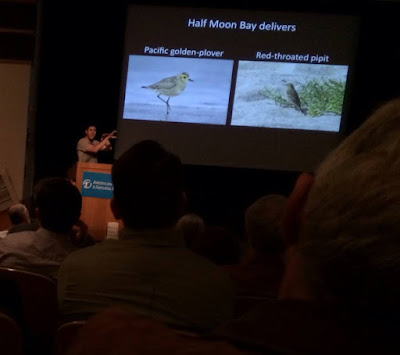 3) The birding benefit of public lands
There is one aspect of birding in Kansas that is particularly frustrating: the lack of public lands. Public land is land that owned by the state and federal governments (National Forests, e.g.). Lands that aren't public are private, and that generally means they are off limits to recreation - birding included - unless one knows the landowners personally. Less than 1% of the land in Kansas is publicly held. This places Kansas 48th out of 50 states in this category; Only Iowa and Connecticut have less public land. Nevada, with over 81% of its land publicly held, might surprisingly lead the list (Here is where I got these statistics). In general, the lower the percentage of public land, the more access problems exist. This helps to explain why we spent so much time birding from farm roads this past weekend. The few reserves that did exist were tiny compared to the huge tracks of accessible lands in more western states. This is currently a very politically charged issue as some folks, notably Ted Cruz and the Malhuer Maniacs, who respectively advocate that public lands either be sold to the highest corporate bidder or simply given to those souls who desire them. Sorry to get political (I have been trying SO SO SO hard to keep politics out of this blog), but in this particular instance the agenda of the mentioned parties so directly clashes with long term interests of birds, birders, and the environment that I think it warrants mention. 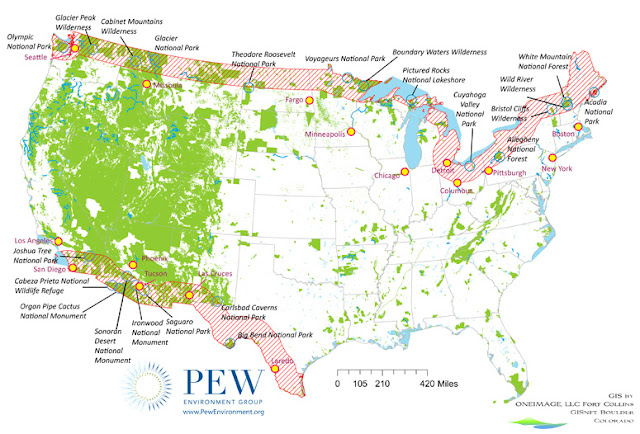 Anyway, just some thoughts for you on this mid-Apri day. My parents attended my talk in NYC, and I even got my mom out for a few hours of Central Park birding. She like the White-throated Sparrows, newly minted in their spring finest. She's not a hardcore birder, but she does have a feeder in the backyard so she knows a few things.


Mom and me in Central Park
She'll inevitably give me crap for posting this..... 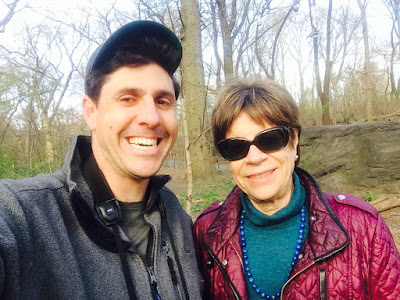 Posted by Dorian Anderson at 11:22 PM No comments:

Sonia and I headed out to Anza-Borrego Desert State Park this weekend. For those not familiar with the park, it is located about 35 miles west of the Salton Sea (map below). While birds were certainly a focus of this weekend, flowering cactus were our main quarry. We actually missed the peak of the action about two weeks ago, but there were still a ton of flowering spiny-things of various sorts for us to enjoy. For those that want to replicate something similar in the future (which I highly recommend), I would aim a bit earlier, say the 2nd or third weekend in March. Here is a link to a very thorough and up-to-the-day wildflower website (cactus too!) that I found particularly helpful in planning our visit. I last visited Anza in November. I included a bit more info on the park and area in that post should you want to check it out. 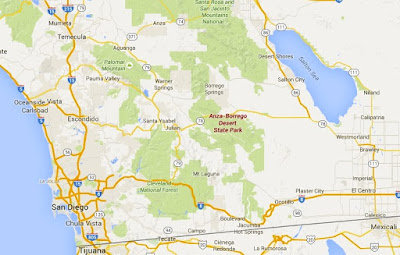 We arrived Saturday midday and took a series of short hikes to explore the area. I will say that the area around the park's Visitor's Center was uber-busy, but as soon as we got away from that area it was completely possible to carve out our own space. We ditch camped at Yaqui Wells, a short distance from the more well-established Tamarisk Grove Campground. It is also worth noting that we drove several of the park's dirt roads in our 1999 Volvo without much incident. 4-wheel drive would certainly allow access to other areas, but we could quite easily drive the first quarter mile of most of them so as to get away from the busier, paved roads. Temperatures topped out between 85-90 degrees with basically zero humidity. Anyway enough logistics, let's see some plants!

Sadly, I used the best light stalking birds with my 500mm on the 7D2, so the plant and landscape photos were all taken with an iPhone long after the best light disappeared. Next time I will be certain to bring a second body on which I would keep either a landscape or macro lens. Sonia took most of the below photos, to give credit where it's due. 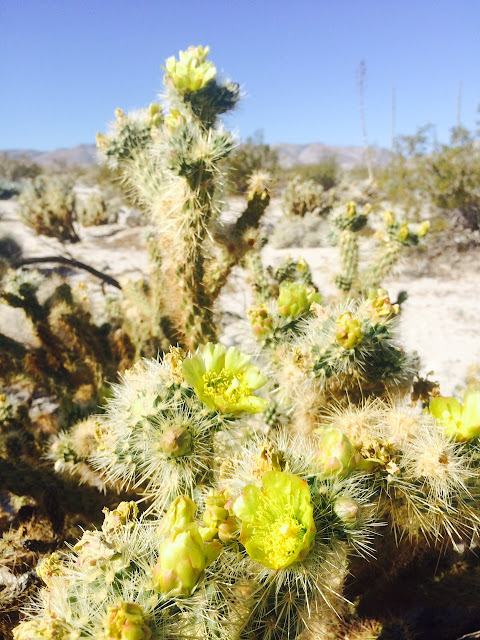 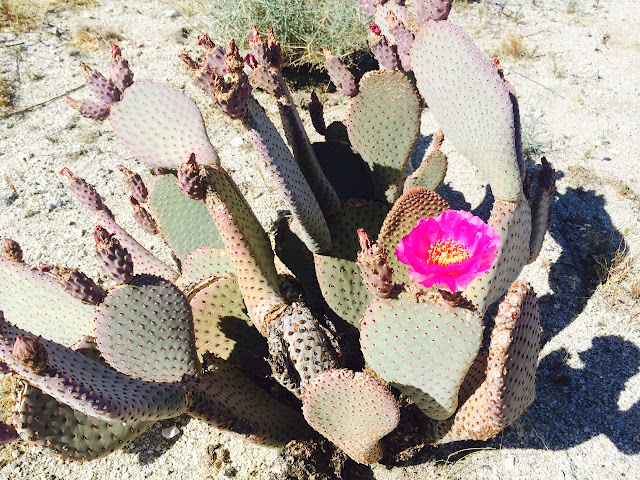 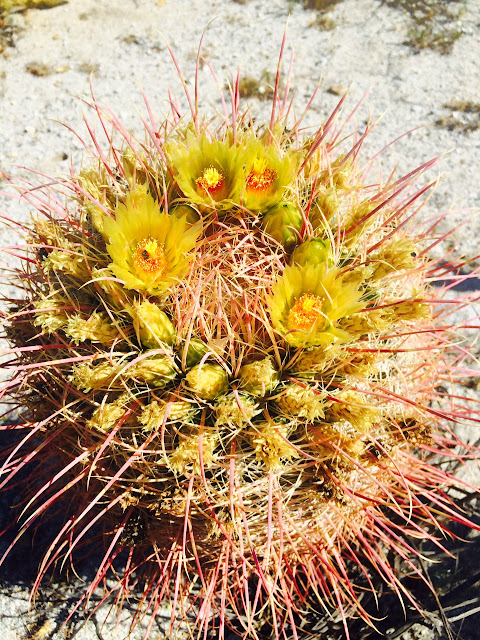 Love hurts (same cactus as above) 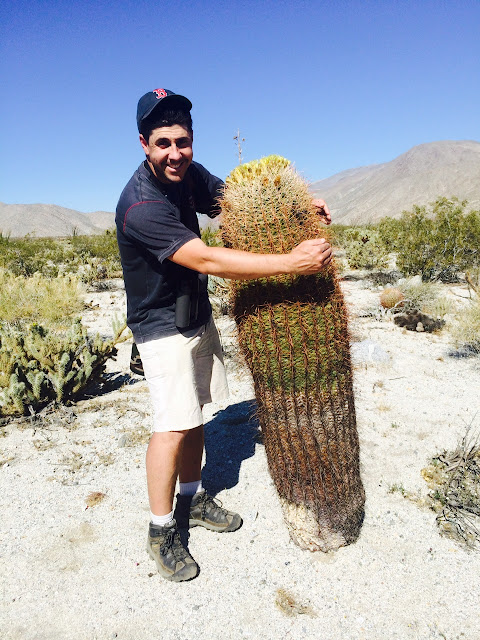 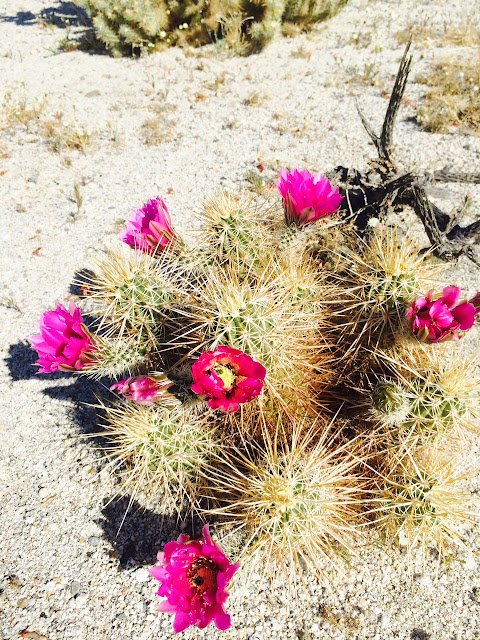 Me with flowering Ocotillo 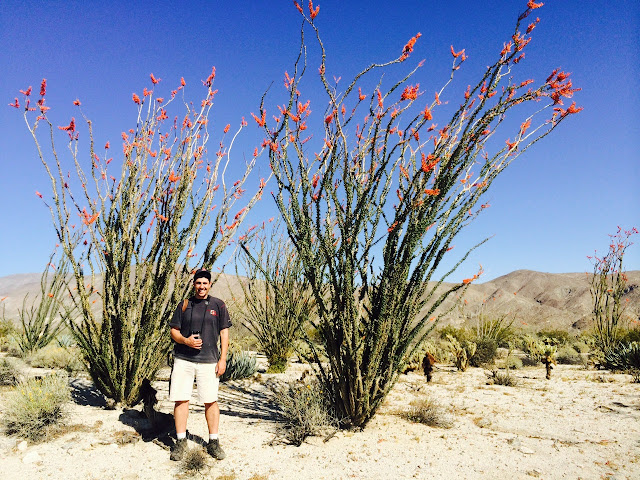 A miniature Sonia with flowering Agave 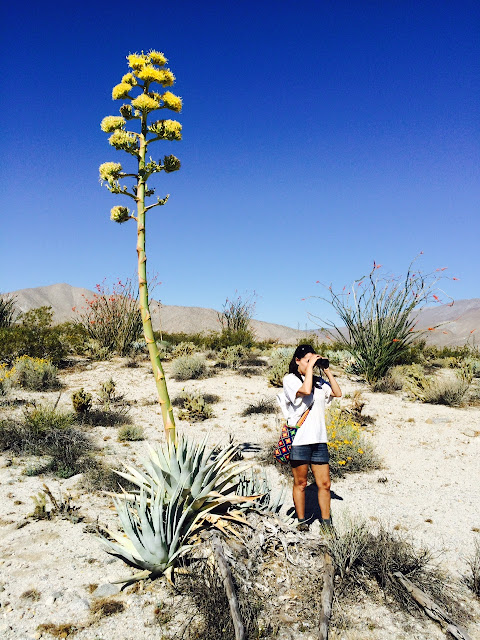 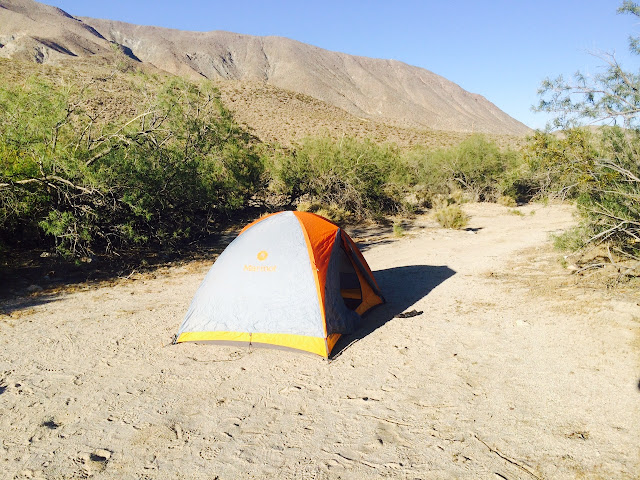 Anyway, you get the general idea by now. I have spent quite a bit of time in the desert before, but no visit was as impressive as this one. I would highly suggest a visit to ABDSP next spring. As for birds, we had Phainopepla, Gambel's Quail, Costa's Hummingbird, Black-throated Sparrow, Greater Roadrunner, Verdin, Brewer's Sparrow, and Cactus Wren. The species list is very limited but that is to be expected in a specialized environment such as this. My goal for the weekend was to photograph Cactus Wren, hopefully on cholla. Well, that plan failed miserably, but I did manage this instead. I always say that all I want is one good frame per weekend; I think this qualifies! 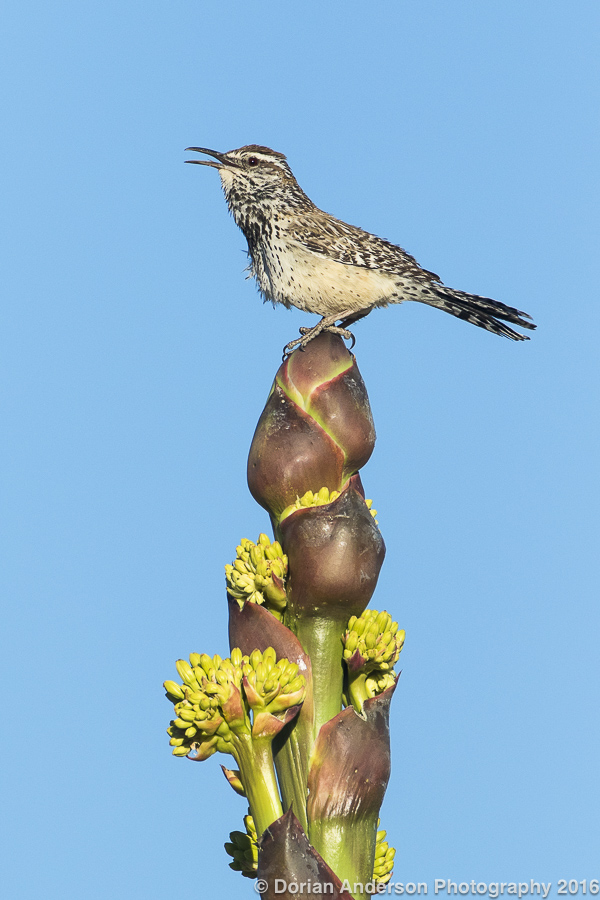