Quick note
This is the first post in my Birding in New Zealand series. Like the others (linked when completed), it is meant as a permanent online resource, is very long and detailed, and will be archived in the International Birding Resources tab under the main banner heading. The other posts in the series are:
Post #154 - Birding in NZ, part 2: Endemics and suggested South Island Routes
Post #155 - Birding in NZ, part 3: Stewart Island
Post #156 - Birding in NZ, part 4: Kaikoura and pelagics

Overview
Thousands of miles from anywhere but Australia, New Zealand offers great birding and fantastic scenery in an English-speaking and easily-navigable environment - provided visitors are comfortable driving on lefthand side of the road! Few places on earth have better tourist infrastructure, and everyone from backpackers to luxury travelers will find something suiting their budget and needs. I just returned from 17 days on the South Island, and I will use this post to outline some general considerations as you plan your own New Zealand adventures. More birding-specific posts will follow, so be sure to check back for those in the near future. 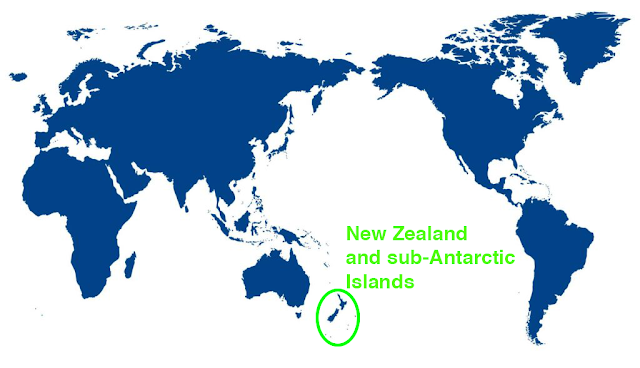 A quick bit of natural history
Originally associated with the Gondwana supercontinent that included South America, Africa, Antarctica, and Australia, Zealandia broke away from those geographies between 65 and 85 million years ago (the split formed the Tasman Sea). Most of the ancient landmass remains submerged beneath the sea, and geology suggests the raised bit we today know as New Zealand was probably underwater for hundreds of thousands or millions of years. Importantly, Zealandia went its own way before terrestrial mammals evolved (~ 50 million years ago), a point I'll consider further below. 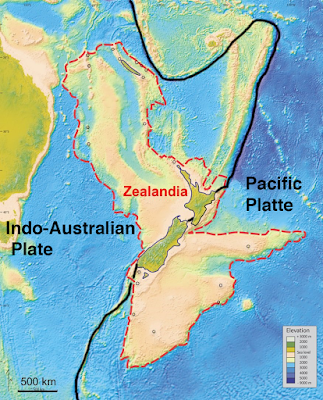 When tectonics and volcanic activity finally pushed a prototypical New Zealand above the Pacific waves, birds arrived from Australia (presumably) and took all sorts of evolutionary forms without the selective pressure of terrestrial mammals. Some species went so far as to dispense with flight altogether. Kiwis are New Zealand's most recognizable flightless birds, but Kakapo, a ground dwelling parrot, and Takahe, a large rail, are other notable examples. The New Zealand Falcon retained flight but oddly nests on the ground. Though bats and seals reached New Zealand, an absence of terrestrial mammals - and a general dearth of reptiles - guaranteed New Zealand's flightless birds thrived in pre-colonial times.

Everything changed when Polynesians and Europeans arrived in the 13th and 18th centuries, respectively. The huge and cassowary-like Moas were quickly hunted to extinction, and many species suffered terminal or -near-terminal declines at the hand of introduced predators such as mice, rats, possums, weasels, stoats, and others. Herculean conservation efforts have been initiated to protect particularly vulnerable species, and the country had set the ambitious goal to be predator-free by 2050. 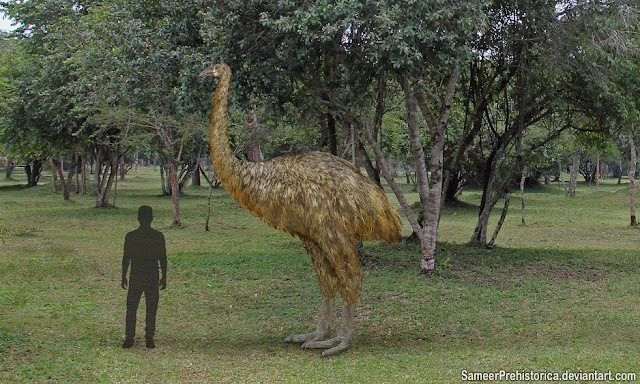 Contemporary avifauna
Though much unique speciation occurred prior to the arrival of humans, New Zealand hosts comparatively few bird species. Approximately 350 species have been eBirded from New Zealand, and a life list of 200 seems quite respectable. However. what New Zealand lacks in numbers it makes up in endemics; ~51 are found on either the North, South, or both, and  ~17 additional are possible when Chatham Islands and the sub-Antarctic islands - Antipodes, Snares, Bounty, Aukland, Campbell - are included. For reference I saw 32 endemics in 17 days (without a ton of effort). 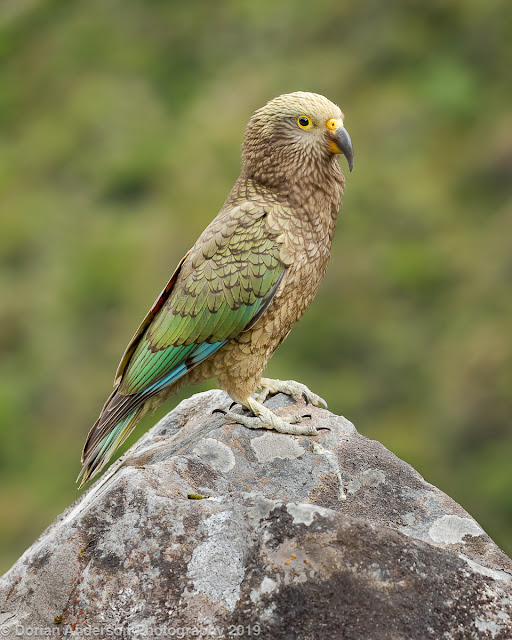 The country is also fortunate to host an incredible number of pelagic species, and visiting birders are strongly advised to undertake as many pelagic trips as possible. Don’t worry - with deepwater very close to shore, most NZ pelagic trips last 3 to 4 hours and rarely venture more than a few miles out to sea. It's not uncommon to see 6 species of albatross in a few hours. Three species of penguin are possible (even likely) on the mainland, so there's that as well.

Planning your visit
New Zealand is comprised of two major islands, North and South, that are together about the size of the United Kingdom. While there are certainly some differences at the birding level, both islands are wonderful. Spectacular scenery abounds, but the South’s more rugged terrain and thinner population make it more favored by birders and general outdoor enthusiasts. Just 20 miles from the mainland, Stewart Island is a must for anyone making it to the south end of the south island. It's an easy ferry ride from Bluff on the mainland with good pelagic birding en route. The island town of Oban is charming, and the surrounding area is the best place in the country to observe kiwi (Southern Brown). I'll have a whole post on Stewart Island coming soon. 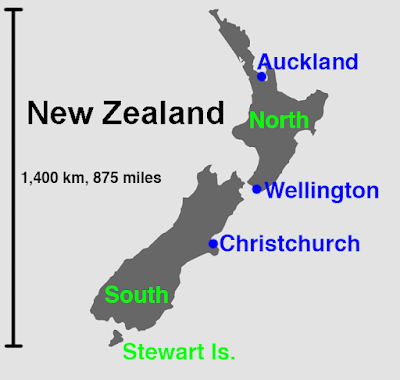 Size comparison of the US, NZ (blue), and UK (pink) 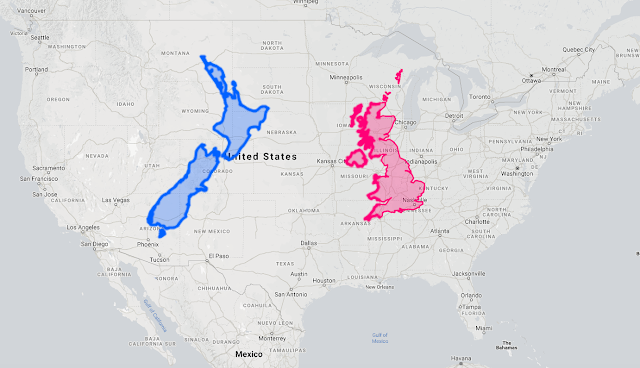 Two considerations make planning a trip to New Zealand is a bit tricky: proximity and size. New Zealand is really far from the West Coast of the United States (and Europe) and offers much more to do that its small size suggests. You will  find most of the key birds on North and South Islands with 2 to 3 weeks, but you'll kick yourself if you spend all your time birding and forgo the hiking, scenic cruises, vineyards, and extreme sports (skydiving, bungee jumping, etc) that make New Zealand one of the world's premier outdoor destinations. You do not want to rush, so I’d advise doing New Zealand in two discrete trips with at least 14 days on each island. I know that’s not possible for most, but shorter trips - especially those visiting both island in under two weeks - will miss the best of what the country offers. 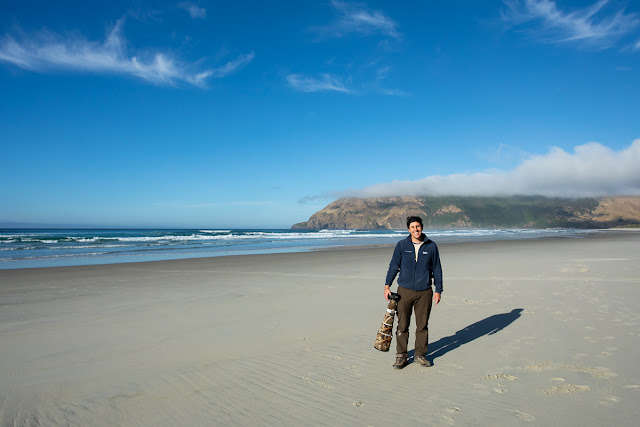 There are prefabricated/existing birding itineraries - usually 14 to 20 days - that sample the best of both islands (including Stewart and pelagics), but they move around a lot and miss the more generally outdoor awesomeness that is New Zealand. So, you need to decide if you want to go on a whirlwind birding tour or take a slower-paced and more exploratory course on your own.

Skydiving in Queenstown. We jumped from 15,000 feet.
We had a blast with NZone! 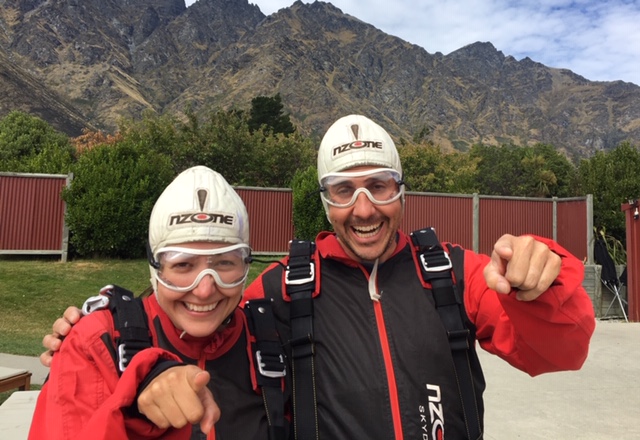 Bonus destinations
Chatham Island, ~500 miles east of the South Island, is home to a handful of highly specialized endemics found nowhere else in New Zealand. However, Chatham requires an additional flight, necessitates complicated logistics, and is very expensive, so it's only for hardcore listers. The sub-Antarctic Islands take those caveats to greater extremes, but know they are there for the uber-adventurous and financially-able! 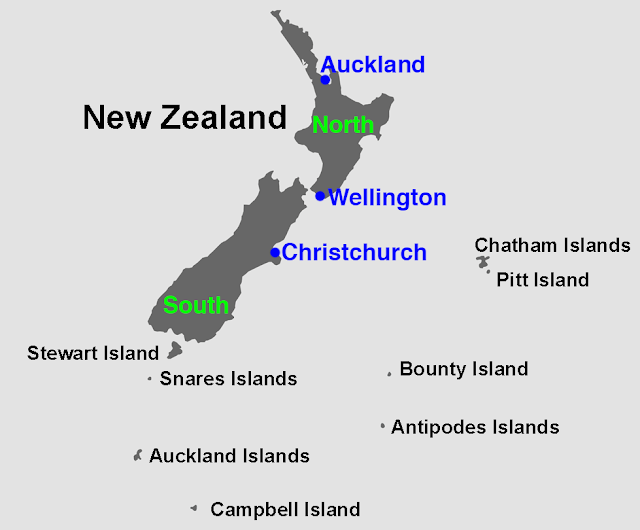 When to visit
New Zealand is in the Southern Hemisphere, so the seasons are reversed compared the United States and Europe. Spring is September through November, summer is December through February, fall is March through May, and winter is June through August. High season is usually November through March. Summer is the most expensive and crowded time to visit, Christmas being the absolute peak season. The endemic birds are around all year, so you'll see them whenever you come. Pelagic birding is also excellent year-round. 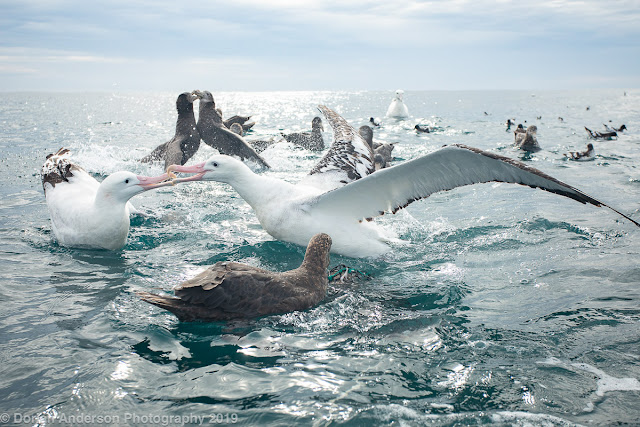 Avoiding summer gives you more flexibility as places and activities tend to book up well in advance during that most popular season, campsites included. It's really nice to have day-to-dat flexibility depending on what birds you find and what the weather does. Save for the Stewart Island Ferry and our accommodations on that outpost, we didn't reserve anything more that two days in advance. Temperatures on our trip (March, South/Stewart) fluctuated between 75 degree during the day and 45 degrees at night. We had a bit of rain, but nothing crippling.

Fortunately, every season is wine season in New Zealand 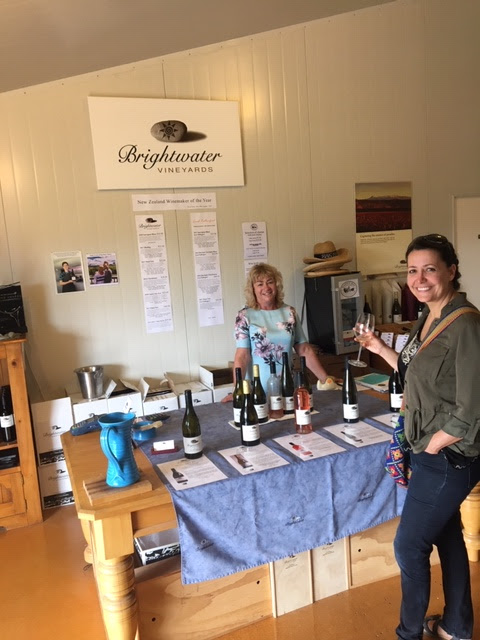 Driving and rental cars
Assuming you can manage driving on the lefthand side of the road, driving in New Zealand is a snap, particularly on the sparsely populated South Island. Roads are in fantastic shape, and local drivers are courteous. It’s an incredibly relaxing place to drive, and having your own wheels will let you explore the country’s backroads and deserted beaches. It’s absolutely amazing to have a five-mile beach completely to oneself!

All the major rental companies operate out of the Auckland, Wellington, and Christchurch airports. We flew into the last, rented a small car, and drove ourselves around. It was easy. Gas is expensive, nearly $6 US a gallon, so rent a small and fuel-efficient car. We didn't need high clearance or four-wheel drive anywhere we went.

Our little hatchback did fine everywhere.
Too bad it wasn't speckled! 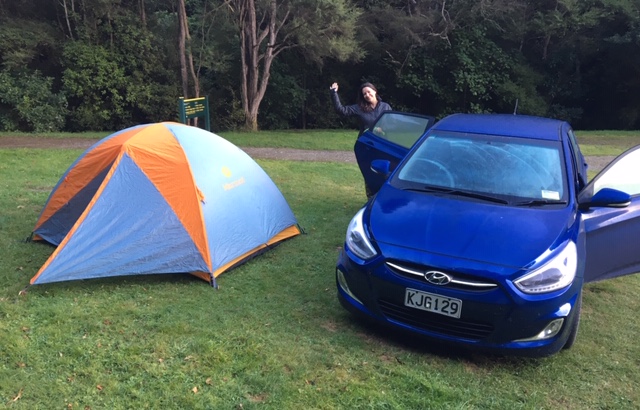 Camping
New Zealand is very well set-up for camping, and campgrounds and camper van rentals are everywhere. So, those wanting to chart a more rustic or individualized course can certainly do that. Sonia and I lived out of our rental car, camped 8 nights, Airbnb’d 8 nights. It was all very easy. Be advised that New Zealand immigration policy is very strict; given the country's history with introduced species, they are hyper-vigilant about plant and animal hitchhikers. Expect your tent and hiking boots to be thoroughly inspected upon your arrival, and budget extra time (maybe 30 mins) during immigration in Aukland if you have a connecting flight to somewhere else. The Department of Conservation maintains campsites all over the country. There are  also loads of private campgrounds (mostly called Holiday Parks, equivalent to KOA-type campgrounds in US). 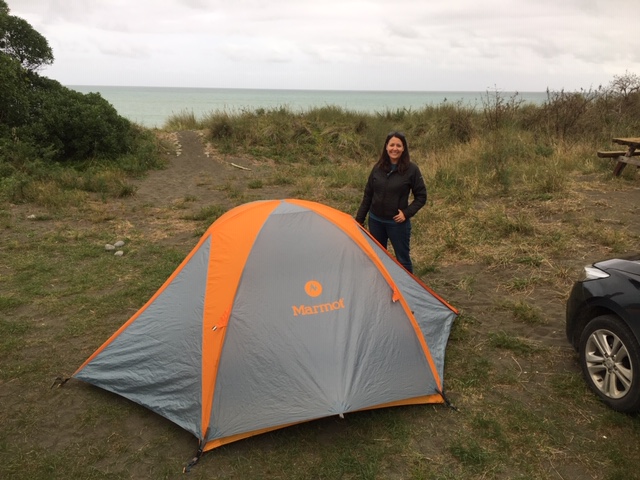 Hiking
Called ‘tramping’ locally, hiking is a basically a national pastime. There are hundreds of wonderful day hikes, and the more adventurous should lookin into the multi-day Great Walks. Those are really cool since you can stay in established backcountry huts along the way. Those visiting strictly for birding purposes are advised to skip hiking as all the sought birds can be found without the physical exertion the activity demands.

There's no shortage of scenery in New Zealand 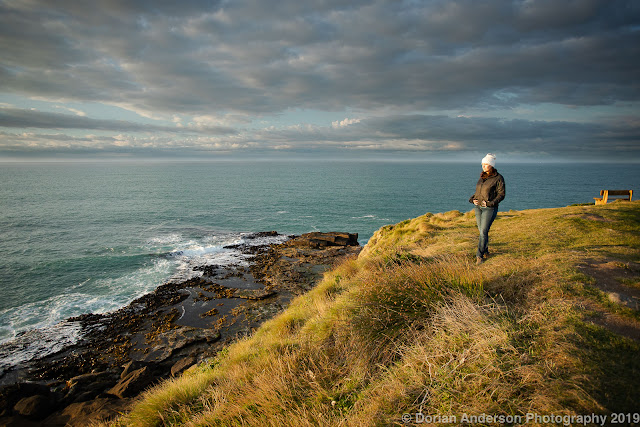 Safety
Safety is a virtual non-issue. Kiwis are incredible friendly people, and there are always other travelers around to lend a hand. Hitchhiking is common and safe, even for women. We picked up a lovely German woman and had a wonderfully engaging discussion of international politics between Te Anau and Queenstown.

Oh, and unlike neighboring Australia where everything can kill you (crocodiles, spiders, snakes, cane toads, Bundaberg Rum, nothing beyond the occasional mosquitos or sand fly will bother you in New Zealand. There aren't even ticks! You can walk wherever you want without concern. Humans pose more threat to wildlife than the other way around (sadly, probably true everywhere these days), so please be careful wherever you go!

Slow down for kiwis! Food
Fish and chips are everywhere. Need any thing else? Seriously, though, we ate better in New Zealand than anywhere we’ve traveled. With so many backpackers around, something affordable  and usually decent - is always within reach. There are also many fine dining establishments, so folks with the budget for those will enjoy them. New Zealand wine is apparently fantastic (I don't drink), so try to make time for a few winery lunches. Though the cuisine everywhere is very meat forward, vegetarians should be able to survive, particularly at the many Asian restaurants. 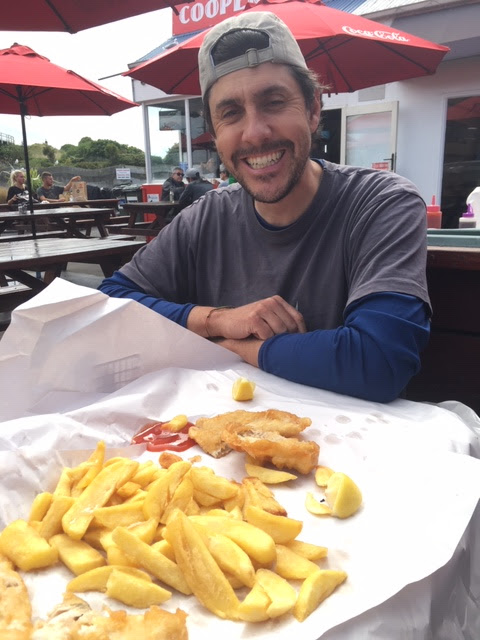 OK, that's it for the moment. I hope someone finds all this useful! IN the next installment, I'll focus exclusively on the South Island birding. Please come back in about ten days for that....
Posted by Dorian Anderson at 12:33 PM