I wish I was reaching you under different circumstances, but I hope this post offers diversion against coronavirus/COVID-19-prescribed inactivity. I've been on the bike a lot this year - 716 miles on a date when I'd logged < 300 last year - and I'll use this post to highlight my recent county-birding exploits, the game of maximizing species totals in each individual municipality (below table). The San Mateo section is a bit involved, but the Santa Cruz, Santa Clara, San Francisco, and Alameda are comparative snippets. If nothing else, check out the maps to see where I've explored.

San Mateo County
I'll start in my home San Mateo County where I had 264 species of of January 1st. Minus quick late-afternoon spins around Coyote Point park behind my apartment, I don't do much bike-birding in my home county because I'm focused on exploring farther afield. That said, I've had two epic days of San Mateo bike-birding this calendar year, those yielding a combined 7 new birds. I chronicled the first of these, January 14th, in a previous post, but I'll offer the following map as a reminder.


My January 14th ride down the San Mateo Coast 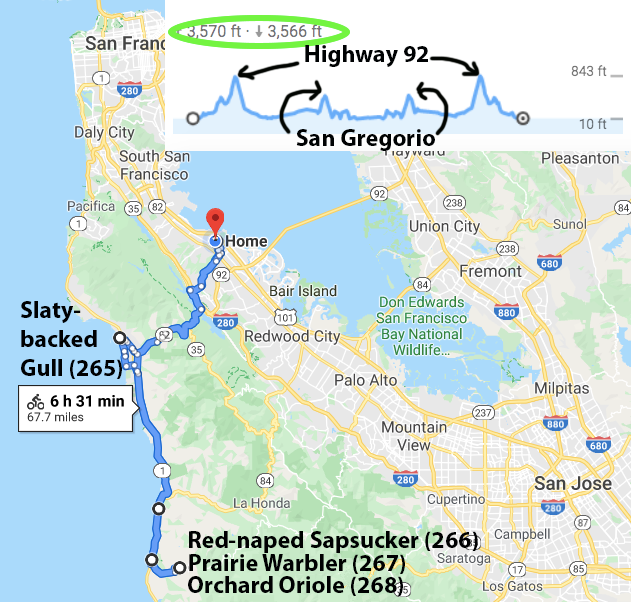 More recently, on March 13, I rode a very similar but slightly-longer route in pursuit of a continuing dark phase Rough-legged Hawk at Pigeon Point. Reaching Pigeon is rarely a problem, but returning home is usually a royal pain-in-the-ass because the prevailing northwest winds build through the afternoon and impede my return. Rather than ride into headwinds when I am tired, I only ride to Pigeon on south winds; there's little impediment early in the day but I get a nice push going home (see below graphic). The one caveat is south winds imply rain, so I have to know I can get down-and-back before it starts pouring. We had no rain - and hence no south wind - in February, so that's why I waited so long to pursue the long-staying hawk. 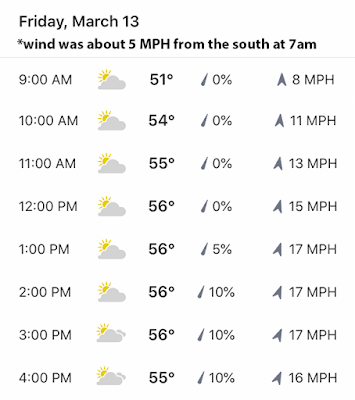 It took 2 hours and 40 mins to overcome the coastal mountains and cover the 35 miles to Pigeon, the wind gathering through the 9am hour, and a quick scan of nearby power poles revealed the hawk as I arrived. Can't beat a short search after a long ride! 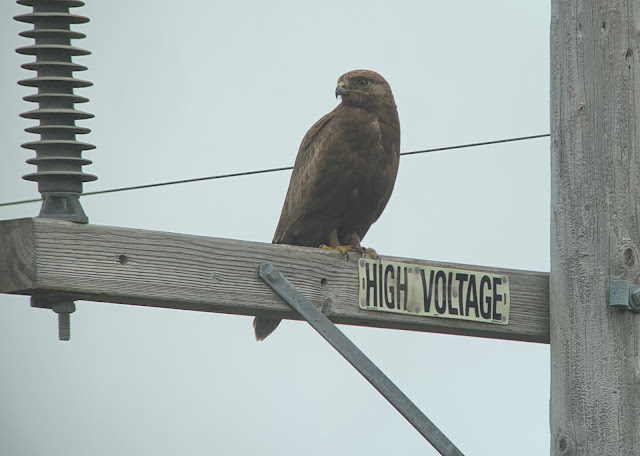 The hawk handled, I set to seawatching for Black-legged Kittiwake, a species I've missed despite making several late-February- and early-March-trips to Half Moon Bay for it over the last three years. Malia Defelice and Chris Hayward joined my vigil, and we chatted while scanning a relatively quiet ocean against gathering winds. Scanning the horizon, I nearly soiled myself when I spotted an albatross, the bird banking to reveal the light underwings with wide, smudgy wing margins indicative of Laysan. Chris and Malia got onto the bird, and we enjoyed distant but diagnostic views as the bird soared out of view. I've seen loads of Black-footed and quite a few Laysans on pelagics, but this was my first albatross from shore. It was Bay Area bike bird #305 and San Mateo bike bird #270. Though kittiwake didn't show at Pigeon, there was one resting in Pescadero Marsh on my return ride - kismet! 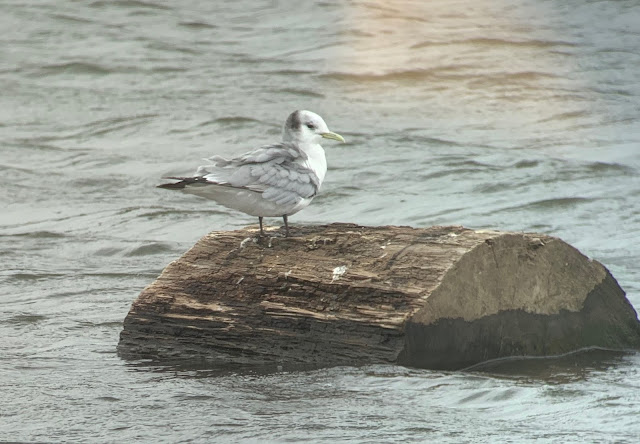 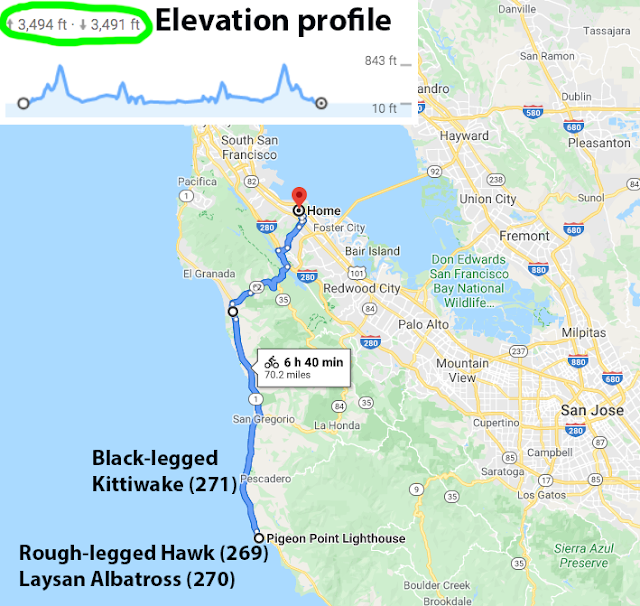 Santa Cruz County
Santa Cruz County has been on my radar for a while but presents significant access challenges; it's ~43 riding miles to the nearest point of coastal access or ~32 miles (plus a huge climb) to the nearest point of interior access (right map). Either round-trip ride doesn't leave much time or energy for birding, so I back-burnered Santa Cruz plans until some recent Santa Clara bike-birding business brought me within striking distance on January 19th. The way the county lines fall (black lines, left map), I needed to go very far south for Santa Clara access to Varied Thrush and Red-breasted Nuthatch at Monte Bello OSP (VATH, RBNU on left map). Given the northern reaches of Santa Cruz County are only 8 miles beyond Monte Bello, I decided to extend my Santa Clara efforts to include Santa Cruz. I could only allow 90 minutes in relatively specialized ridge/redwood habitat, but I tallied 26 species, Red Crossbill and Ring-necked Duck among them. I'm hoping to reach the coastal side of the county as days lengthen, so stay tuned for that. 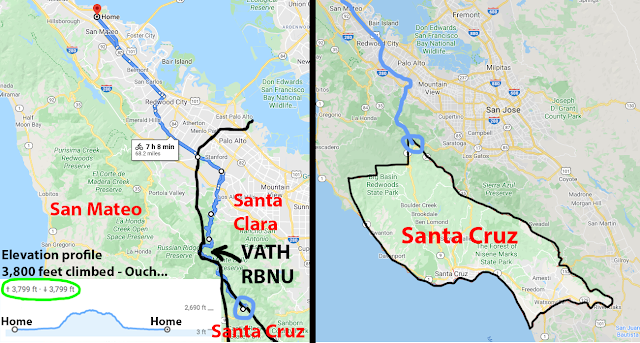 Santa Clara County
As referenced in the Santa Cruz section above, Monte Bello OSP yielded Varied Thrush and Red-breasted Nuthatch for Santa Clara bike-birds #187 and #188. It was a haul to reach that elevated point, so I'm not sure when I'll be attempting that ride again. More easily accessed is Pearson-Arastradero Preserve, a great oak-savannah habitat and possibly my favorite Santa Clara birding spot. Pearson is an easy 20-mile ride from my apartment, loaded with birds, and usually devoid of people. My February 7th visit yielded Common Merganser and Ferruginous Hawk, Santa Clara bike-birds #189 and #190. Both were too far for decent photos, even with the scope. 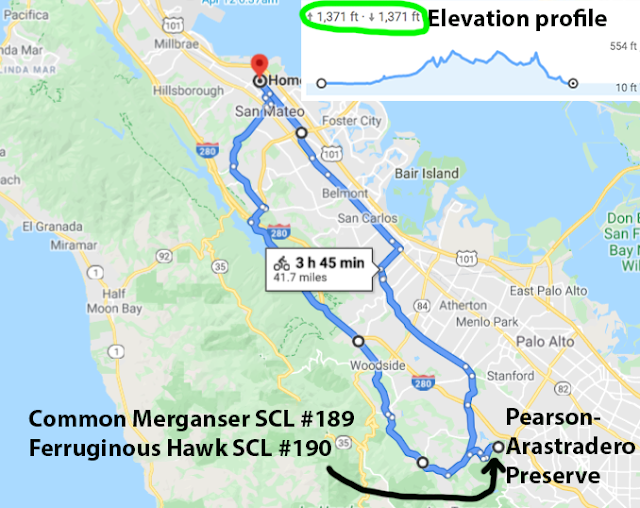 San Francisco County
I've made several trips to SF so far in 2020. Two of those were explicitly motivated by the Golden Gate Park Red-naped Sapsucker - a tricky bird which didn't show on either day I visited - but I still found a nice collection of stuff for my SF bike list on each trip. Rather than offer lengthy recounts of each of those rides, I'll offer maps for context. Currently at 199 SF bike-birds, I hope to reach 200 sometime soon, lockdown permitting. Species in red are those for which I looked but ultimately missed. 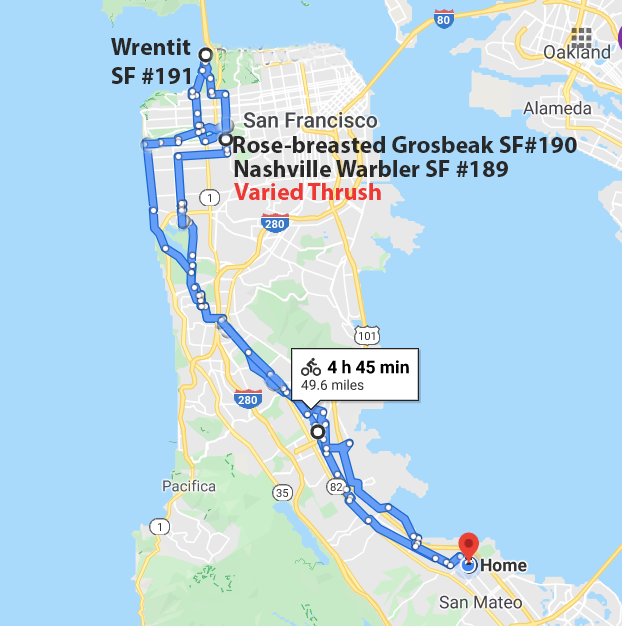 January 31st, my first miss on the sapsucker 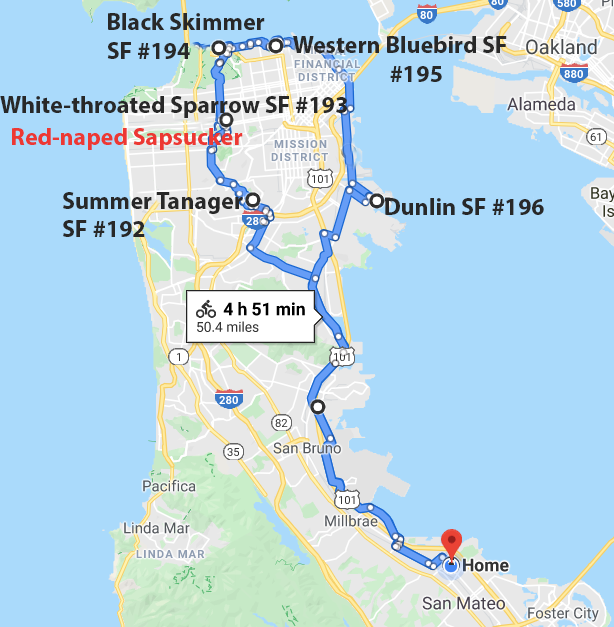 February 21st, my second miss on the sapsucker 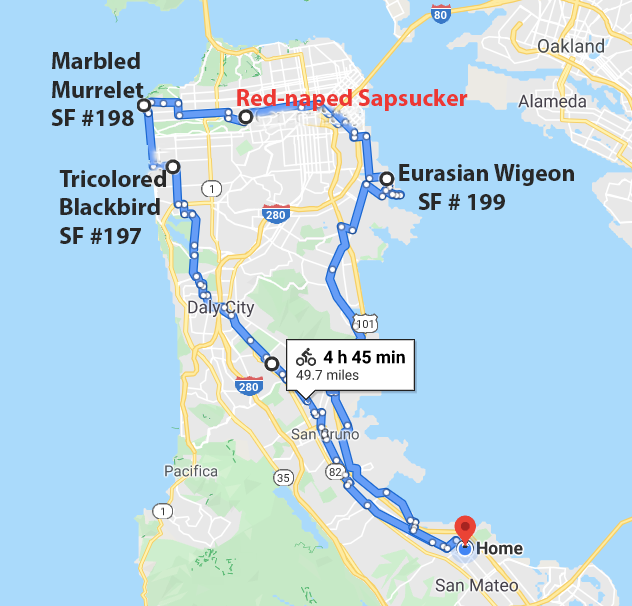 Alameda County
I'd only biked to Alameda four times before visiting for the fifth time earlier this month, so there was a lot of low-hanging county-bird fruit on that visit. Exploring Dry Creek Regional Park for the first time, a two-and-a-half hour walk yielded 11 Alameda birds including Sharp-shinned Hawk, Hairy Woodpecker, Warbling Vireo, Oak Titmouse, and Pine Siskin. Coupled with Blue-winged Teal, Canvasback, Northern Rough-winged Swallow, and Lincoln's Sparrow added at Coyote Hills on my ride home, my 60-mile ride netted me 15 county birds to raise my cumulative total to 151. I'm hoping to return during spring migration, so that will be another nice bump if that happens. Again, lockdown permitting. 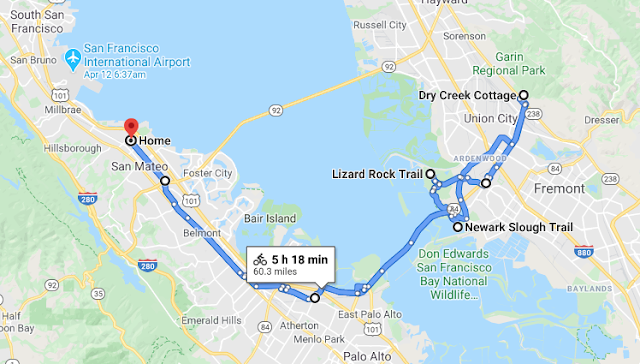 So yeah, lots of maps representing lots of miles! I'm not sure what the virus is going to dictate in the next few weeks, but I'll be out for one long ride each week as long as conditions and rules allow. Stay healthy these next few weeks.
Posted by Dorian Anderson at 8:47 PM No comments:

When John Patten Moss (aka JP) called me last fall to discuss his idea for a unicycle Big Year, I thought he was smoking crack. I pleaded with him to abandon the naive dream, repeatedly emphasizing his twenties should be reserved for child rearing and corporate ascendance, but I was unable to dent his cycling aspiration or birding resolve. I explained transcontinental exploration and personal challenge worthless against safer prospects at Initech or similarly reputable employer, and I warned his self-powered aspirations would render him a sad and incidental footnote in the Big Year landscape. Fortunately, he didn't listen to anything I advised, and we shared an extended bout of cycle-birding as he passed through the Bay Area this weekend. 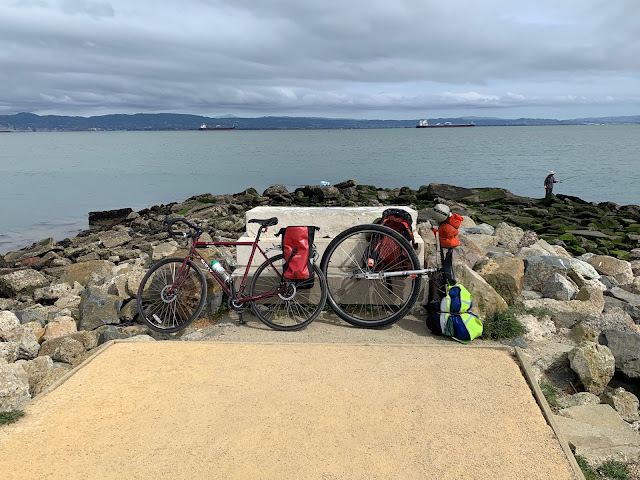 JP departed Olympia, Washington on January 1st, followed the Pacific Coast south, and claimed 174 species by his Golden Gate crossing on Friday, March 6th (follow his progress on his blog). We rendezvoused at Heron's Head Park that afternoon and swapped stories as we searched for the long-staying Rock Sandpiper, the cooperative bird appearing at our feet after a ten-minute search. The 'must-have' ticked, we rolled south toward my San Mateo apartment for the night. 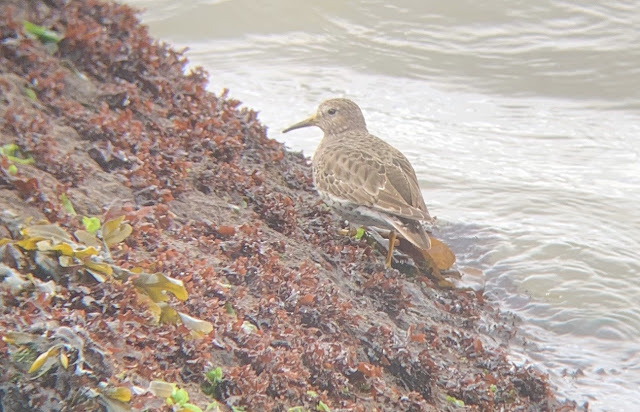 I was surprised how well JP handled the few short hills between Heron's Head and my place, his unicycle's lack of gears the biggest variable when we discussed his plans last fall. Until I rode with him, I didn't appreciate how well his huge, 36-inch wheel rolled or how he could leverage his single-point of road contact to lean into hills in ways my bicycle prevented. He conceded he need to walk up steep sections, but I understood how he survived the ups and downs of the Oregon and California Coast after riding with him. While his unicycle managed uphills better than I imagined, he didn't reap nearly the downhill momentum as my bicycle did. However, the most difficult aspect of the production is mounting the huge wheel, and I see why JP hates stopping at red lights on his unicycle even more than I do on my bicycle. Check out the following video!

The morning of Saturday, March 7th was rainy, so we used those AM hours to bird Coyote Point Park behind my apartment. Among birds we added to his list - Sora, Nuttall's Woodpecker, Lesser Goldfinch, others - Iceland (Thayer's) Gull was notable; JP had no experience with the species/subspecies, so it was nice we could ID that sometimes-tricky bird together.

We used the afternoon to bird the bayshore and look for the Tufted Duck at Nob Hill Pond in Redwood Shores. I'd seen the now-annual bird on low tides in years past, but it was nowhere to be found on the Saturday afternoon ebb (-1 foot). Cross-referencing positive eBird reports from the last month with tide tables that evening, I discovered the bird preferred higher tides (+4 to +5 feet). Armed with that trend, we returned to the pond for the flow on Sunday morning. The bird absent again, we birded the bayshore while the tide continued to rise, a surprise Short-eared Owl a great bonus for our efforts. We returned to the pond an hour later, scanned through many recently-arrived scaup, and found the sought Tufted slightly removed from that accompaniment.

JP's Digi-scoped (my scope, he's not carrying one) Short-eared Owl 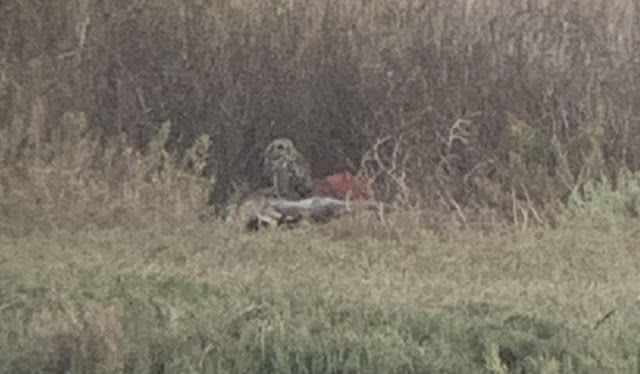 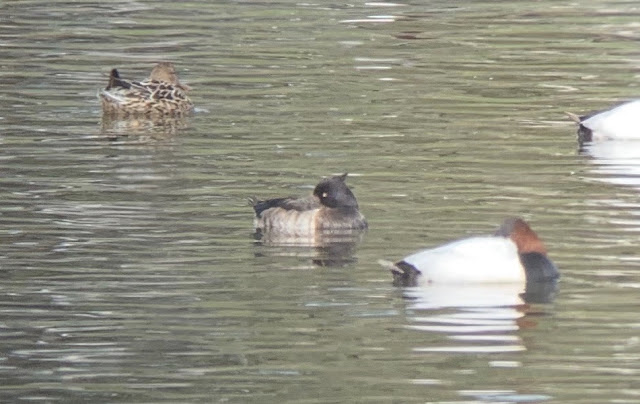 The sandpiper and duck handled, we used Sunday afternoon to find several vocal Ridgway's Rails at the Palo Alto Baylands. JP could have pursued that species at the Salton Sea or outside Yuma, but it was easy to handle while he was in the Bay Area. We went our separate ways at 3pm, but we've stayed in close contact through the last few days. I imagine that trend will continue through the year as I know a few things about navigating the country under my own power.

Me and JP on SF Bay 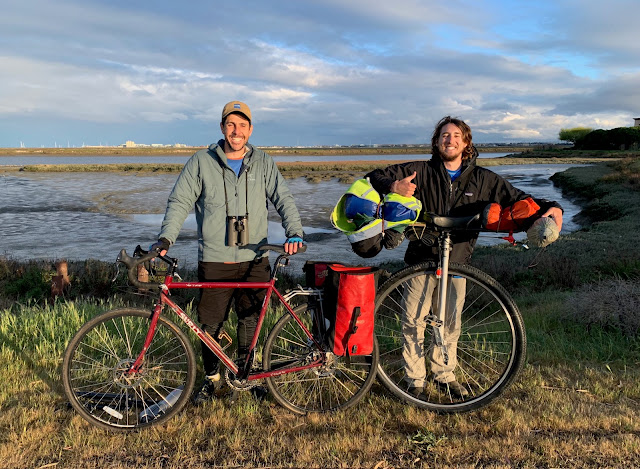 Riding and interacting with JP was a blast, and I hope other birders lend encouragement, bird-finding advice, and lodging as he extends is one-wheeled adventure. JP has a wonderful appreciation of the natural world, a knowledge extending well-beyond birds, and an engaging personality. He's going to have a really sweet story at the end of this year, so hopefully some of you will find a way to be a part of it!

Below is his rough route for the next few weeks. He's in Hollister now and will be going to Pinnacles before following the 101 corridor south to Paso Robles and onto San Luis Obispo. From there he'll follow the coast all the way into Pasadena. If you live anywhere near the indicated blue trace -- San Lucas, San Ardo, Bradley, Templeton, Atascadero, SLO, Pismo Beach, Santa Maria, Lompoc, Santa Barbara, Ventura, Camarillo, Simi Valley, and Pasadena, etc -- and would be willing to house and feed JP, please email him at mossbill16@yahoo.com. Lodging on the CA coast is HELLA expensive, and it would be a huge financial help if the community would step up to keep costs down!

JP's rough route for the next two weeks or so.
His goal is to be in Pasadena on April 1st (no joke). 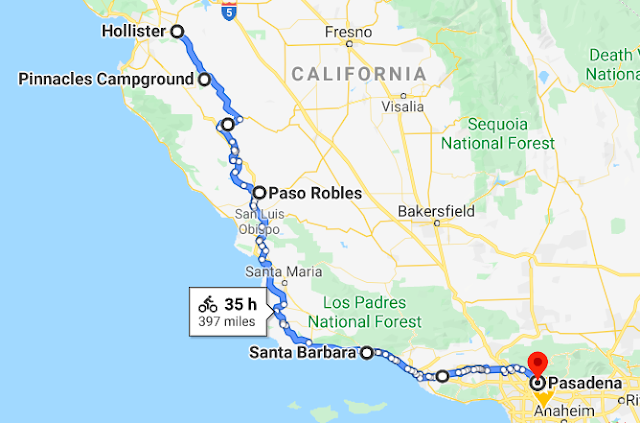 That's it for now, cheers!
Posted by Dorian Anderson at 4:26 PM 1 comment: