I've dispensed a lot of bike-birding content recently, so I'm just going to throw up a bunch of photos and say a few a words about each. It's been really, really hard with my local shorebird spot shut down for the two years starting in January, but I've squeezed out a few keeper frames from other places. I'm hoping to get out a bit more now that the days are longer and sunnier!
Surf Scoters are usually far from shore, but I was able to float right up onto this male in my inflatable kayak. Since depth of field compresses at such close range, I closed the the lens down to f/8 (from f/5.6) to make sure I preserved focus across the face and neck. These high-contrast subjects are a real challenge in bright sunlight. It's easy to overexposure the whites or underexpose the blacks, so I was stoked to preserve feather detail at those extremes. I think he looks like an alien with that multicolored beak and white eye!
Surf Scoter - Melanitta perspicillata
Canon 600mm f/4 IS II + 1.4x III on EOS 1DX Mark II
1/2500 at f/8, ISO 800 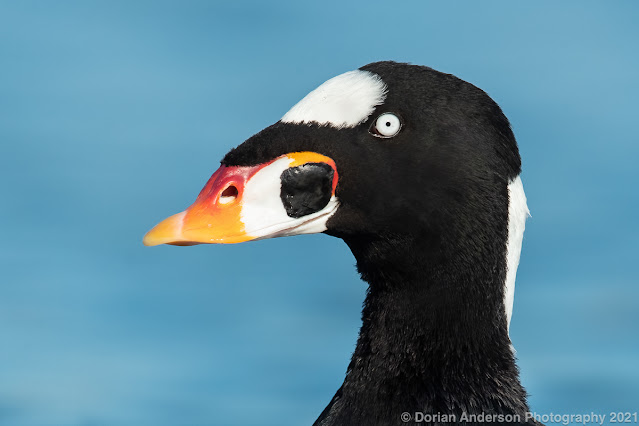 Incredibly, this Bushtit frame happened without the aid of audio or food. How'd I get the bird onto such a sweet perch without crap in the background? Well, I saw a family group of ~20 picking its way through a low hedgerow. There was a break at the end where the birds would emerge, so I ran ahead of them and waited. My plan worked to perfection, and I had a quick opportunity at this bird before it flitted across the opening and disappeared into another shrub. I see this species around my San Mateo apartment almost every day, but this is the first decent photo I've managed of this tiny and highly-kinetic bird. For perspective, the bird's body is about the size of a golfball. So yeah, a hella small target!
Bushtit - Psaltriparus minimus
Canon 600mm f/4 IS II + 1.4x III on EOS 1DX Mark II
1/2500 at f/5.6, ISO 800 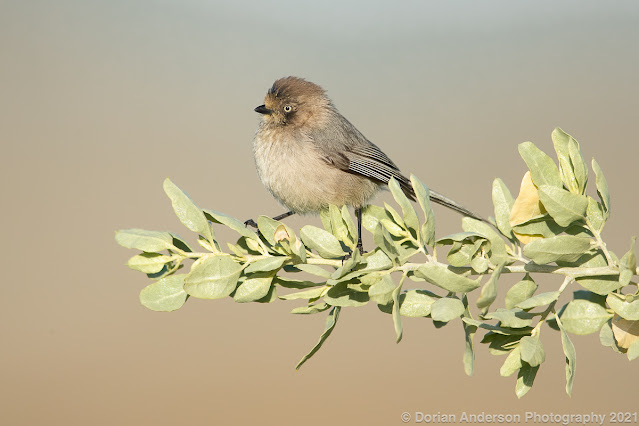 I have lots of shots of the Ring-neck Ducks which winter in Golden Gate Park, but I love the consistent, low angle opportunity they offer. The birds patrol Stowe Lake while looking for handouts, so it's as simple as staking out a water-level vantage, laying prone on my stomach, and waiting. That's easier said that done while holding my heavy camera, but my patience paid off when this guy cruised by at the perfect distance. You can't beat water-level bokeh/blur!
Ring-necked Duck - Aythya collaris
Canon 600mm f/4 IS on EOS 1DX Mark II
1/3200 at f/5.6, ISO 640 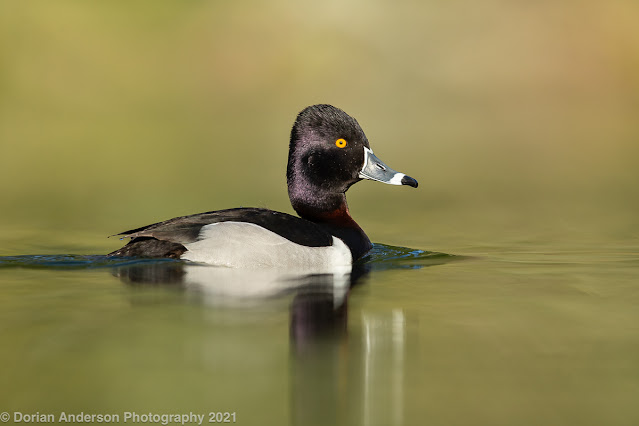 Last, a bit of a cheap shot. I was in a blind while leading a photo workshop in Texas in January, and food and water were used to lure a variety of local birds to an array of perfect perches (this happened at a private ranch which specializes in this sort of 'set-up' photography). It's kinda cheesy since it requires zero behavioral knowledge or stalking skill, but it's a great way to reinforce technique with clients. I much prefer shooting in the field - where shots have to be earned - but it's tough to argue with results like this, particularly when the subject is as stealthy as the Long-billed Thrasher! 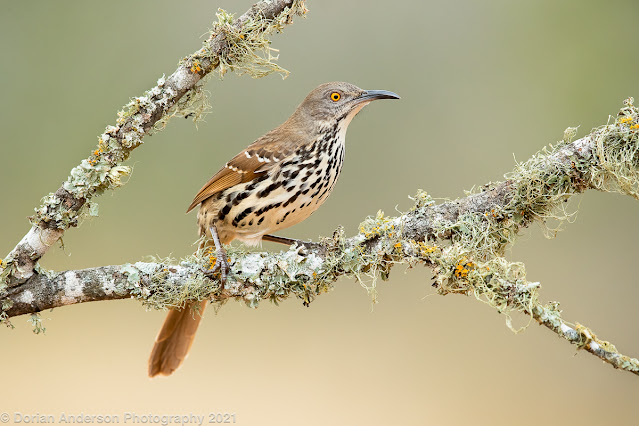 That's it for now. Headed out with the camera tomorrow, so hopefully I'll have more for you in the next installment.
Posted by Dorian Anderson at 9:28 PM 2 comments:

More of the same around here at the moment! I've been venturing farther afield since birding my local Coyote Point Park is so depressing right now; a big chunk of the park is ripped up for levy improvements. It's incredibly frustrating on top of the Foster City closure (2 damn years!). It seems the entire San Mateo bayshore is under construction. Why can't they do one place at a time, do it fast, then move to the next? So dumb. Anyway, let's get into my recent adventures.

California Thrasher (CATH), San Francisco, March 4th
Common in my home San Mateo County where its preferred chaparral is more widespread, CATH is quite rare in the more developed confines of San Francisco to the north; eBird suggests it ~annual with 4-5 records spread across the last 4-5 years. A couple stuck around for a while in 2018, but I wasn't invested in those sightings because I'd seen the bird in San Mateo and hadn't starting listing for the other, individual counties at that juncture. Wondering if I'd get another crack at CATH in SF, I was happy to learn about one at Candlestick Point at the end of February. I couldn't make time for a pursuit until March 4th, shocking as the bird was less 15 miles from my apartment (an hour's ride), but I was happy to find it kicking around the same area it had spent the previous week. I forwent the scope in favor of the DSLR on this occasion, that decision validated when the bird allowed close approach! 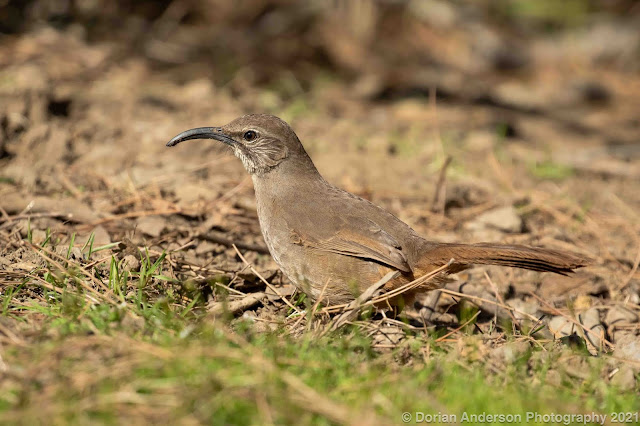 Mileage is for the round trip 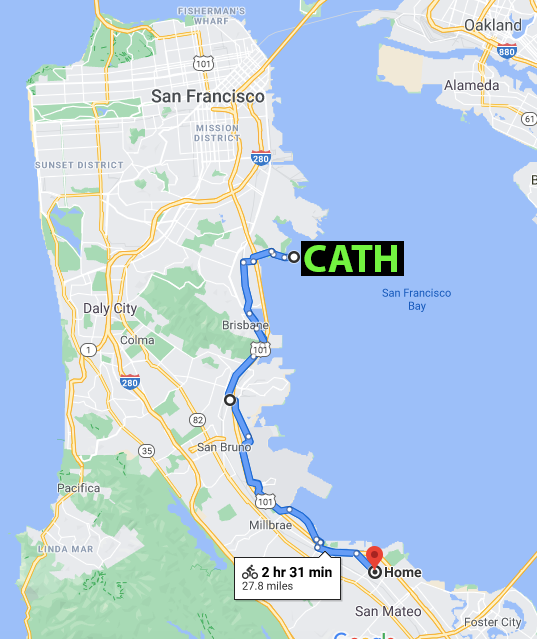 Common Poorwill (COPO), San Mateo, March 11th
Nocturnal birds present another level of bike-birding challenge because riding at night comes with additional dangers versus riding during the day. My wife lets me get away with it close to home, but neither of us wants me riding significant distance - like over the coastal mountains - after dark. So, chasing a continuing COPO in Montara required more logistics than usual, specifically an overnight in Half Moon Bay.
I left home at 4pm on Thursday, March 11, did some leisurely birding en route, and reached Montara at 6pm. The bird had been showing on a particular path like clockwork between 6:30 and 6:45, but it was not to be on this this night. It had rained heavily overnight and all morning, so I suspect the weather disrupted the bird's routine. Worse, more rain materialized just as I was leaving. Visibility was reduced to twenty feet, and I had no choice but to push south along Highway 1 until I found temporary shelter. That came in the form of a gas station where I spent fifteen minutes before continuing to south the Half Moon Bay under lighter drizzle. I was drenched from head to toe. It sucked. I made it home the next morning without trouble, but I really should have waited for the weather to stabilize before I invested the time. Overall, it was a big bummer as COPO would have been new for my cumulative Bay Area bike list. I might make another attempt if the bird sticks around, so stay tuned for that.

Shelter from the downpour - see street behind! 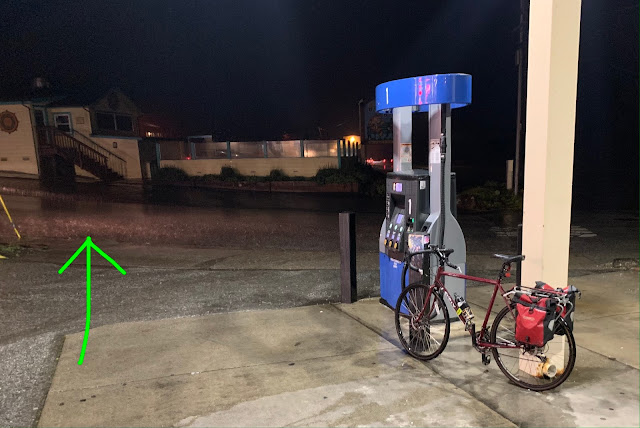 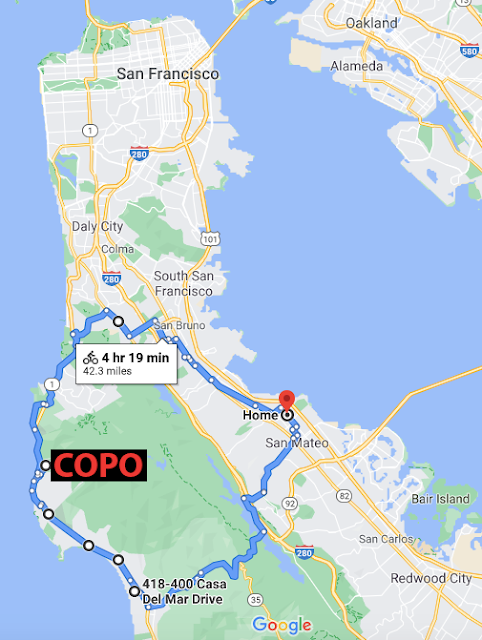 Lesser Black-backed Gull (LBBG), Santa Clara, March 14th
This another bird which slipped through my radar with at least 3 individuals kicking around Alviso in the South Bay for the previous few days. That's a tough destination for me to reach on the bike because prevailing NW winds make the return ride a huge pain in the ass, but Sunday offered unusual opportunity on two fronts. First, the start of daylight savings guaranteed the roads empty at sunrise, a circumstance which would let me run every light and stop sign on the outgoing leg; second, south winds ahead of an approaching storm meant I'd have a rare tailwind on my return (rain in the Bay Area is almost always accompanied by southwest winds).

I left at first light and hauled ass south. Making tracks through Palo Alto, I glimpsed four geese flying towards me as I zipped by the Renzel Wetlands. Three were standard Canadas, but the final was a comparatively-tiny Cackling Goose (CACG). That species had eluded me in Santa Clara as far as the bike was concerned, so it was a nice bonus en route to Alviso. Santa Clara bike bird #223 - woo hoo!

Reaching that destination 1 hour 52 minutes after I left home, I bumped into Santa Clara stalwarts Matthew Dodder and Bob Reiling who said they had the 1st cycle LBBG ten minutes before I arrived. The three of us were unable to relocated the bird, but it flew in for me 90 minutes later. A quick digiscope snapped - light head, dark body, black bill, long wings, slender appearance - it was time to head home ahead of approaching rain. I bombed up the bayshore, but traffic lights crushed me once I rejoined the sprawl; I had to stop more times that I cared to count. Regardless, the return ride took 1 hour 56 minutes, a solid 45 minutes faster than when I need to ride into NW winds to get home.
1st cycle Lesser Black-backed Gull
Bay Area bike bird #331. Santa Clara Bike bird #224. 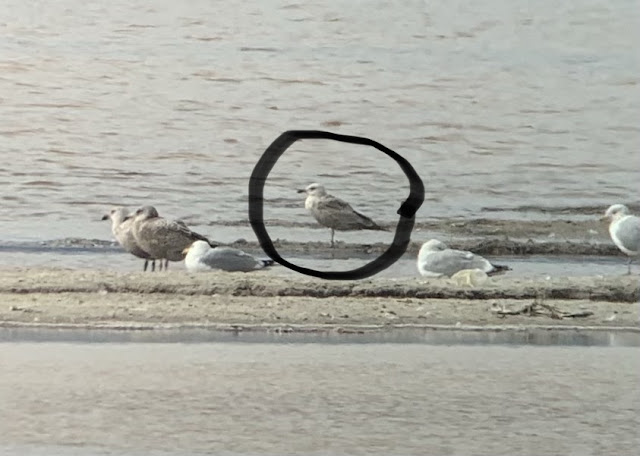 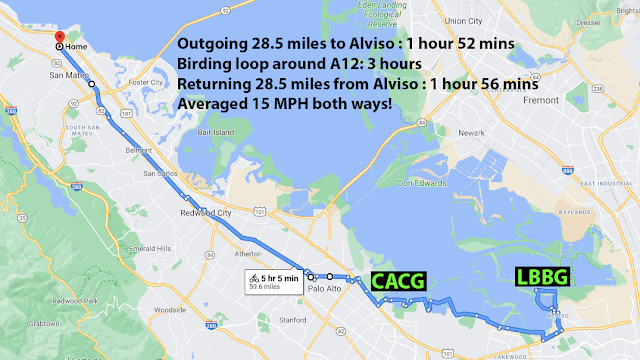 So, two outta three ain't bad. I've been doing a bit more photography lately, so maybe I'll go with an image-driven post the next time around. Cheers!
Posted by Dorian Anderson at 7:25 AM 2 comments: