This is part 2 (of 2) of my recent trip to the Extremadura region of Spain. In the first post (post #96, linked here), I highlighted the history and geography of the region. In this installment I'll focus more specifically on the birdlife. I'll spotlight the specific places that I visited and the birds that I saw at each location. Where appropriate, I have linked my eBird checklists to provide a complete view of observed species. So with that, let's get started.


There is simply no doubt that the crown jewel of Extremadura is Monfragüe National Park. Those from the Eastern United States might gleam some geologic similarity to the rolling, parallel ridges of the Appalachian Mountains. This is because the same plate tectonics that raised the Appalachians formed the Monfragüe ridges. Recall from elementary school the all of earth's landmasses were once aggregated in a supercontinent called Pangea. At that time, the eastern United States were closely juxtaposed to both North Africa and the Iberian Peninsula, regions with which they still share geological similarity despite eons of continental drift between then and now. Wait, what the hell happened to birds? They're coming, I promise!

The view from the top of Monfragüe National Park

An area of the park known as Monfragüe Landscape.
Vultures nest on the shown cliffs in large numbers. 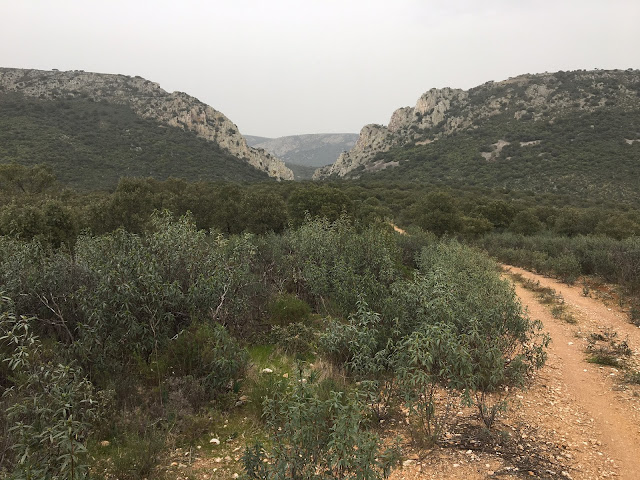 Monfragüe's rocky ridges hold raptors at all seasons but particularly in summer; Hoards of Eurasian Griffons and lesser numbers of Cinereous Vultures and Egyptian Vultures nest in the area. It is worth noting that Old World Vultures are evolutionarily distinct from New World Vultures (Cathartidae). Scavenging evolved independently in the two groups; New World Vulture seek carrion by smell while Old World Vultures do so by sight. From the castle at the top of the national park, it is possible to get eye levels vies of these huge birds as they fly up and down the ridges. A camera is a must at this spot, and my only regret from my trip was that I only had a few hours at Monfragüe. Beyond vultures, Spanish Imperial Eagle and Bonelli's Eagle are resident, and a host of other raptors are reliably found as well. The park's woodlands host a nice variety of tits and finches, and Blue Rock Thrush, Rock Bunting, and Black Stork are usually found in rocky areas. A checklist of a day's birding at Monfragüe can be found here. 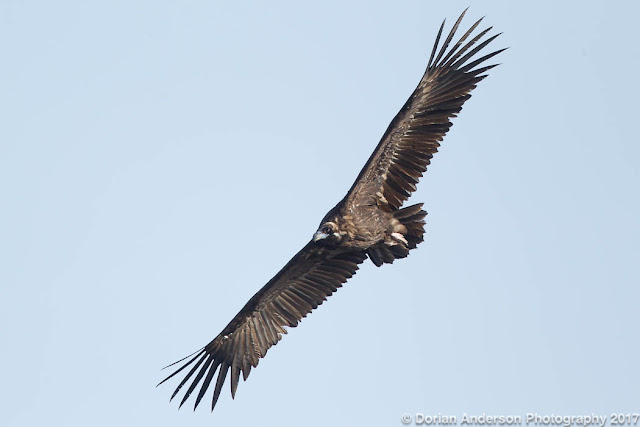 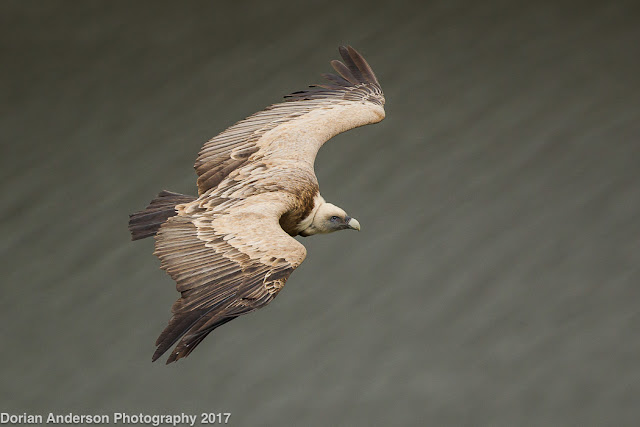 Not far from Monfragüe is the tiny hamlet of Cabañas del Castillo, a town built right into the cliffs that must be seen to be believed. It felt as though I could reach out and grab the Crag Martins as they whizzed past me. My checklist from my visit to Cabañas del Castillo and the surrounding area is here and includes, among others, Short-toed Snake Eagle, Gray Wagtail, Long-tailed Tit, Short-toed Treecreeper, and Eurasian Blackcap.

The view from above Cabañas del Castillo 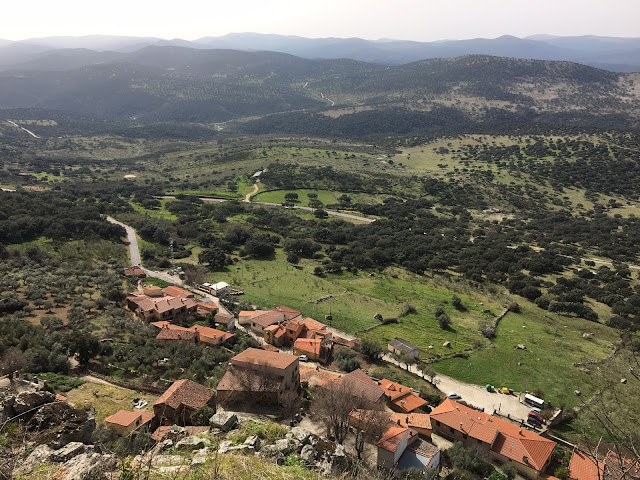 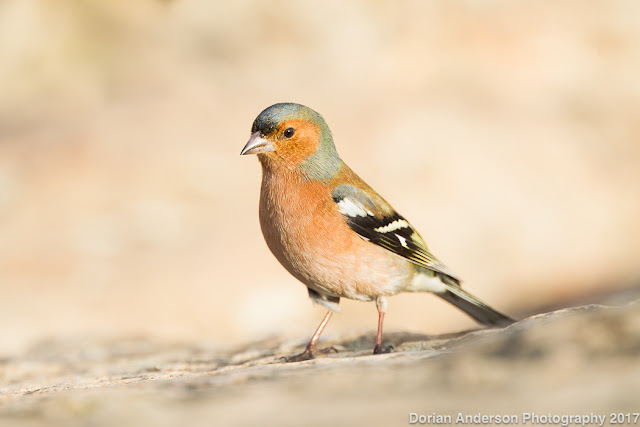 Switching it up from landbirding, the nearby Arrocampo Reservoir is home to all sorts of water birds. The artificial body is actually a heat sink to cool the nuclear reactor at the lake's downstream end. Arrocampo is rather expansive, but it is possible to scan most of it from its perimeter. This is a great spot to find Little Bittern, Western Swamphen, and other waders and shorebirds. Lesser Kestrel, Eurasian Hoopoe, and Southern Gray Shrike were observed in the adjacent farm fields, and White Wagtails, Common Chiffchaffs, and a lone Bluethroat foraged at water's edge. One could easily spend an entire morning or afternoon at Arrocampo and still turn up new species. The birdlist from my visit can be found here. Alcollarín Reservoir was another particularly productive spot for water birds. My visit at that spot was highlighted by Graylag Goose, Common Pochard, Eurasian Wigeon, Tufted Duck, and Cetti's Warbler. My complete checklist for my Alcollarín visit can be found here. 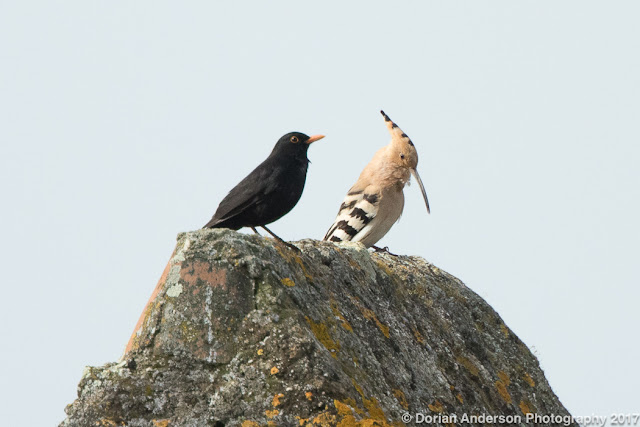 Los Barruecos was my single favorite birding spot. The expansive boulder field is home to a large nesting colony of White Storks, most of which nest directly on top of the rocks. The birds are quite tolerant of humans, and there are a set of easy walking trails that wind through the colony. It is a really unique site, one that I will certainly revisit on my next trip! 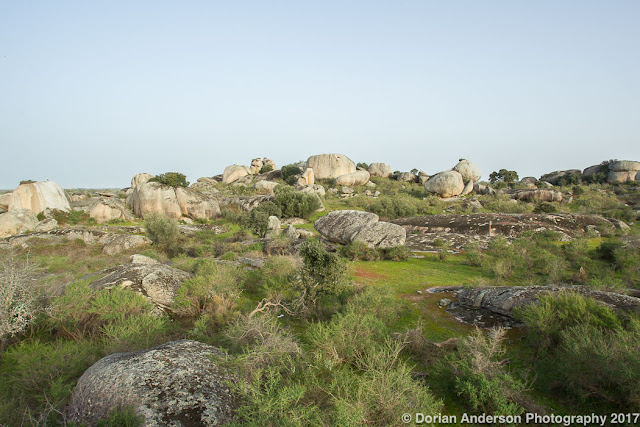 Another view of Los Barruecos boulderfield 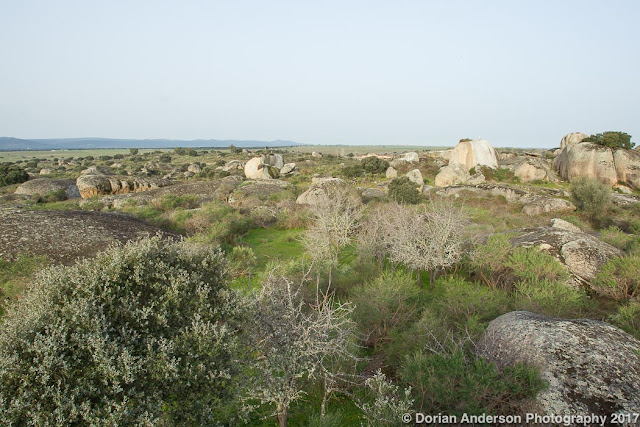 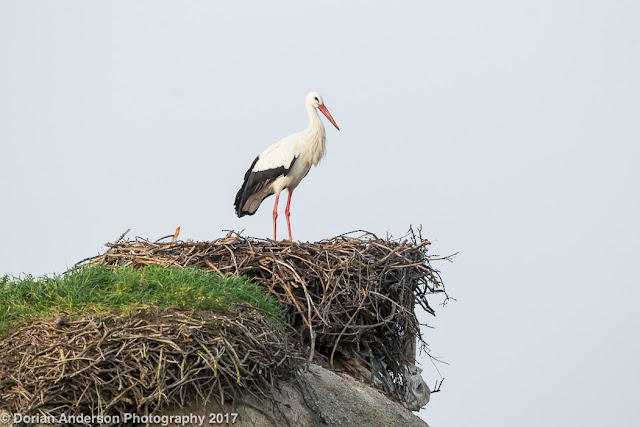 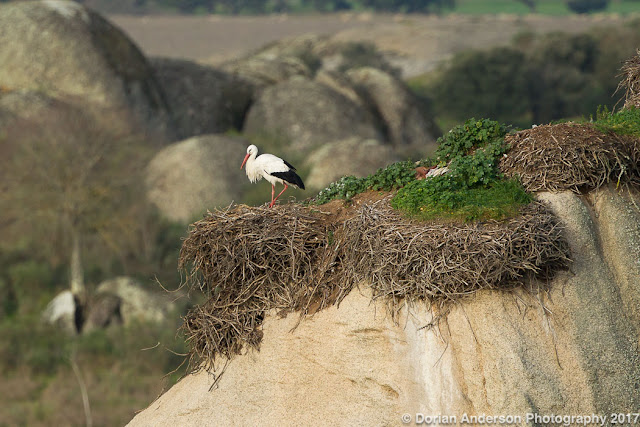 Beyond the storks, Sardinian Warblers, Crested Larks, Eurasian Stonechats, Black Redstarts, Zitting Cisticolas, and Spanish Sparrows were in great abundance at Los Barruecos. A particular highlight were the 2 Red-rumped Swallows that winged past me as I navigated the boulder field. A single Little Owl appeared on a roadside rock wall and made a strong case for bird of the day. Nearby ponds yielded Common Snipe, Common Sandpiper, Common Greenshank, Black-winged Stilt, Eurasian Spoonbill, and Eurasian Marsh Harrier. Checklists from Los Barruecos and surrounds can he found here and here, respectively.

Non-birding activities in the area include the Vostell Museum, an equally strange and interesting tribute to Wolf Vostell, a pioneer in "Happening" and "Fluxus" art (neither of which I get, but who's to judge, right?). This is one of his sculptures outside the museum, a plane crashing into cars filled with television monitors. It's supposed to be some form of commentary on technology and modern life though I didn't glean all that what with the nesting storks on it! 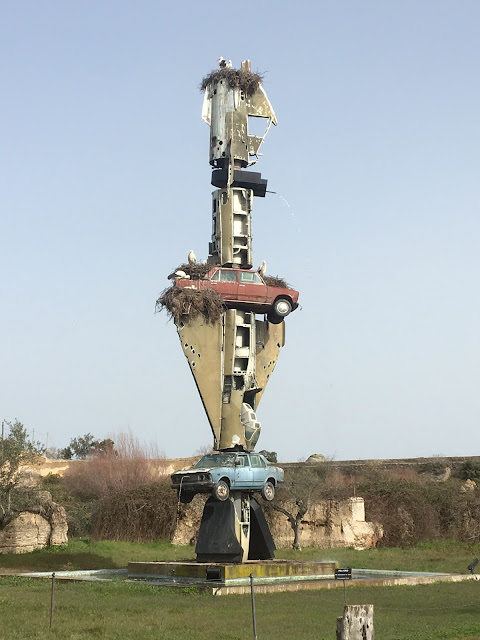 If larks, bustards, and sandgrouse are what you seek, the plains around Cáceres are where you want to be. I made several transects of that habitat, turning up Calandra Lark, Great Bustard, Little Bustard, and Black-bellied Sandgrouse. Pin-tailed Sandgrouse are apparently fairly reliable though we managed to miss those over several afternoons. The bustards in particular were a real treat. Interestingly, Great Bustard is the world's heaviest flying bird, so that adds a bit of trivia to these otherwise incredible birds. Checklists from the plains areas can be found here and here. 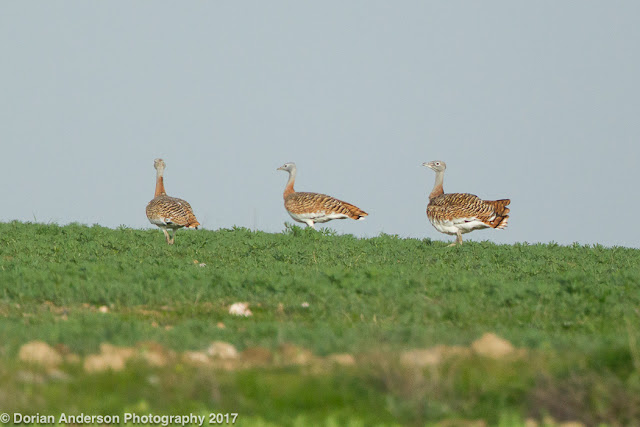 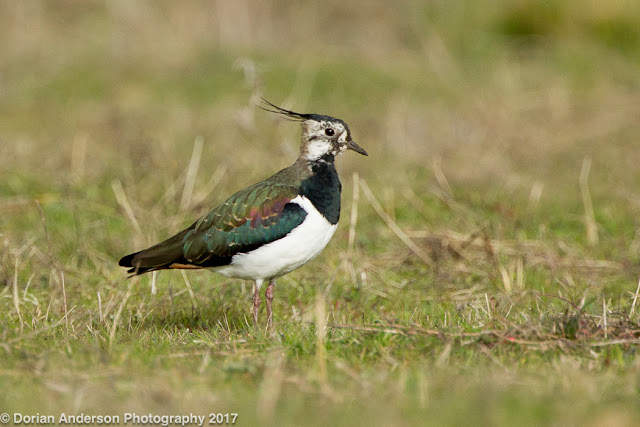 I also spent a bit of time birding in and around the various towns tha I visited. Mérida and Plasencia, in particular, were productive birding. For instance, the only Eurasian Penduline-Tit that I saw on the whole trip was on the Roman Bridge in Mérida. My Mérida checklist is here and my Plasencia checklist is found here. Birds like Black-headed Gull, Lesser Kestrel, Eurasian Jackdaw European Goldfinch, Eurasian Kingfisher and European Serin were as easy to see in towns as anywhere else, so do keep your eyes open for birds when in urban areas. 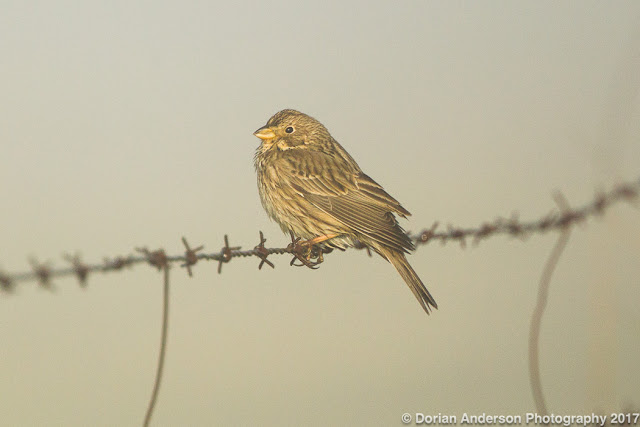 I ultimately ended up with 119 species for 8 days of birding. As I stated in the first Extremadura post, that number is significantly lower than the 175 species one could expect to collect during an April or May visit. If I were visiting from the US, I would aim for later in the spring when more of the Southern European specialties birds (European Bee-eater, Eurasian Roller, etc) have returned from their wintering grounds. 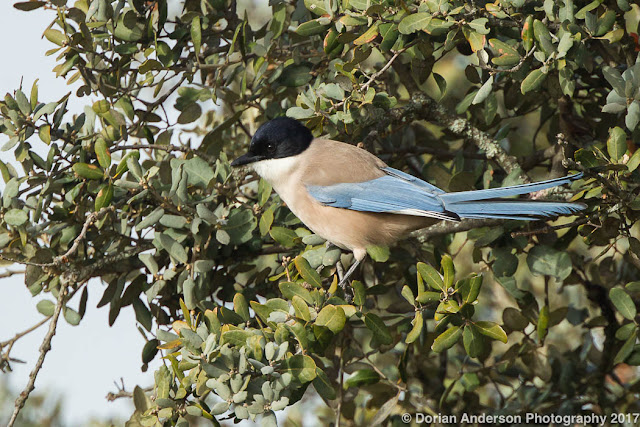 Lastly, it is worth noting that bird photography in Spain is incredibly difficult. This is likely due to the hunting tradition around the Mediterranean, a frustrating history that makes birds in the region super wary of humans and, as a result, painfully unapproachable. I generally found that it wasn't worth carrying my camera in the field, save for record shots. If faced with space constraints when packing and you've got to chose between the camera and the scope, take the scope, hands down.

Though collecting quality photographs while birding (i.e. in the field) isn't likely to be successful, there is a set of professional level blinds, or "hides", around Extremadura to assist photographers towards this goal. These managed entities will place photographers close enough to subjects so that they can obtain the desired results. Do expect to pay significantly for this privilege; A full day in a hide can run upwards of 150 to 200 Euros. Photography in Spain can be great, just expect to pay for it (unlike, say, Florida).

Despite these relatively minor photographic caveats, Extremadura is nonetheless a fantastic destination for both birders and more general tourists alike. The balance of birding, culture, and history is fantastic, and a generally pleasant climate, particularly in spring, makes the Extremadura experience one that everyone should have at some point. It would be easy to couple 5 days in Extremadura to a few days further south - around Seville and Doñana National Park  - to round a nice tour of Southern Spain. Alternatively, a fall visit to Extremadura might blend well with some time hawkwatching at Tarifa.

Additional information (including information on birding guides) can be found at the official Extremadura Birding site.

If you like this content, PLEASE consider signing up to 'follow' this blog. All it takes is your email address, and you'll get updates whenever new posts are released (about once/week, that's it). This will help me understand my readership and display its collective weight. You can sign up to follow at the right hand side of the blog, just below the 'archives' section. Thanks to those who have done this already, and I look forward to more of you joining us in the future!

Whew - that was a lot! Now I've to got crank out similar reports for Belize and Guatemala, so stay tuned for those in upcoming weeks! 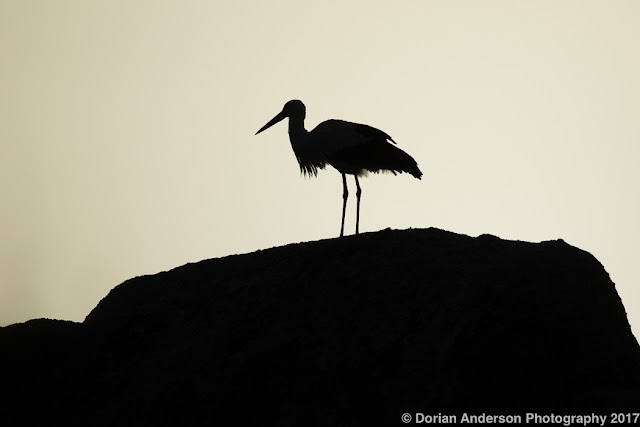 Posted by Dorian Anderson at 12:02 PM