So, my Spain adventure ended on February 28, and I flew back to the states that day. I got home at midnight, and the following morning drove to SF where Sonia and I spent 5 days apartment hunting (we found a great place in San Mateo). I returned to LA for 2 days, then headed south to Belize and Guatemala for another 10-day birding/ecotourism press trip. The visit was a whirlwind tour designed to give us a flavor of what the two countries had to offer. I was incredibly impressed with both places, and the next 5 posts will reveal all that I experienced on my inaugural visit to both places. These posts are detailed enough that a person could fairly easily put together an really nice itinerary from the information I provide. OK, let's get going!

The opening, Belize portion of the trip was just 3 full days in length (an afternoon, 2 full days, and a morning), and I'll condense my account of them into this single, rather long post. I'll take you through each of my days so that you can get a good idea of what a birder might accomplish in Belize in just a few days. I didn't have much of an idea what to expect before my departure, but I can now say unequivocally that Belize should be right at the top of any traveling birder's wish list. My visit was very brief, so this account is by no means all-encompassing. It should, however, give you a nice introduction to what to expect on your (hopefully) upcoming visit!

From the Central American map above, it's clear that Belize is very small. At 8,867 square miles, it's only ~10% larger than El Salvador, Central America's smallest country. Interestingly, we hear a lot about the bird species density of Costa Rica; With 910 species packed into 19,730 square miles, Costa Rica's avian density is certainly impressive. However, with ~590 bird species in its 8,867 square miles, Belize's bird species density is actually higher! The metric is a bit misleading as it favors smaller geographies, but it's nonetheless easy to see that Belize packs tremendous birdlife into a small package. 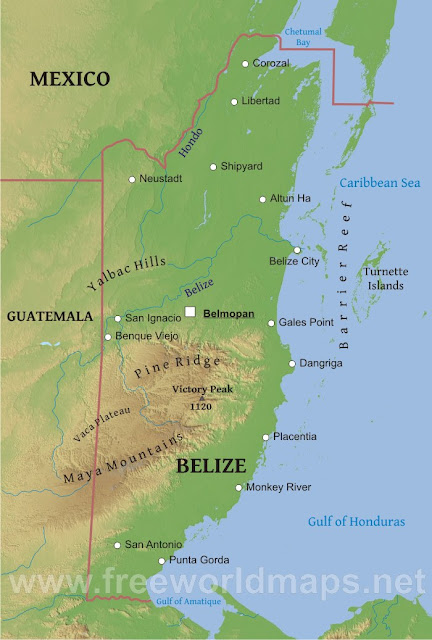 When speaking about birding in Central America, Costa Rica is clearly the established reference point. I have visited Costa Rica once before, and the thing that immediately struck me about Belize is how comparatively underdeveloped (in a good way) it is. Belize has just 374,000 people in the entire country, making it - by an order of magnitude - the least populated country in Central America (Panama is next with 4 million, then Costa Rica with 5 million). Correcting for area, Belize has a population density 1/6 of that of Costa Rica. This means - first - that there is a lot of undisturbed habitat in Belize, and, second, that the country feels a bit more rustic, a bit less polished than Costa Rica. Stated another way, Belize is that great new restaurant that has yet to be fully discovered. It's still possible to get a table and a great meal at a reasonable price. The hype has far from out run the product, and those that visit Belize sooner (rather than later!) will be the trend setters versus the trend followers.

Day 1 was a wash from a birding standpoint as it consisted of an afternoon arrival and evening welcome reception for our group. I did meet many fine folks from the Belize Audubon Society, an entity that both promotes conservation and manages reserves within the country. After dinner we headed an hour north from Belize City to reach the Bird's Eye Lodge at Crooked Tree Wildlife Sanctuary. It was pitch black when we arrived, but a night outing yielded underwear-soiling views of Yucatán Nightjar, a reclusive species generally restricted to that geography.


Yucatan Nightjar - Antrostomus badius
Canon 400mm f/4 IS DO II on EOS 1D Mark IV
1/300 at f/5.6, ISO 1600, handheld
Flash with 580EX II and Better Beamer
More like this on my Instagram account!
You are going to want to click on the
images for higher resolution views! 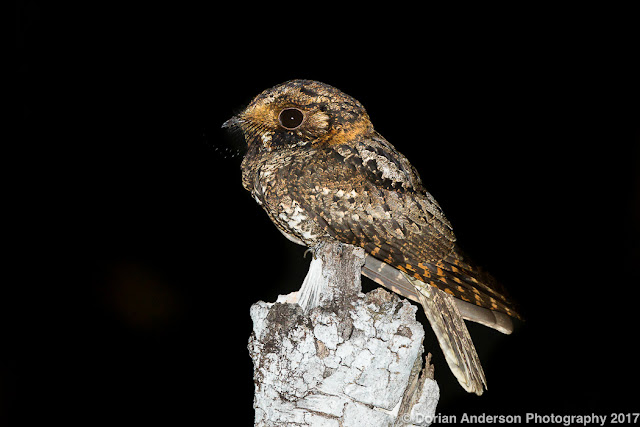 Same settings as above 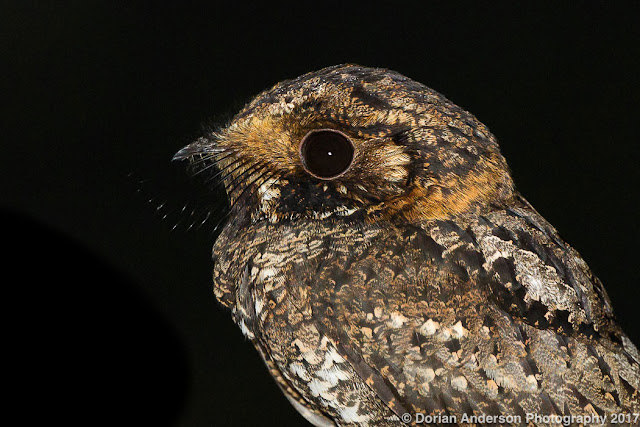 We spent the morning of Day 2 birding Crooked Tree, and it was FANTASTIC!!! My eBird checklist from that morning has 106 species on it, including Jabiru, Bare-throated Tiger-Heron, Boat-billed Heron, Russet-naped Wood-rail, American Pygmy Kingfisher, Yucatán Woodpecker, Yellow-headed Parrot, Laughing Falcon, Rufous-breasted Spinetail, Yucatán Flycatcher, Swainson's Warbler, Black-cowled Oriole, and Yellow-billed Cacique. The highlight of the morning was certainly the boat ride through the sanctuary. There were hundreds of waders and dozens of kingfishers. At one point, I had 5 Snail Kites in my binocular field! The bird of the morning was an Agami Heron as it picked it characteristic way through tangled roots overhanging the water's edge. I was so mesmerized by the bird's beauty that I forgot to get a photo (would had a lot of roots in the way, anyway!) 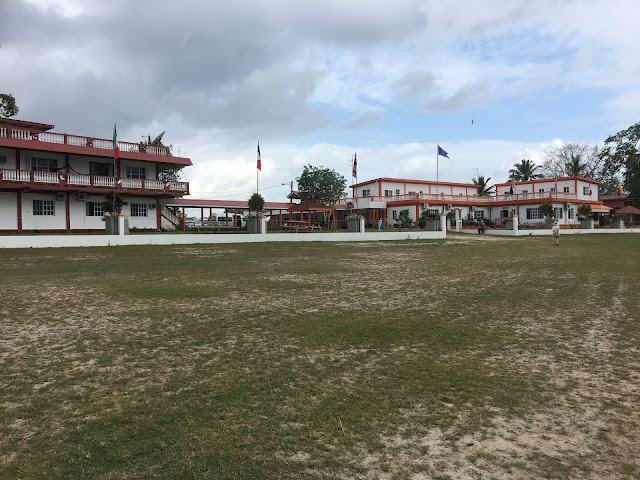 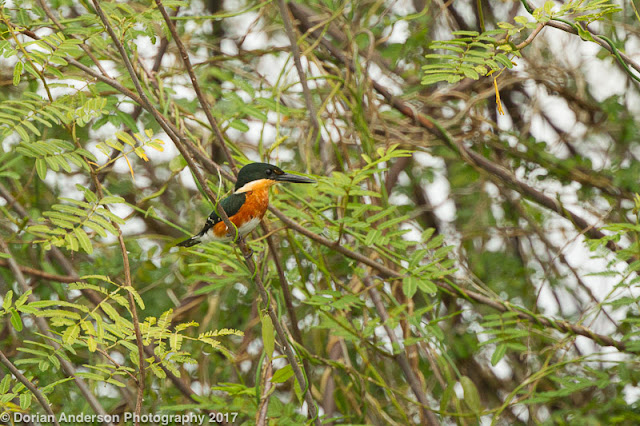 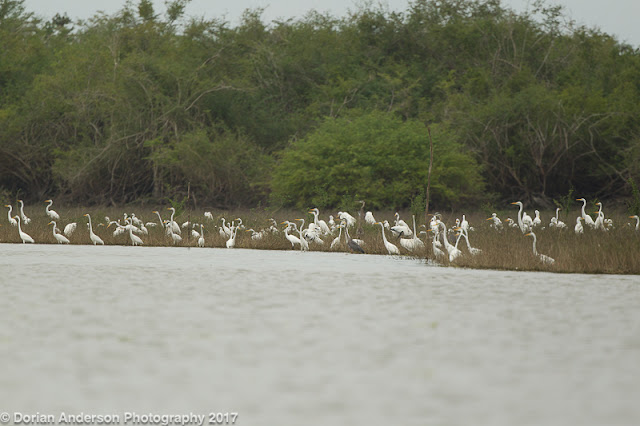 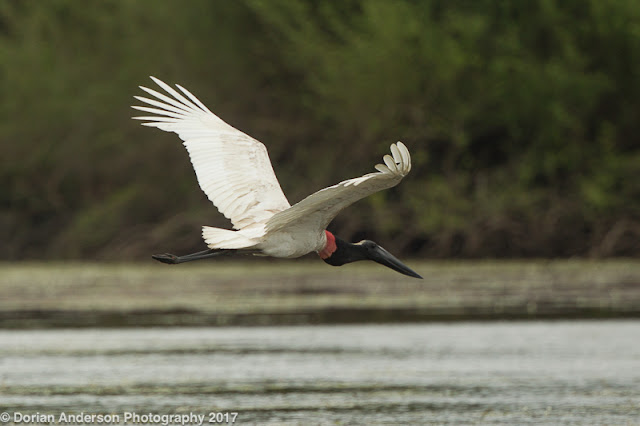 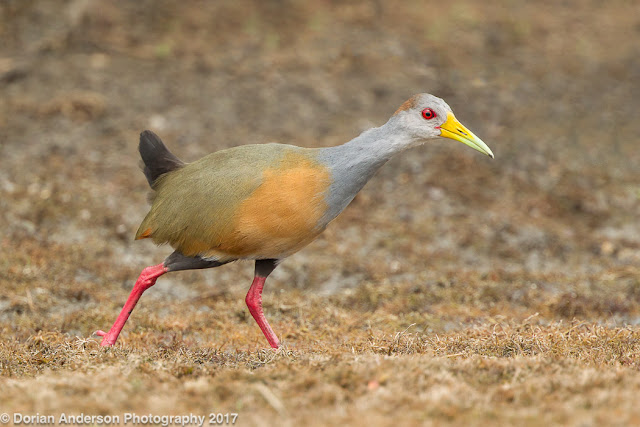 In my opinion, it would be completely possible to spend 3 full days at Crooked Tree, particularly if photography is a priority. The lake runs north-south and as such the western and eastern shores should be perfectly lit in the morning and afternoon, respectively. A person could do some real photographic damage with a kayak at Crooked Tree!

After our amazing morning at Crooked Tree, we headed south along the Hummingbird Highway towards Blue Hole National Park. An afternoon arrival left us a bit of time for birding at the park. Double-Toothed Kite, Passerini's Tanager, White-whiskered Puffbird, and Barred Antshrike highlighted an eBird checklist that can be found here. We spent night 2 at the very nice Jaguar Creek. We had planned to return to Blue Hole on the morning of Day 3, but heavy rains washed out that plan. We instead detoured to the coast and Gra Gra Lagoon where we padded our trip list with a variety of shorebirds (eBird checklist here). Mangrove Cuckoo was a very welcome surprise at that stop! 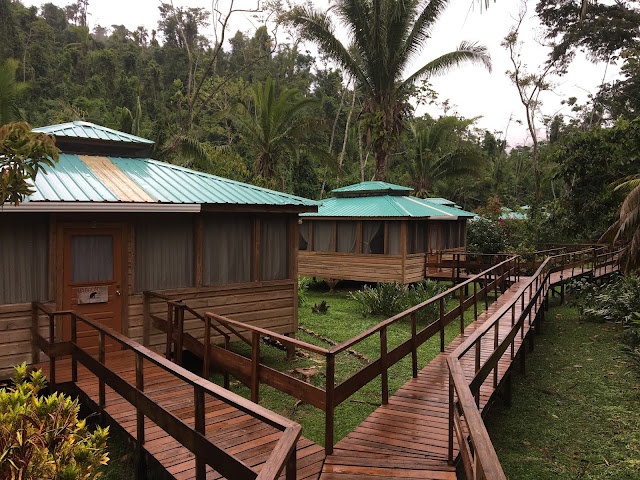 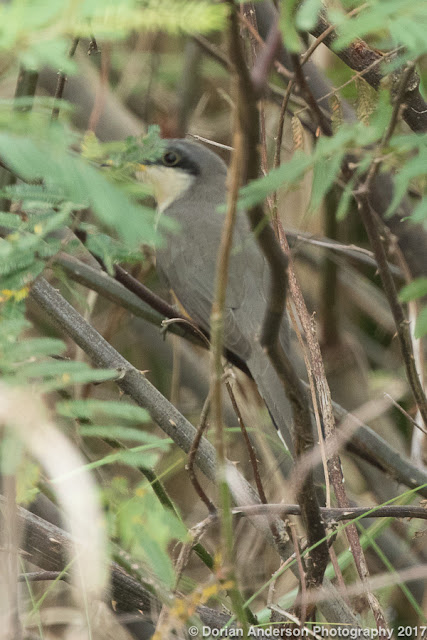 After our visit to the coast, we headed back inland - where the rains had since stopped - to reach Cockscomb Basin Wildlife Sanctuary. That night (night 3) we stayed in a very primitive research station that at present is not suitable for 95% of visitors. There was electricity in the evening only, and no hot water at any point. Needless to say there was no wifi. I actually loved it, but I think most folks would be best staying somewhere else and commuting into the park to bird. We birded Cockscomb that evening (Day 3) and the following morning (Day 4). Highlights included Great Tinamou, Crested Guan, White Hawk, Uniform Crake, Black-headed Trogon, Gartered Trogon, Lineated Woodpecker, Black-faced Antthrush, Northern Bentbill, White-collared Manakin, Long-billed Gnatwren, Crimson-collared Tanager, Yellow-tailed Oriole, and Chestnut-headed Oropendella. Clearly, the birding was fantastic, overwhelming even at times. The checklist from the evening outing can be found here, and the checklist from the morning outing is here. 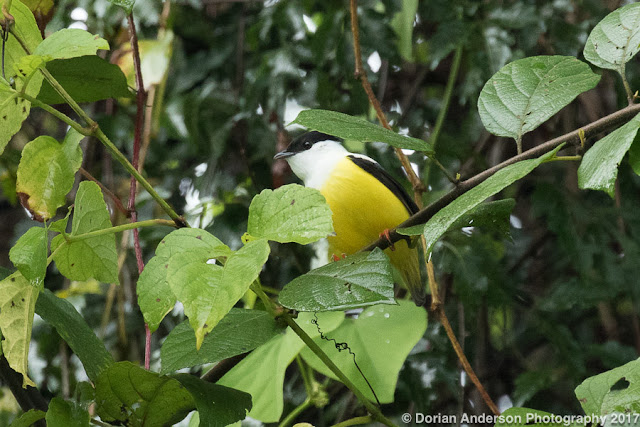 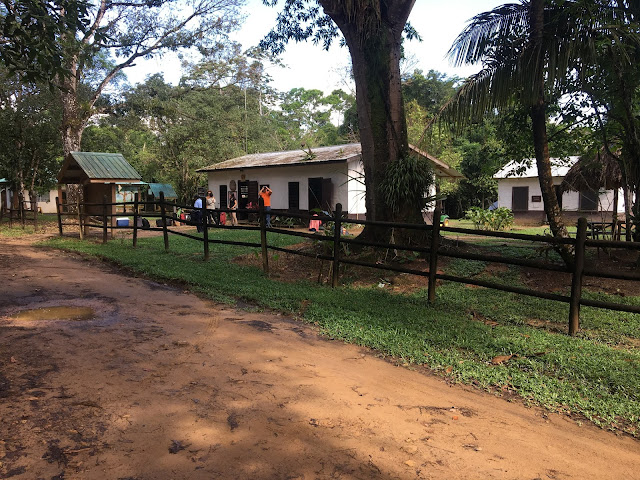 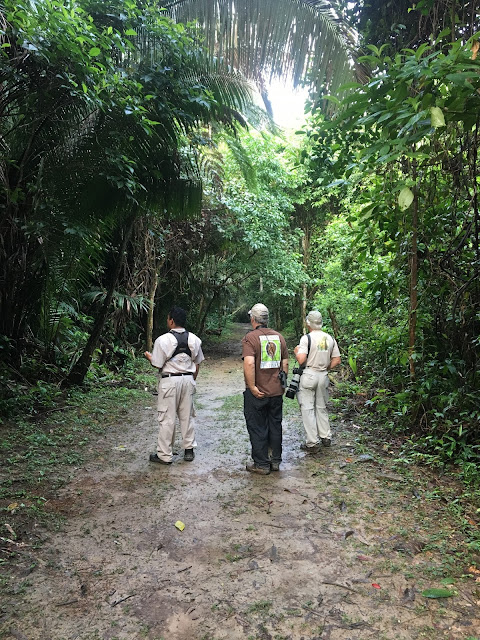 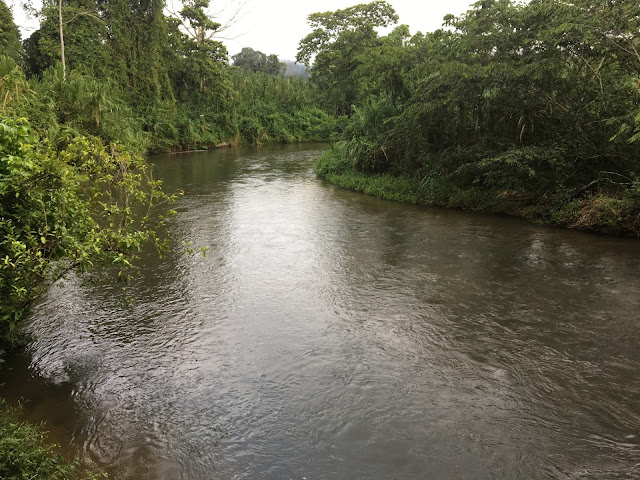 After our morning at Cockscomb we headed back North and turned east to arrive at the Guatemala border after lunch. The blog will continue with Guatemala's Petén Region and its Mayan archeological sites next time, but I do want to leave you with a few additional impressions of and notes on Belize. The first of these is the generally huge potential for birding and ecotourism in the country. With such a small population and a big conservation presence, Belize's birding product is likely to be intact well into the future. Local guides were friendly and very knowledgeable, particularly those from Paradise Expeditions. They knew the birding areas and they really spent the necessary time to get us onto birds. It is worth noting that most people in Belize - and everyone in the tourism arena in the country - speaks English, the guides included. So, English in unlikely to be a barrier to any visit. 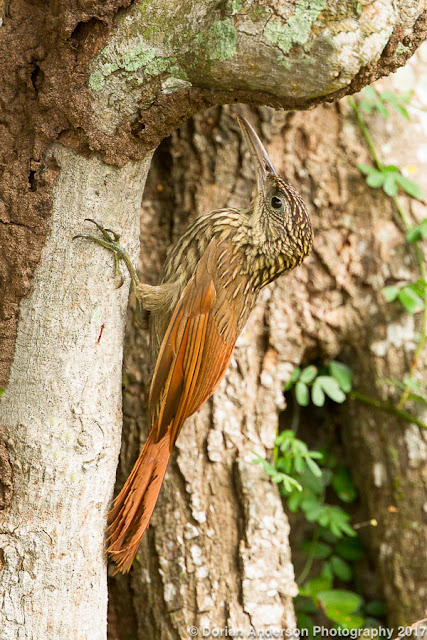 Lodging options in Belize are admittedly not as extensive as other places, but that contributes - for the better as far as I am concerned - to the generally rustic feeling of the place. If you're OK keeping the focus on birding, this won't at all be an issue. If you're looking for lodges with attached spas and such, most won't fit that bill. We didn't visit the Chan Chich Lodge, but I know from reputation that it is supposed to be really nice.

As my LA life has made me constantly aware of traffic, it is worth mentioning that there was little traffic anywhere. Belize City, into which you'll fly, has only 50,000 people, so escaping its clutches is much, much less painful than say, San Jose. The Hummingbird Highway was well-maintained and generally smooth sailing. Side roads are unpaved and can be beat up, but that's industry standard for Latin America. Driving one's self around Belize would be pretty straightforward.

Wish the sun was behind me instead of
in front of me, but you get the idea! 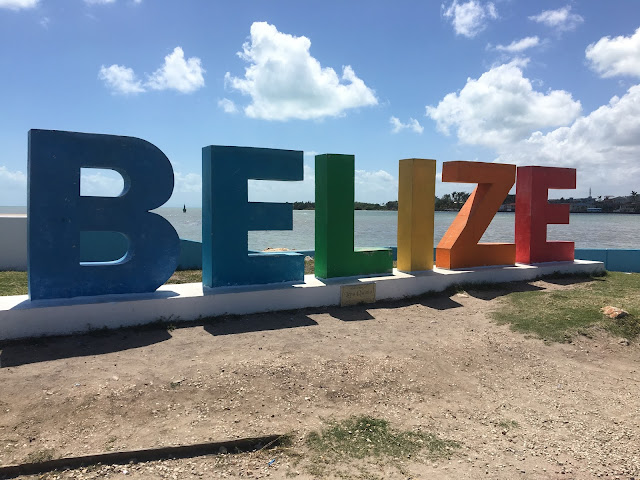 So there it is, a quick overview of Belize as done in 3 full days! It would be very possible to spend 2 nights in each of the areas we visited to make a trip of about a week. Alternatively, a couple days in Belize could be coupled with a few days in Guatemala's Petén to see the Mayan sites. This is exactly what I did, and it will be from there that we pick up next time! Cheers!

Lastly, If you like this content, PLEASE consider signing up to 'follow' this blog. All it takes is your email address, and you'll get updates whenever new posts are released (about once/week, that's it). This will help me understand my readership and display its collective weight. You can sign up to follow at the right hand side of the blog, just below the 'Archives' section. Thanks to those who have done this already, and I look forward to more of you joining us in the future!
Posted by Dorian Anderson at 7:48 AM