Sonia and I moved into our new digs in LA at the end of last week. We are getting settled and hope to do some local birding this weekend.

I spent Monday of this past week in Ann Arbor Michigan where I spoke to several groups of students and faculty about my biking and birding adventure from last year. In my various talks, the main point I tried to convey to the students was life is often a lot less linear than we make it for ourselves. There is room for exploration, diversion, and even failure. I additionally tried to stress the importance of travel in one's personal development. As I told them, my adventure last year will ultimately prove more valuable than any of my various degrees from or tenures at academic institutions.

During my campus visit, I was fortunate to be given a behind the scenes tour of the bird/ornithology collection at the University of Michigan Museum of Natural History. This was conducted by long time collection manager Janet Hinshaw. She took me through both the egg and nest collections before we examined a number of actual bird skins. Her knowledge of bird ecology and evolution was simply extraordinary, and I listened intently to the interesting information that she dispensed with such apparent ease. 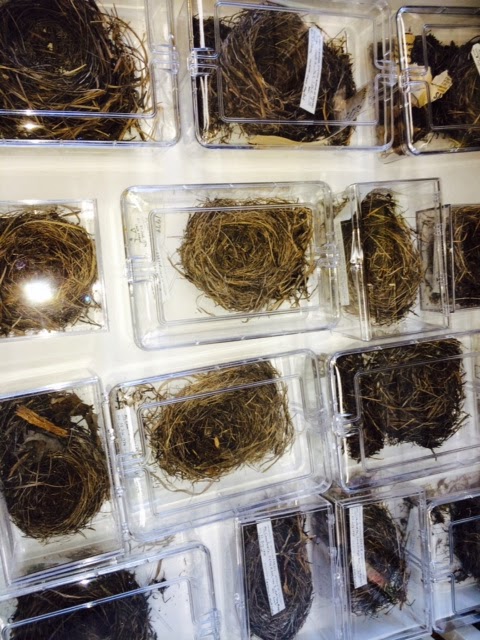 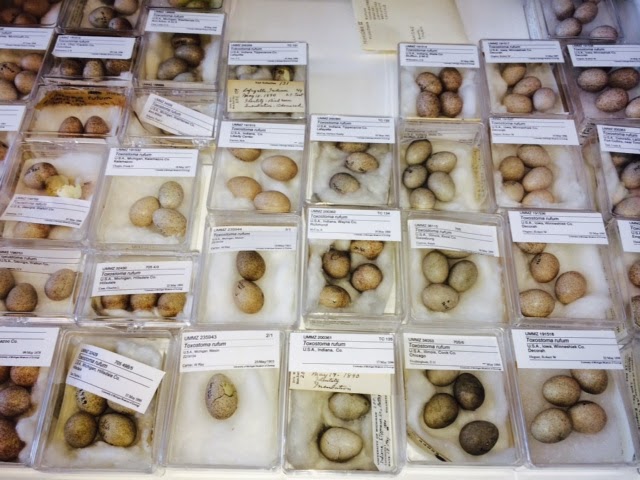 It was fascinating to learn how brood parasites (some cuckoos, cowbirds, etc) can influence egg evolution. Brood parasites lay their eggs in other birds' nests. These nest parasites rely on egg mimicry to camouflage their eggs among the host's own eggs. The hope is that the host won't recognize the foreign egg and will raise the chick that hatches from it as its own. In the absence of nest parasites, the clutches of eggs laid by individual females across a given species appear remarkably similar. There is no selective pressure to deviate from the mean. However, when brood parasites are present, clutches of eggs from different host females can vary widely in appearance. This ensures that no matter how the eggs from a given nest parasite look, they will stand out as foreign in at least some fraction of hosts' nests. In this way, the hosts stay one evolutionary step ahead of the nest parasites. Pretty cool stuff!

I also had the chance to handle bird skins from extinct species. I handled Passenger pigeons and Carolina Parakeets. I also examined an Ivory-billed woodpecker and a Bachman's warbler, two species that have not been formally declared extinct but should be probably considered so for most practical purposes. Both Janet and I agree that it is important to keep these last 2 birds in the field guide just in case someone finds one of them - somewhere. Part of the point of this blog is to raise awareness for birds and their conservation. Hopefully, I'll do at least something to ensure that more species don't disappear in the near future. 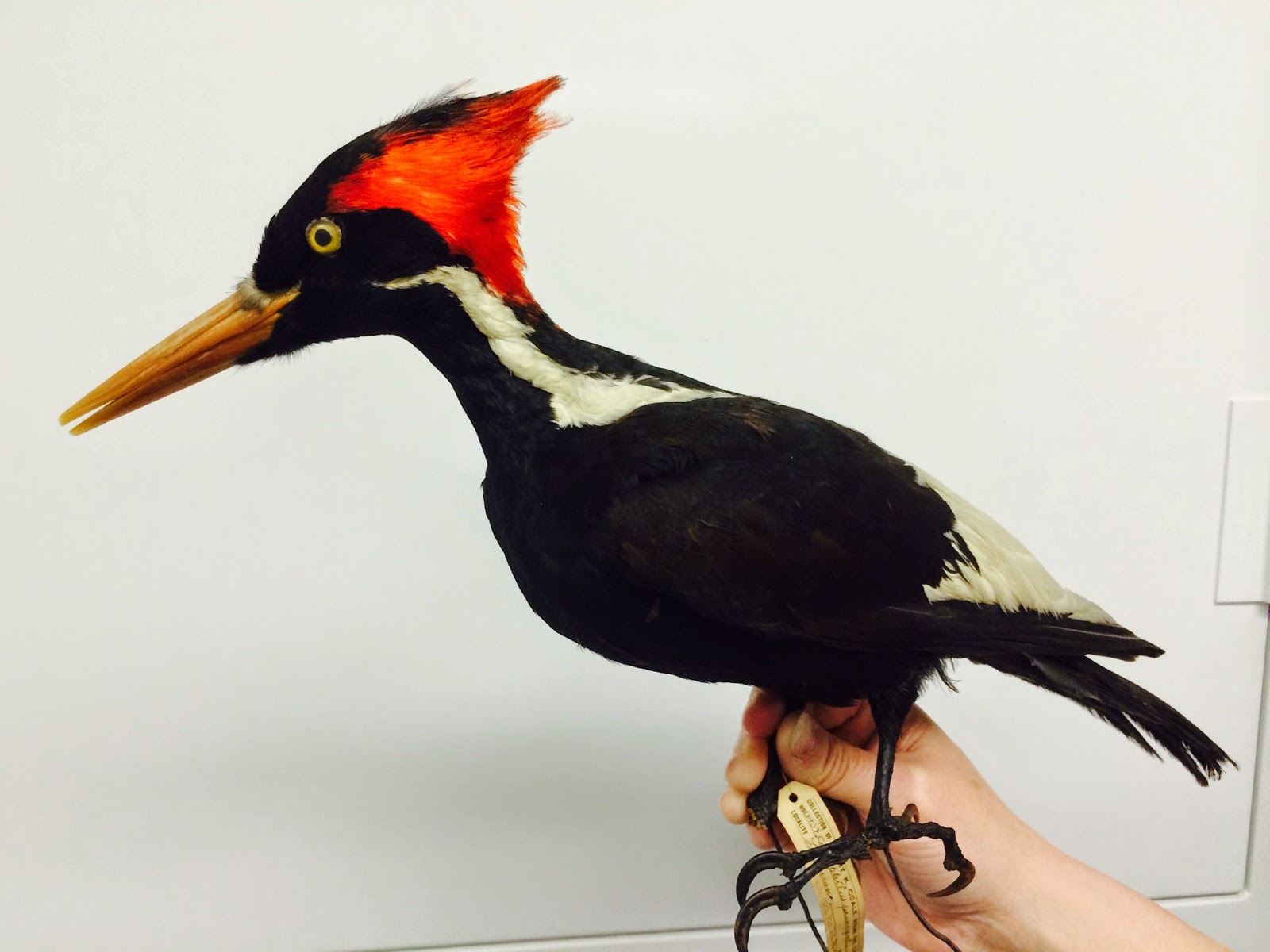 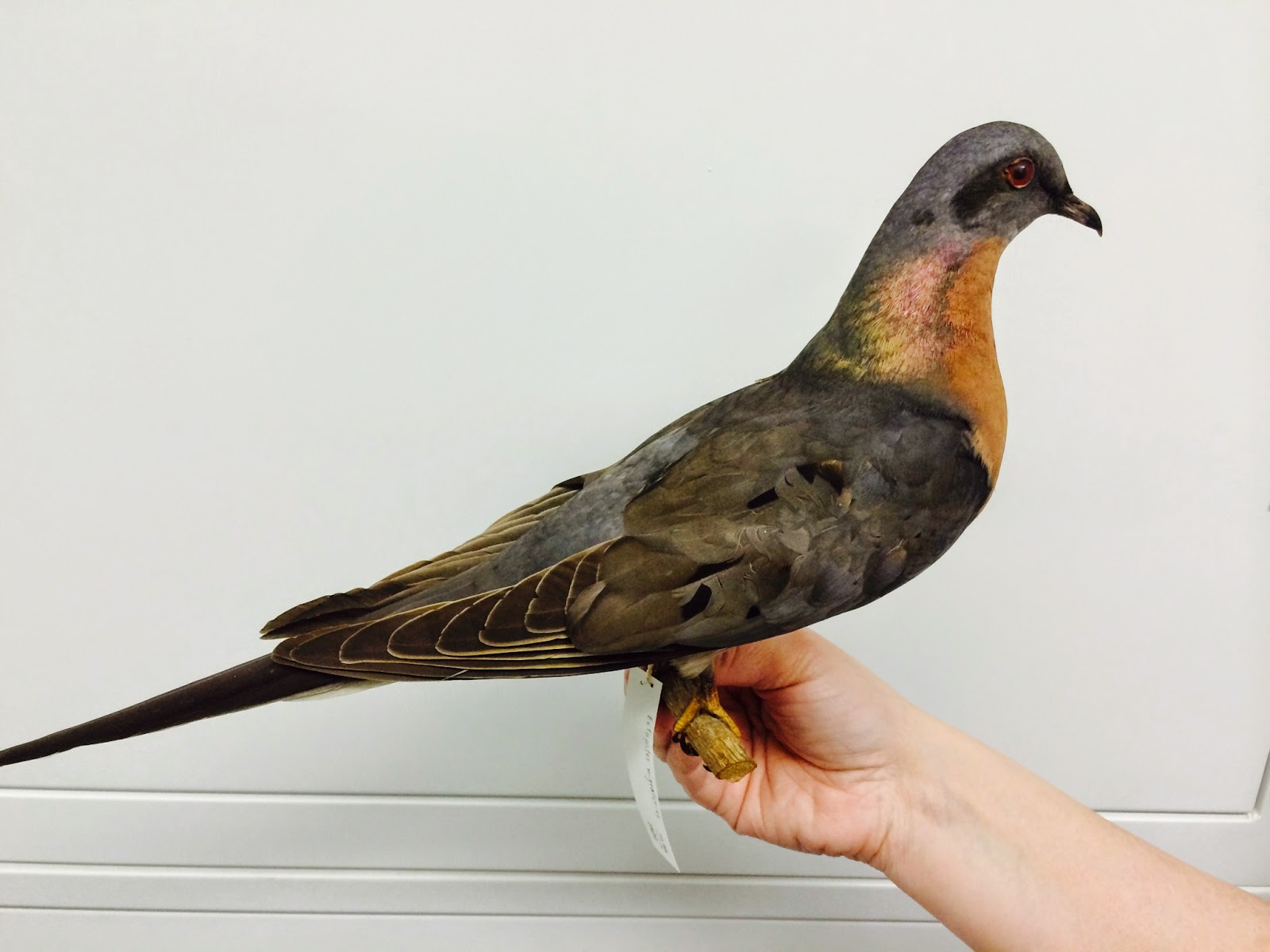 Then there was this big thing (see below). No it's not a dinosaur, its a Southern Cassowary. These five foot tall birds live in the Australian tropics. Sonia and I were fortunate enough to find 3 of these on our 2010 trip to OZ. I can say with certainty that the Southern cassowary is the oddest bird I have ever seen in the wild! 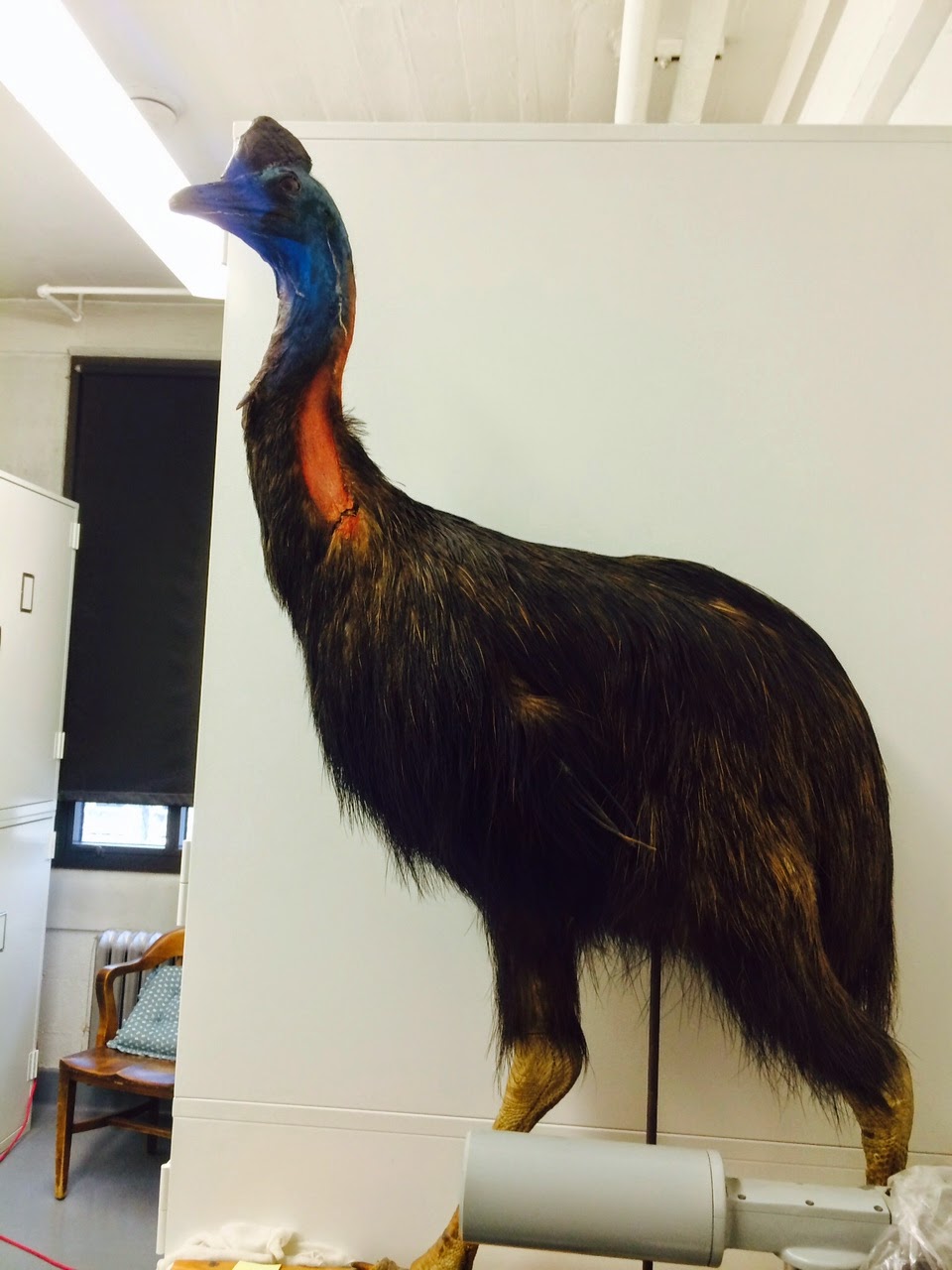 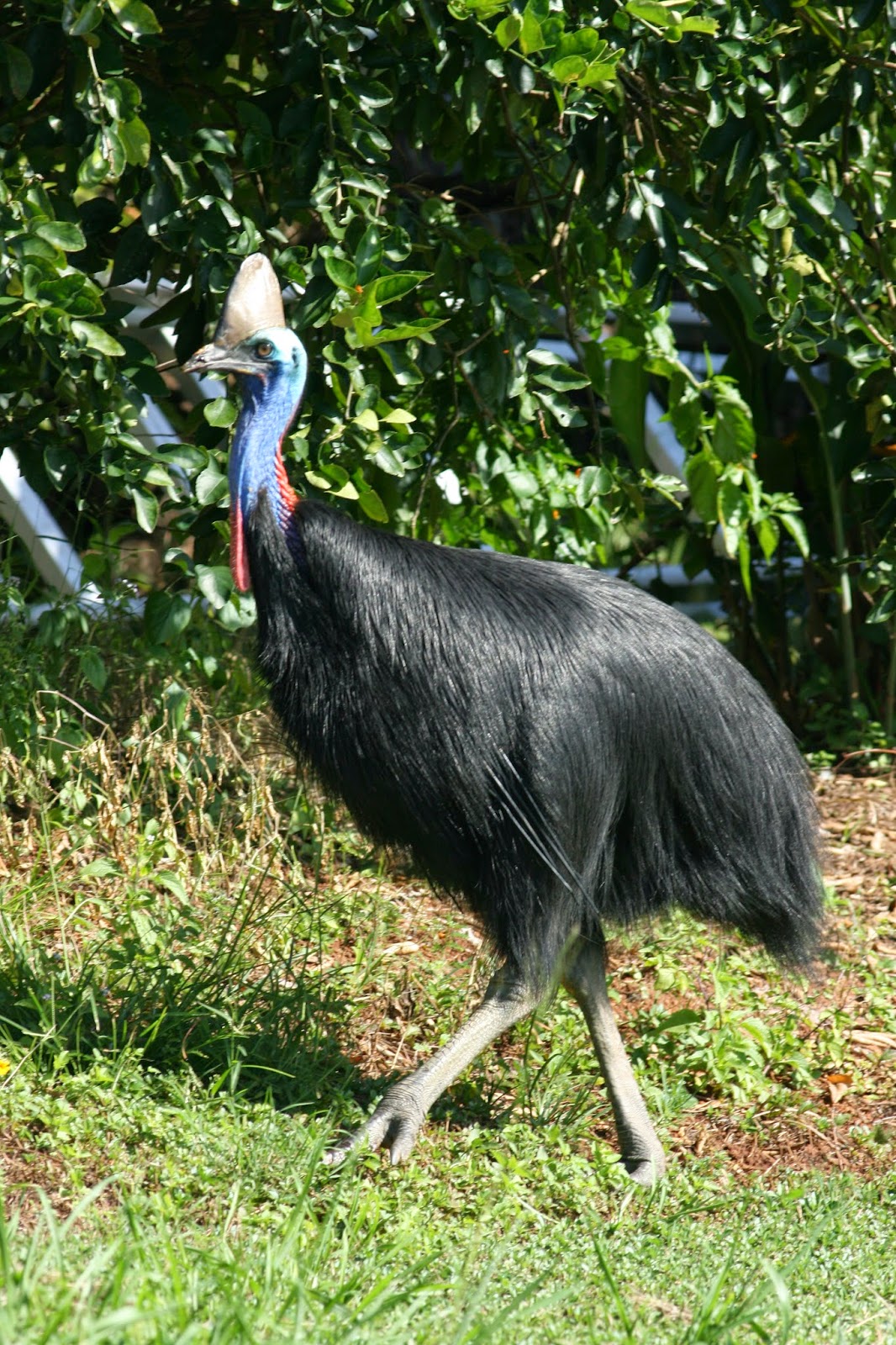 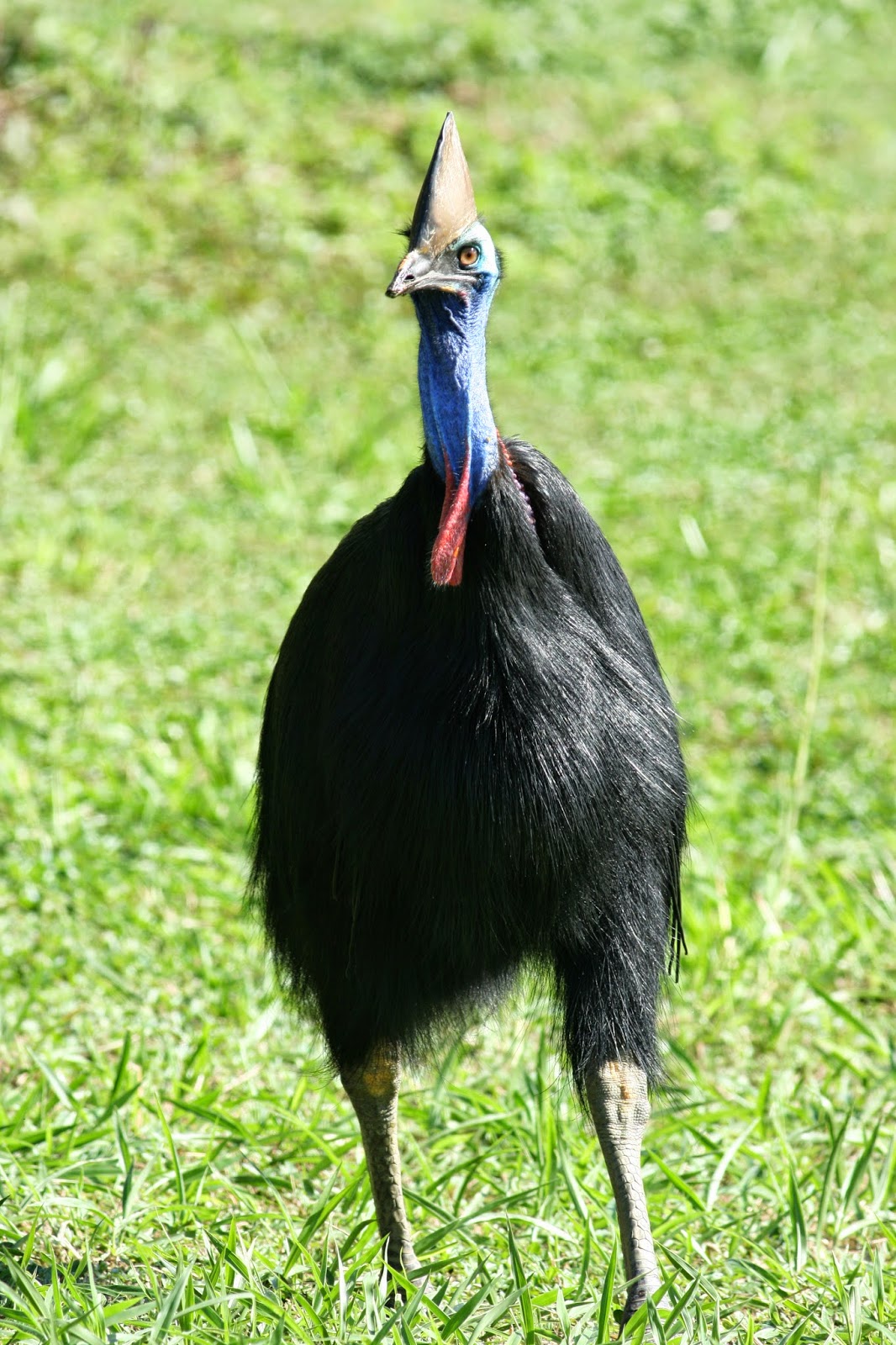 Just for fun, Janet also showed me Harpy eagle. These huge birds of prey live in Central and South America where they feed on monkey and sloths, among other animals. Check out how big the feet and talons are! 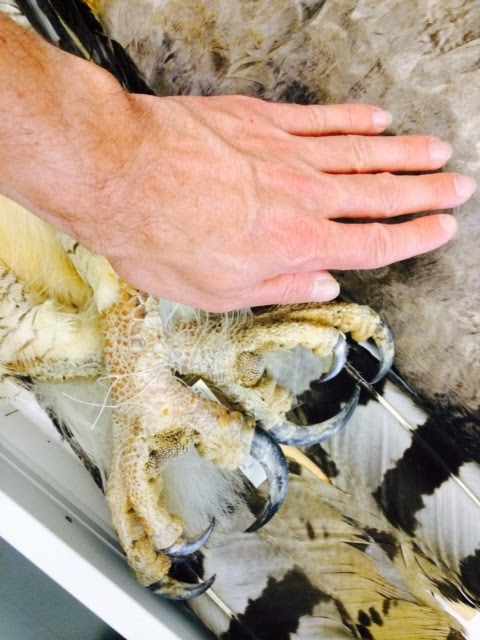 After showing me some of the more popular birds in the collection, Janet asked if there was anything else I wanted to see. "Red-bellied woodpecker" was my response. I chose this rather common bird for a very specific reason. Sonia (my girlfriend) goes crazy every time we see this species. She always complains that it should be called Red-headed woodpecker. She knows that that name is already taken by a properly Red-headed woodpecker, but she points this out every time anyway. Well, how did the Red-bellied woodpecker gets its name then? The answer is that many birds were named from their skin specimens. In collections, these lie exclusively on their backs. When looking down at a these skins, Red-bellied woodpecker makes perfect sense. From this view no one would have thought to name it Red-headed or Red-capped woodpecker! 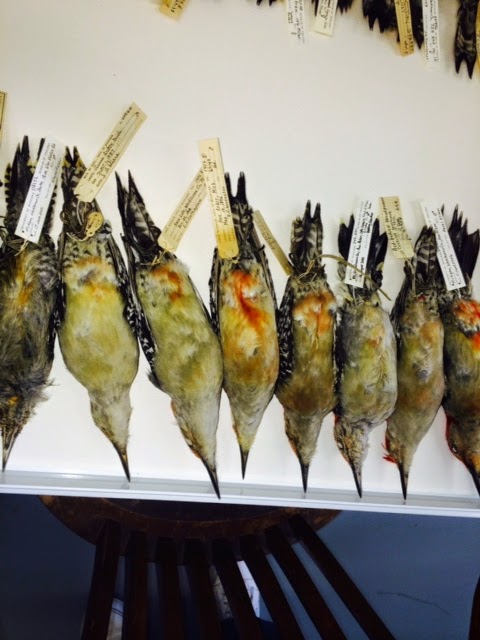 My visit was clearly lots of fun and very informative. I want to send out a personal thank you to Janet Hinshaw for the tour, as well as to Tim McKay who invited me and organized my whole visit. The University of Michigan looks like a really great place to live and learn! I hope to visit sometime again in the future.
Posted by Dorian Anderson at 3:59 PM