After my great success with Lesser prairie-chicken (LEPC), I turned my attention to its slightly larger and generally more common relative, the Greater prairie-chicken (GEPC). This bird has a significantly wider distribution that the LEPC, but few places are as productive for it as the sand-sage north of Wray, Colorado. It was there that I headed after Dodge City (KS).

One of the things I love about the American West is the preponderance of old stuff left to decay in farm fields. From an environmental standpoint it can be a bit depressing, but from a photographic viewpoint all this old junk provides countless opportunities to showcase the historical interaction between Americans and the land they inhabit. Unfortunately, most of these finds are fortuitous and as such must be photographed in whatever light presents itself at that exact moment. This means a lot of washed out, midday shots on which I elect to pass. As I approached Wray from the south, I found this amazing old station wagon along Route 395. The cloud cover muted the harsh light just enough that a 2pm shot proved workable. This shot reminds me that whatever damage we humans do the landscape, nature will, given enough time eventually find a way to triumph. 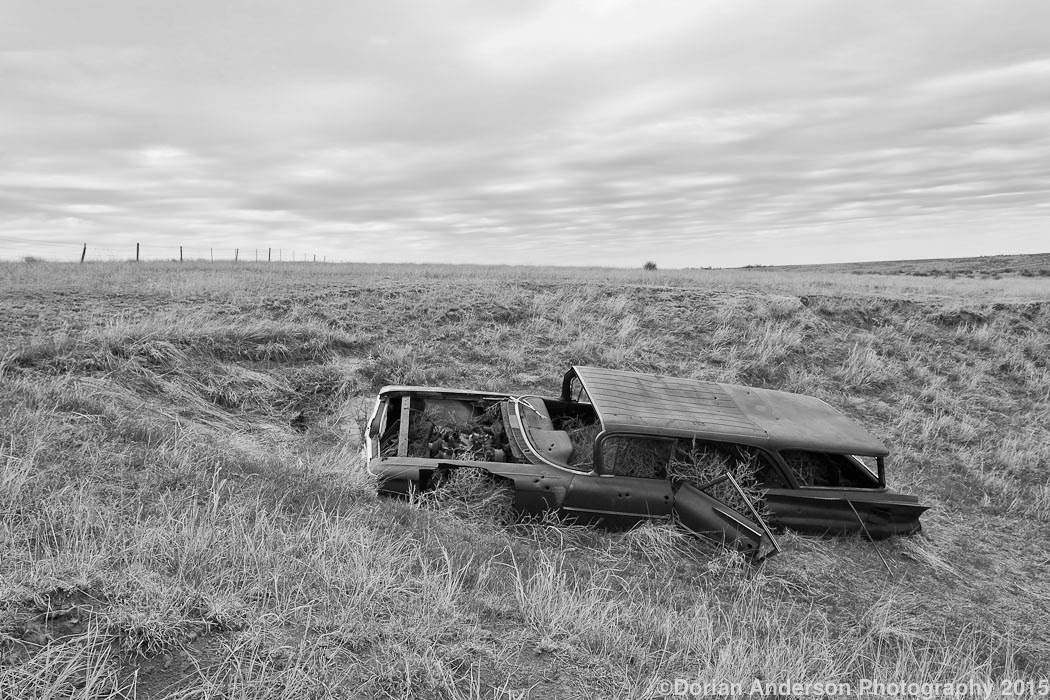 I arrived in Wray on Thursday afternoon. Local landowners had put me onto 2 GEPC leks that they thought would be particularly productive from a photography standpoint. One was on the crest of a hill, and the other was at the bottom of a bowl. This will prove relevant in a bit. I scouted both empty leks on that afternoon so that I would have an idea of how to play things the next two mornings. Luckily, the forecast for both days was clear which meant I would have nice light for my shoots.

It snowed about 2 inches Thursday night. I was stoked since I thought the snow would add some interesting character to whatever shots I could get on that first morning. Sunrise on Friday was at 6:30am, so I decided to be at the lek area at 5:15am. This would give me the chance to settle in before the birds arrived. It was pitch black when I arrived, and I hunkered down in the snow for the next 3 hours.

My view of the moon 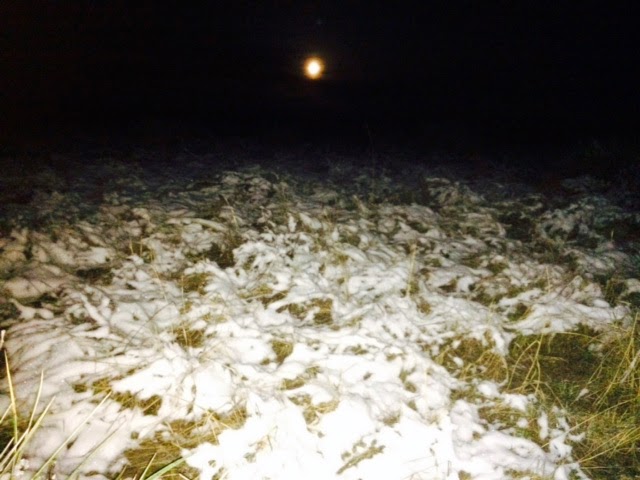 Birds started arriving well before sunrise, and eventually about a dozen males were strutting around from 20-60 feet from me. The sun eventually crested and gave me the light I would need for my shoot. The problem was that I had in the pitch black miscalculated the curve of the hill and found myself too low with respect to the birds. This meant most of the birds were hidden behind the hill’s crest where photographing them was impossible. There was also a lot of foliage at this site making clear shots very scarce. After 2 hours one bird did run up onto the hilltop. This was the only clear shot I had all morning so I had to make it count. I was able to crack off about a dozen frames before he ran off. These were the only shots I took in the 3 hours that I lay relatively motionless in the snow. Luckily, they proved to be nice! The first shot is the full frame. I wish I had a bit more room at the bottom, but I think the OOF (out-out-focus) snow helps to mitigate this technicality. Once the lek started to break up around 8:30, I slinked down the hill and headed back to my motel for a nap. 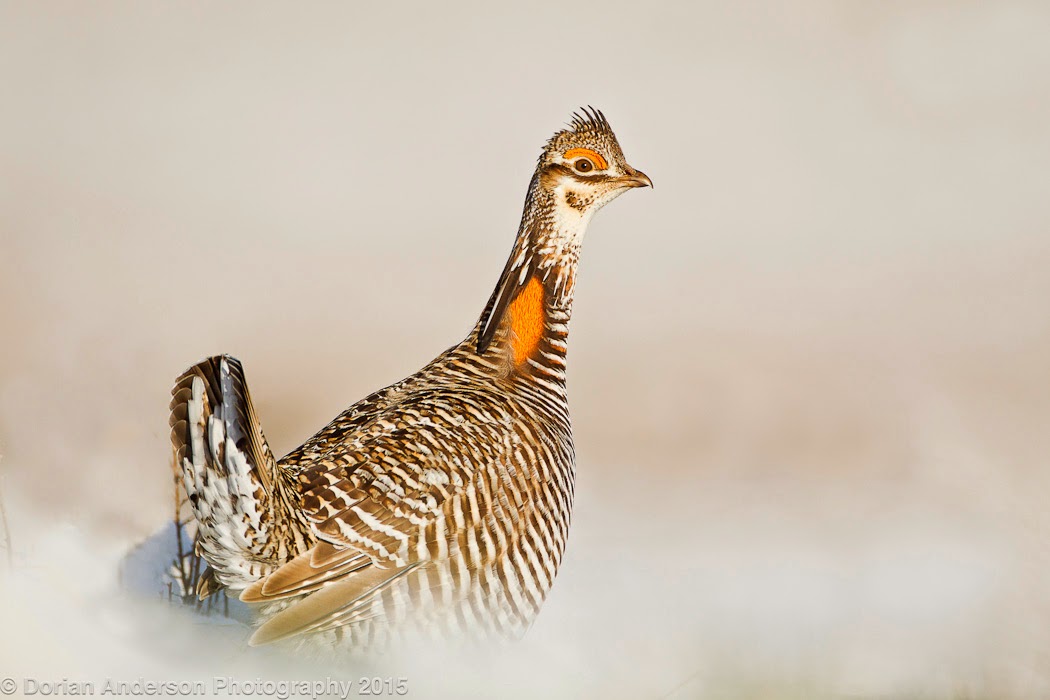 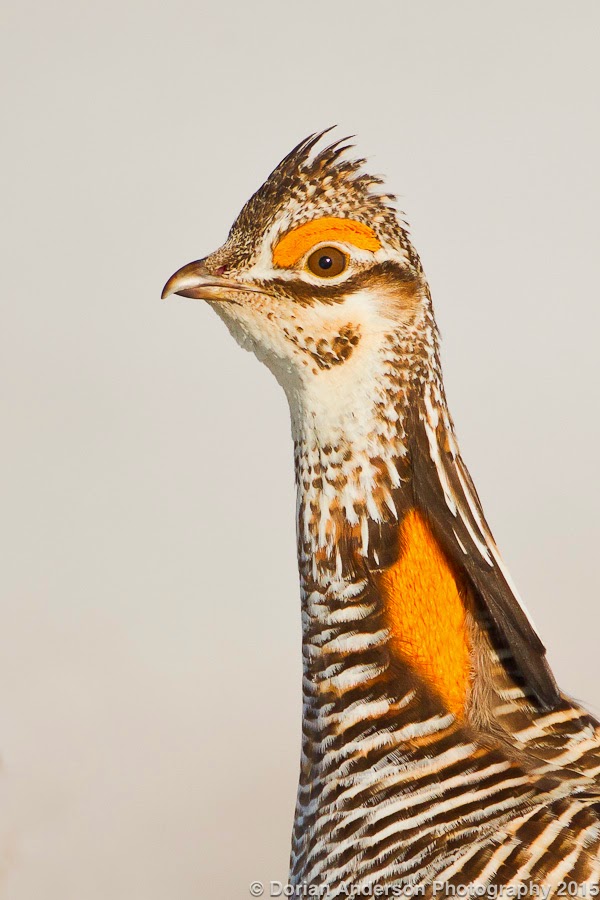 A view of the snowy roadside on my way out Late that afternoon, Friday, I revisited the second lek, the one at the bottom of the shallow bowl, to make sure no such topographical miscalculation occurred when I visited it the following morning. There were quite a few birds strutting around that evening, and I made careful notes from several hundred yards away as to what areas the birds preferred. I noted a nice raised area surrounded by some grass that looked like it would be a relatively concealed but productive perch. It was about 16 fenceposts west of a particularly obvious bush. I would need to count these posts in the dark the following morning to find the spot I had eyed through my scope that afternoon. I also noted that there was much less grass and sage at this lek. I hope this would translate into unobstructed shots the following morning.

I returned that spot at 5:15am to get ready for my second shoot. The temperature was 29F. Lying on my belly in the grass (Thursday night’s snow had melted off by Friday afternoon), I though I was hallucinating when the moon disappeared. Something was off, but the sound of arriving and displaying birds distracted me from this astronomical aside. There were birds all around me. Their eerie booms and constant cackles sounded like something other-worldly. As the sun slowly rose, I was finally able to attach feathers to each source of sound. The birds today were very tolerant of my presence, and they even permitted a bit of crawling so as to reposition myself for clear shots. This shoot proved to be fantastic, and I walked out with a number of really nice frames. Females were in very short supply; They probably represented 6 of the ~30 birds that were present. At one point just before sunrise a coyote ran right through the lek and put all the birds up. Unfortunately there wasn’t yet enough light to shoot this very beautiful and health looking canine. It was a perfect morning even before I figured out I had witnessed an eclipse! 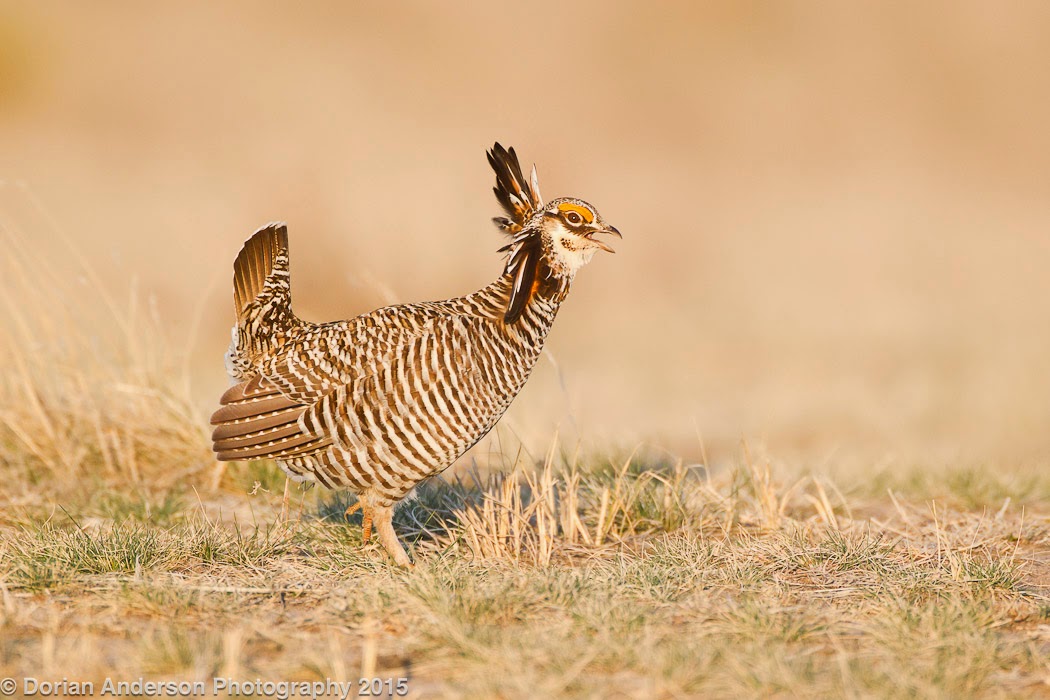 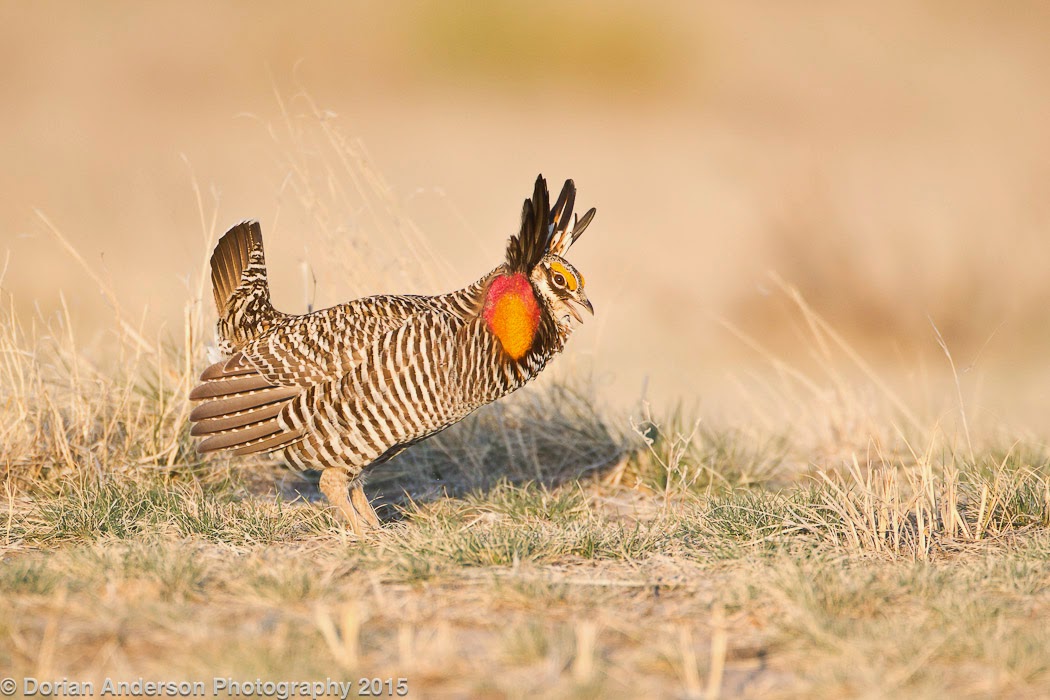 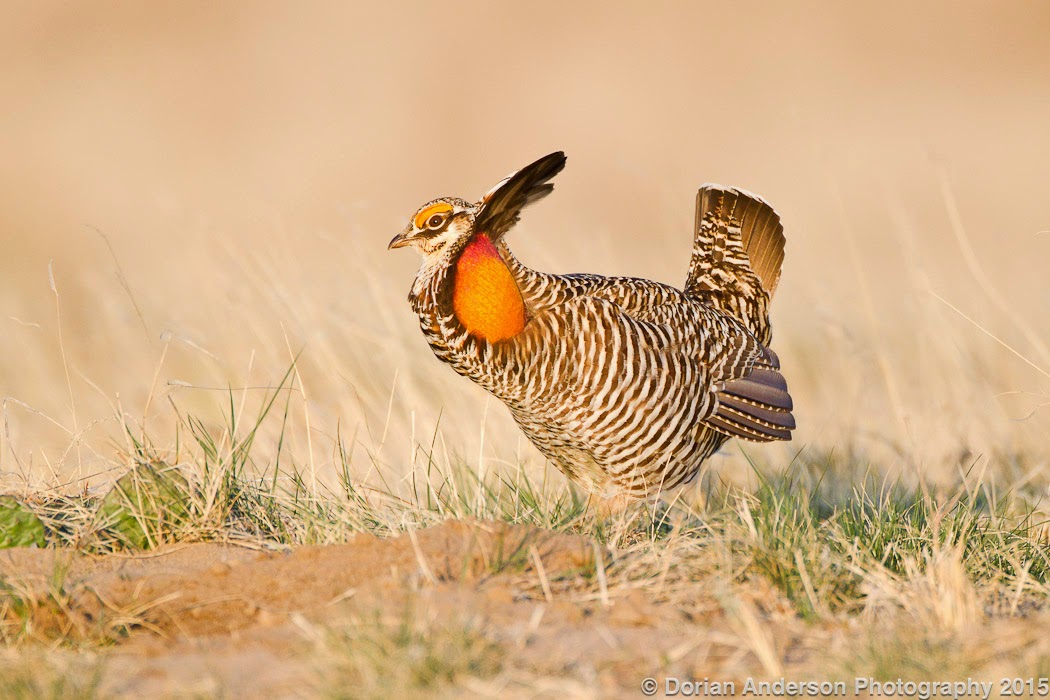 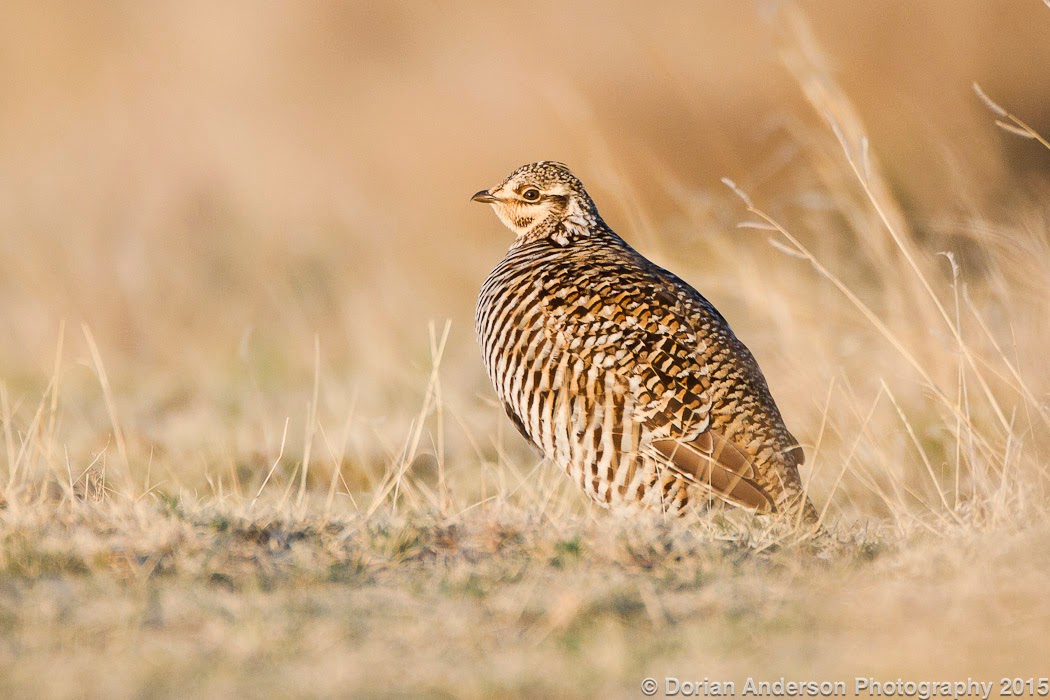 With these huge successes behind me, I left Wray midday to head towards Denver. Sonia was flying in to do the last segment of the cross-country drive with me. I collected her at the airport and headed west into the mountains where we would seek the next prize, the Greater sage-grouse……..
Posted by Dorian Anderson at 12:35 PM

Email ThisBlogThis!Share to TwitterShare to FacebookShare to Pinterest
Labels: Bird Photography, US birding