Hello Everyone! I am sorry it has been so long between entries, but sometimes life gets in the way of birding. I spent the end of last month in Boston packing our stuff from our storage locker into a ship-a-cube-type-thingy to be carted across the country by some third party (ABF). Our whole life essentially fit into a creatively-packed 330 square feet (6x7x8)! Since then I have made steady progress westward en route to Los Angeles. While late-March and early-April mean relatively slow birding across the continent, grouse provide a very welcome exception to this generalization. With this is mind, I slowed my westward pace as I reached Western Kansas. Here, I hoped to rendezvous with my lifer Lesser prairie-chicken.

I will say that driving across the country presents some distinctly different impressions than biking across it. I forgot how much ground a person cover in a car. For example, on Day 2 of this journey, I covered ~730 miles from Philadelphia to Marshall, IL. This took approximately 11 hours. At a challenging but manageable 81 miles per day, this distance would have would have likely taken 216 total hours - 9 full days - on the bike. Using these numbers, this means that driving is 20 times faster than biking! In a car, I am also able to largely ignore the wind forecast and road conditions. These variables mean everything to a cyclist and virtually nothing to drivers. The ability to ignore these complications is further testament to how easy cars make our daily lives. Unfortunately, this ease comes with a price, a price that the environment ultimately pays. If we acknowledge this price, we are in a better position to think about how each of us might minimize it moving forward.

Interestingly, I did not visit any points between Philadelphia and Dodge City last year on my bicycle Big Year. Despite the great birding to be found at many of these points, I bypassed most of the midwest due to time constraints. My first birding stop on this westbound run was a quick and casual visit to Horseshow Lake just outside St. Louis. This stop was motivated purely by Eurasian Tree Sparrow, an introduced species I have seen only once before (on my first cross country drive from Palo Alto to Boston after college). After ticking this bird (for what list I am not sure!), I continued west towards Dodge City, KS.

Lesser prairie-chicken (LEPC) is a grassland bird that has experienced great declines in its historical numbers. One piece that I found online puts current population levels at 15% of those in the early 1800s. Not surprisingly, habitat destruction is cited as the prime reason for this alarming drop. The birds have struggled as their shinnery oak and sand-sagebrush grassland homes have been converted to open cattle ranges and farm fields. Southwestern Kansas has one of the healthiest populations of the birds, and it was there I headed with hopes of finding this would-be life bird. 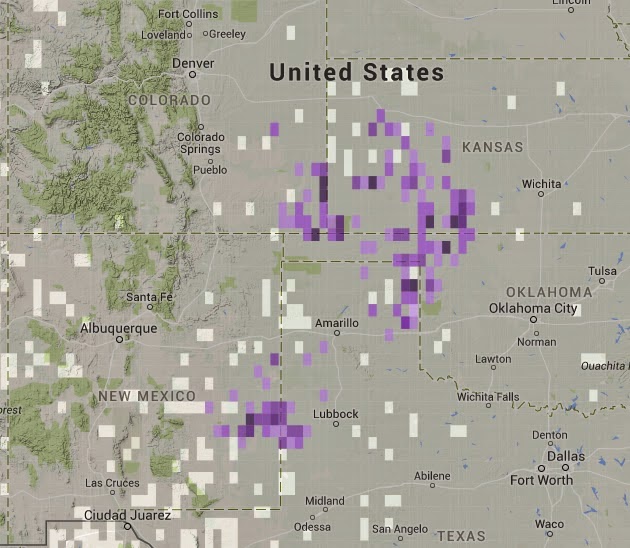 Looking in eBird, there were several recent sightings (in the last week) of LEPC north of Dodge City. I arrived in town late in the afternoon, and, after a brief nap, headed out to the general area of these sightings. Never having birded this area before, I was pleasantly surprised by the number of Ring-necked pheasants I observed. The 20+ I saw on that day were almost certainly more than I had seen in my life until that date. If I am lucky, I get 1/year in the northeast these days. I found the particular prairie-dog town from which LEPCs had been recently reported. Picking through lumps of prairie-dogs Burrowing owls, I methodically found 10 LEPCs hunkered down in the grass surrounding the town. This could not have been easier and fully verifies eBird as an amazing birdfinding tool. The birds were painfully inactive, so I decided to return the following morning under the assumption there would be more activity around day break. eBird checklist of my evening visit. Harris's sparrows were another nice bird.

A 5:30am wake-up put me back at the birding area at 6:30 - sunrise was at 7:30. It turns out that the lek was relatively close to the road. Starting at around 7:00am, there was a huge ruckus as 10-11 males cackled, boomed, foot-stomped, and fought with one another in hopes of impressing the limited (1-2) number of females present. This went on for at least the next 2 hours. Some of the birds were still at it at 9am when I finally left. This was my first lek experience, and it was truly a spectacle that I will never forget. I find it fascinating that this behavior is genetically hard-wired into this and other grouse species. Humans go to dance classes in large part to attract mates. These male birds need no lessons before they perform their highly stereotypes dances. Equally interesting is that females some how discern between what to my eye looked like identical 'Humpty Dances' (best party song of the 90s!). 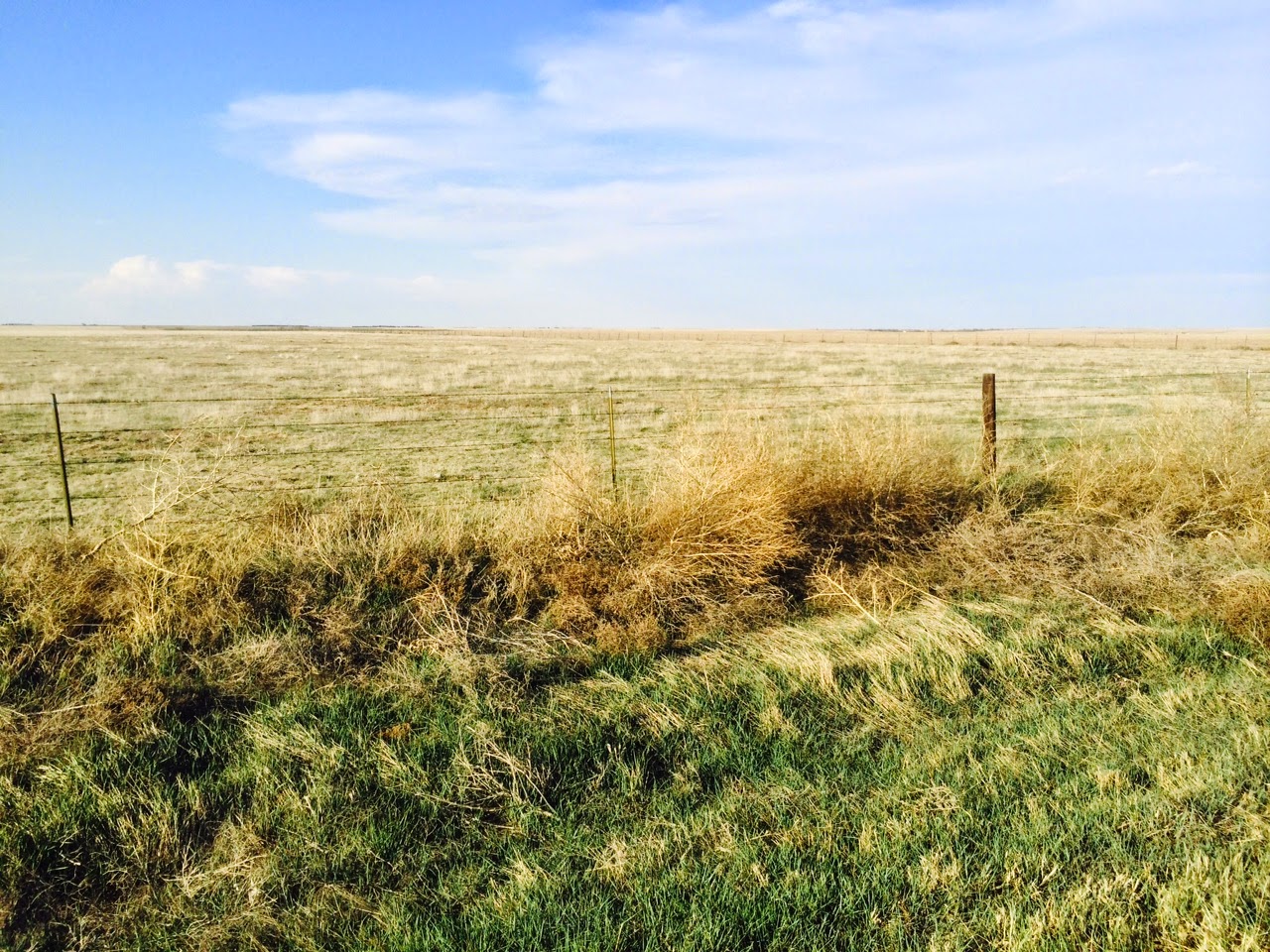 Most of the birds were out of photo range, but one individual did fly in and land with in acceptable range before quickly running off elsewhere. This shot still represents an ~80% crop (kept 20%). 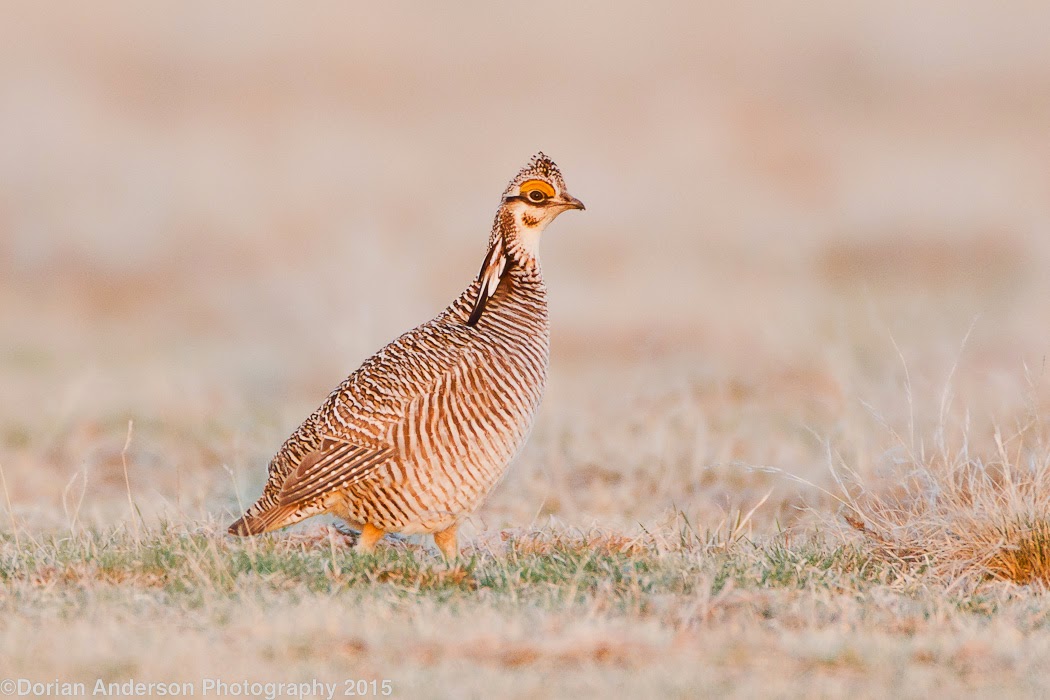 Posted by Dorian Anderson at 5:10 PM

Email ThisBlogThis!Share to TwitterShare to FacebookShare to Pinterest
Labels: US birding