Among Golden State birds, none are as majestic or storied as the California Condor (CACO). The enormous vultures suffered near-terminal declines in the second half of the twentieth century -- poaching, habitat destruction, power line collisions, and lead poisoning reducing the population to 27 captives by 1987 -- but breeding programs and vigilant management have enabled a slow-but-steady recovery since that nadir. The birds currently number near 500, and the wild half of those are highly-localized in California, Utah, Arizona, and Northern Mexico. 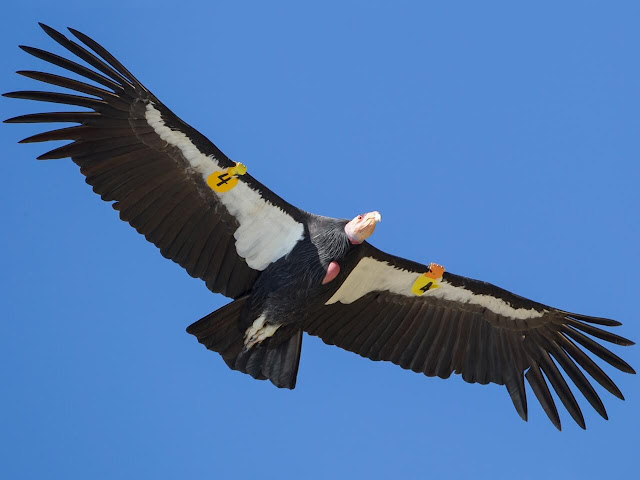 Setting my bike-birding sites on the iconic species, Pinnacles National Park emerged as my best bet; with 120 miles separating that location from my San Mateo apartment, it would be a significant undertaking. Triple-digit temperates would complicate my course, but I decided to brave the heat because a coastal detour on the outgoing leg would bring Black Swift (BLSW) into play, the uncommon breeder to depart the region by mid-August. If I went down the coast via Santa Cruz, spent an extra day kicking around the northern portion of Monterey County, continued to Pinnacles via Hollister, and returned north via San Jose, then I figured I pound out ~320 miles when all the twists and turns were considered. I'd also have chances for Cassin's Kingbird (CAKI) and Canyon Wren (CAWR) in Hollister and at Pinnacles, respectively, so the six-day journey could grow my cherished Bay Area Bike List by four species if everything went to script. 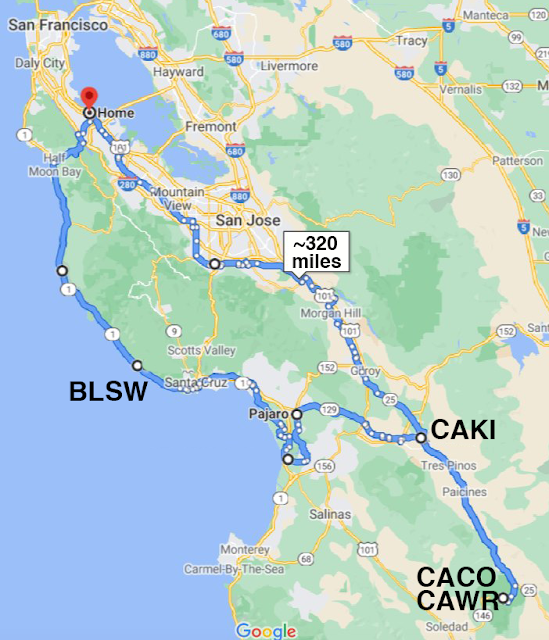 Day 1 - Tuesday, August 3 - The San Mateo and Santa Cruz Coasts
Black Swift had been reported from south of Davenport across the previous six evenings, so my plan was to reach that area by 6:30pm and hope a representative revealed itself before nightfall. I left home at 9:30am, crossed the coastal mountains on Highway 92, and turned south onto Highway 1 in Half Moon Bay. Sunny skies prevailed, and a slight NW tailwind lent assistance as I achieved Pescadero and Año Nuevo through the morning. Crossing into Santa Cruz County, I found Olive-sided Flycatcher at Rancho Del Oso, Purple Martin on Swanton Road, Peregrine Falcon on the Davenport bluffs, and California Thrasher on Bonny Doon Road. Continuing to Yellow Bank Beach, I set up shop on the cliffs and waited. Then I waited some more. Unfortunately, zero Black Swifts appeared by my 8:20 departure, and I winced when I saw eBird reports which noted that a single representative buzzed my approximate vantage at 8:22pm. It was a nice day regardless, the night spent with a cycling couple in Davenport. 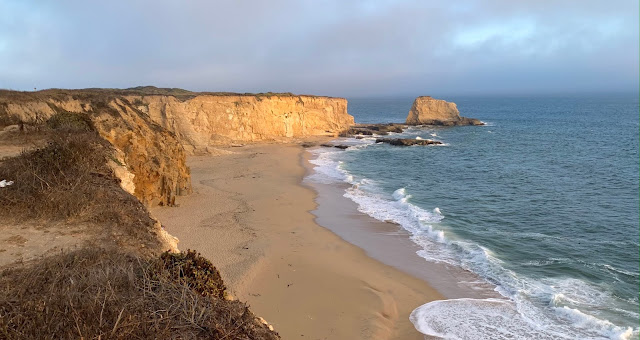 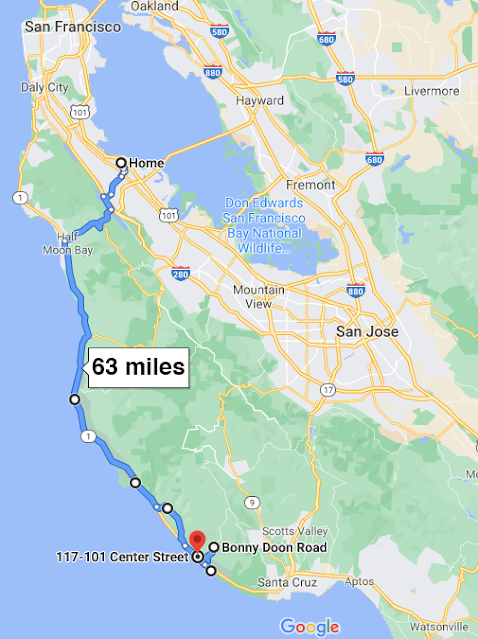 Day 2 - Wednesday, August 4 - The Santa Cruz Coast
Looking to avenge my BLSW miss, I returned to Yellow Bank Beach at 7:30am and immediately spotted my quarry buzzing over the bluffs for Bay Area Bike Bird #334. Additional swifts appeared in the next few minutes, and I had seven in my binoculars at one disbelieving point, the aerodynamic fliers offering eye level views as they knifed and wheeled over the ocean breakers. I didn't tote a proper camera for weight reasons, so forgive this sorry-ass digi-binoc. I had to go with a bird that was far away because the phone couldn't focus on anything closer. It was also kinda cool to add Pink-footed Shearwater to same the checklist as the swift, that pelagic spotted during a subsequent seawatch.

Black Swift at one million miles-per-hour 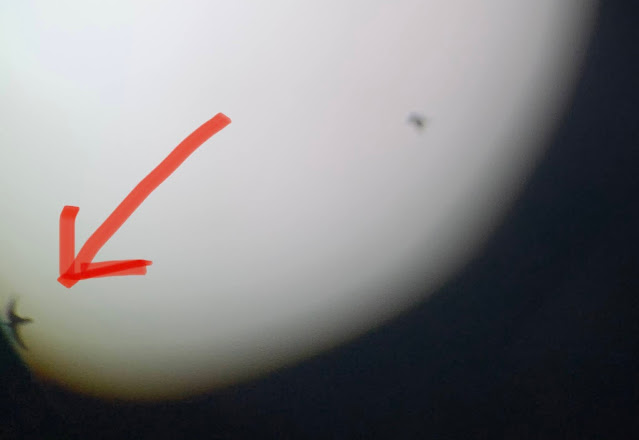 I spent the remainder of the day weaving along the coast and amassed 107 SCZ species after exploring Natural Bridges, Neary Lagoon, Corcoran Lagoon, and Pajaro Dunes. I'd submitted only one SCZ bike checklist previously -- from Skyline in winter -- so that haul increased my SCZ bike total to 117.

Approximate route from Davenport to Watsonville 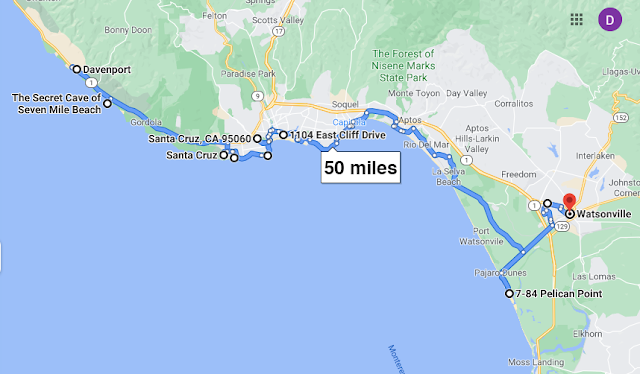 Day 3 - Thursday, August 5th - Monterey County
I'd not done any bike-birding in Monterey, so I decided to use the first part of this day to dip into that county. A stop at Moss Landing revealed a continuing Long-tailed Duck, and I spotted an out-of-season female Black Scoter in the inlet. Moonglow Dairy yielded a mid-morning Bar Owl hunting over the marsh, and Elkhorn Slough produced a lone Wilson's Phalarope. My morning birding completed with 95 Monterey species claimed, I headed east into San Benito County. I didn't find much around Anzar Lake, but I did spot a pair of Cassin's Kingbirds (Bay Area Bike Bird #335) near the Hollister WTP.  I was so tired that I didn't think to take a picture, but I did snap a record shot of another the next day.

Moss Landing (north side of inlet) 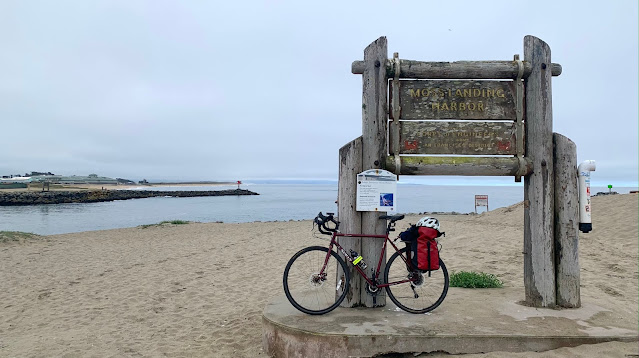 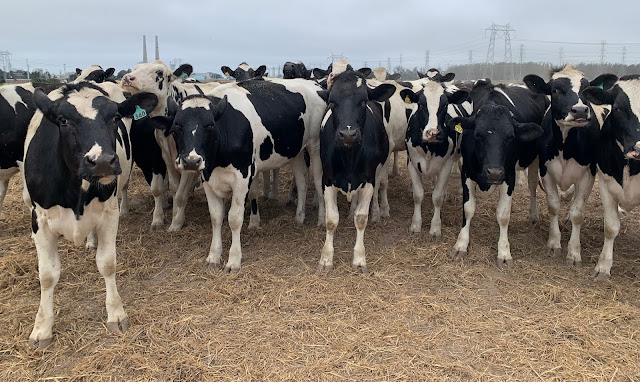 Approximate route from Watsonville to Hollister, via Monterey County

Day 4 - Friday, August 6th - Pinnacles National Park
I knew it was gonna get hella hot hella fast, so I left my motel at 6:30am, housed four donuts at Spudnuts, and cranked south along Highway 25. Paicines Reservoir held a nice assortment of waterbirds, and Phainopepla and Yellow-billed Magpie appeared as I battled through the rolling, up-and-down topography. By the time I covered the 35 miles to the Bear Gulch Trailhead, I'd netted 1,000 vertical feet from 1,600 feet of climbing.
It was already 10am, so I hustled up the trail with high condor hopes. I'd barely covered a quarter-mile when I spotted several candidates soaring high above the rocky formations, and I managed distant views of six individuals as the massive birds spiraled skyward through the next half-hour. All the birds disappeared to the west by 10:40, presumably towards Big Sur, so I was stoked to have arrived in time. Bay Area Bike Bird #336 secured, I used playback to pull a pair on Canyon Wrens (#337) from the rocks before vacating the gathering inferno. The afternoon heat wrenched moisture from me on the return ride, but I outlasted the sweltering conditions, regained my motel, and spent the remainder of the day recovering while watching the Olympics.

View from Highway 25 in morning 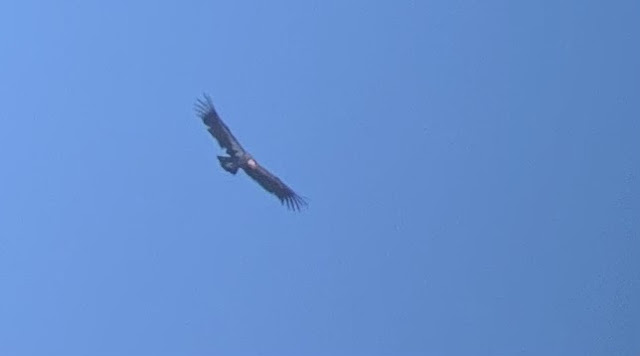 Canyon wren digi-binoc. Just happy to get anything given how fast it moved. 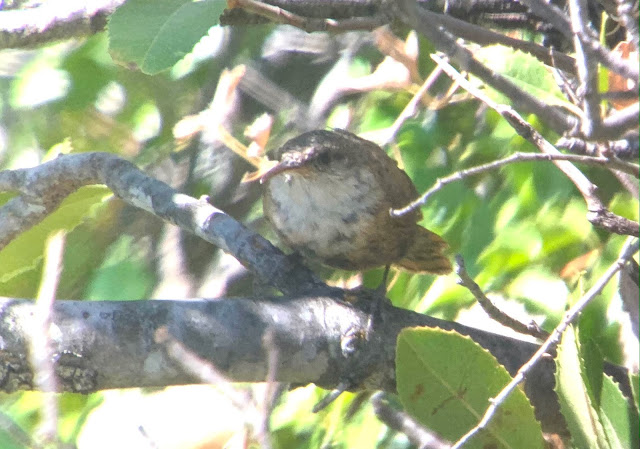 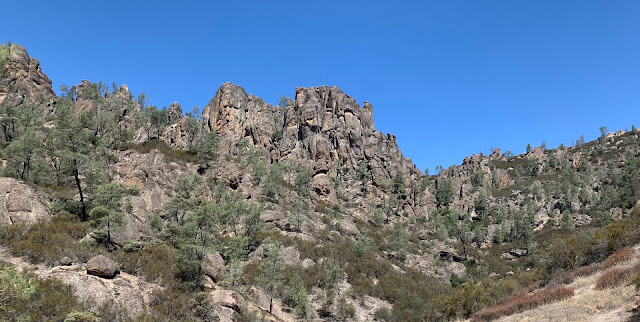 Approximate route from Hollister to Pinnacles (and back) 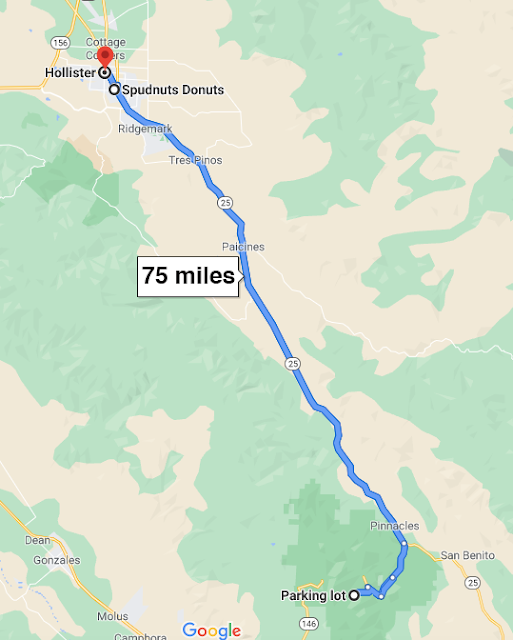 Day 5 - Saturday, August 7th - Southern Santa Clara County
Rolling north out of Hollister, I rode a fortuitous southern tailwind towards San Jose through the morning. I'd planned to spend the middle part of the day birding Coyote Creek and Almaden Lake Park before hunkering down for the night, but my aspirations swelled when my three target Santa Clara birds -- Wood Duck, Osprey, and Scaly-breasted Munia -- appeared without any effort. With sudden time and energy to spare, I decided to push home rather than drop $90 on a motel. Despite already putting down 55 miles, I managed to cover the final ~30 miles in ~2 hours! I'm not sure what The Wok put in my sweet and sour tofu the previous night, but I felt unstoppable all day.

Approximate route from Hollister to home 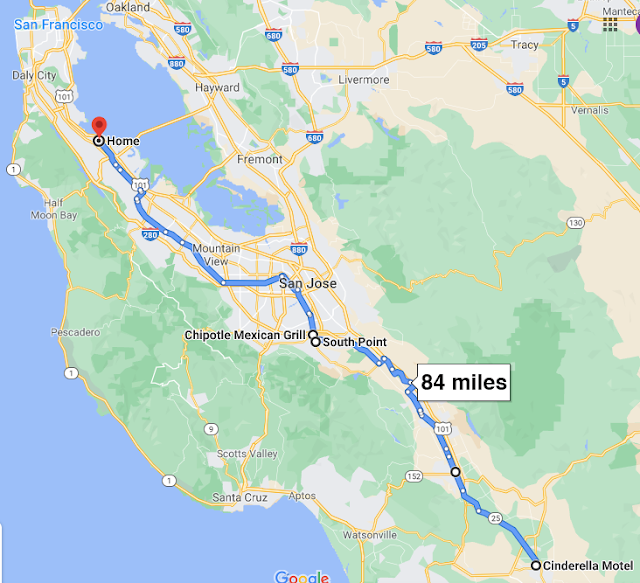 So, a great trip! I explored some new areas, saw some sweet birds, and overcame the usual cycling obstacles, most notably the scorching heat on Day 4. I originally estimated I'd ride about 320 miles across the six days, so I was spot on with the 324 which I ultimately amassed, albeit in only five days. And the bonus? I chased (and missed) the Golden Gate White-breasted Nuthatch the day after returning home, that 40-mile ride bringing my six-day total to 366. I'd not pounded those kinda miles since 2014, so it's nice to know my legs can still get it done. Oh, I also pushed my total county ticks to 1,548. That breaks down as follows: 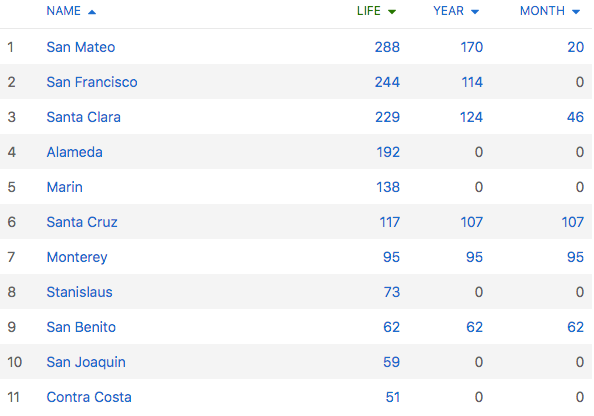 This latest undertaking will be my most ambitious riding for a while, but I'd like to make a five- or six-day loop through Marin > Sonoma > Napa > Solano > Contra Costa sometime in early-winter. I haven't done any bike-birding in Sonoma, Napa, and Solano, so that trip would probably net me 250 - 300 county ticks and get me that much closer to 2,000. But, for now, it'll be occasional day rides with some pelagic birding in between.
Whew. Hella Long. Later.
Posted by Dorian Anderson at 10:02 PM