With international travel shut down and domestic travel dissuaded in the COVID age, I've explored more of the Bay Area in 2020 than in previous years. Much of my wandering has been on my bike, but I have ventured farther afield in the car. I'd not, for example, birded in Solano County prior to March, and I've had fun exploring that southern end of that area in the intervening months. Lagoon Valley outside Vacaville has proven particularly productive (eBird hotspot), and I'm going to use this post to share a few photos I recently captured at the park. It's worth noting Lagoon Valley barely escaped the gigantic LNU Fire which roared through nearby Vacaville in August; the fire approached the park on two sides but ultimately spared it. 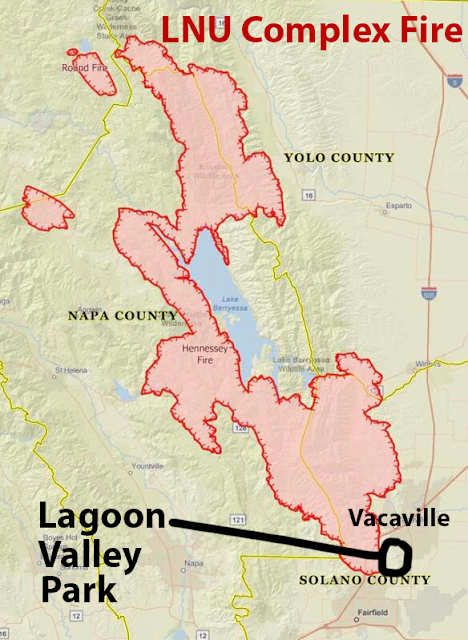 When I visited Lagoon Valley for the first time, on April 26th, the central lake was full of water and hosted a nice variety of waterfowl. It offered excellent birding but didn't strike me that it would be particularly good for photography (or at least no better than spots closer to home). Fast forward to September 8th; I returned to the park to find the lake almost empty, a giant mud puddle all that remained. A variety of shorebirds patrolled the shoreline, and I kicked myself for bringing the dog and leaving the camera. Birding with him isn't an issue, but I cannot do proper photography with him in tow.
The evaporated lake at Lagoon Valley.
The backing hillsides were incinerated by the LNU fire.

I thought the evaporated lakebed had so much photographic potential that I returned the following day, with camera and without Beagle. I always try to arrive at a shoot before sunrise because it allows me to ready my gear, survey the situation, and get into position ahead of the best light. Among Killdeer, Black-necked Stilts, Greater Yellowlegs, Long-billed Dowitchers, and Least Sandpipers, I decided to focus on a group of five Pectoral Sandpipers. It took a bit of cat and mouse, but my crawling earned the quintet's trust through the next 90 minutes.
I was shooting straight west -- as is best in the early morning -- and some thin forest fire smoke filtered the sun behind me to the east. Besides evening out the exposure and helping to preserved detail in the lightest parts of the subject, the smoke imparted the surroundings with some really unique colors. 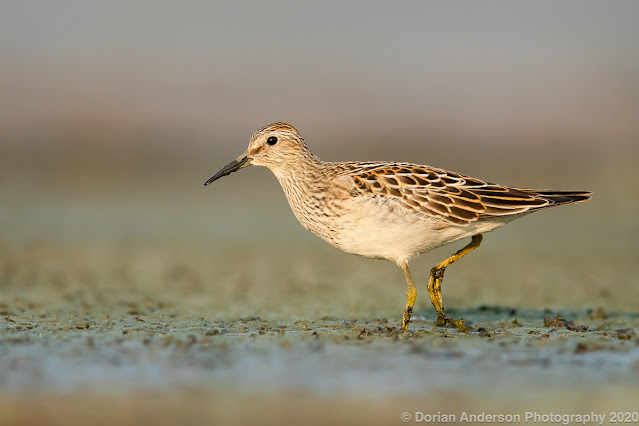 Without much action/behavior to motivate this next shot, I went with a wide crop to emphasize the pastel surroundings. I think the composition imparts the frame with a pensive feel, the bird pausing to contemplate his next move as I captured him. I love these small-in-frame-type images where I can use the camera to 'paint' the surroundings.
Pectoral Sandpiper - Calidris melanotos
Canon 600mm f/4 IS II + 1.4x III on EOS 1DX2
1/1600 at f/5.6, ISO 1600 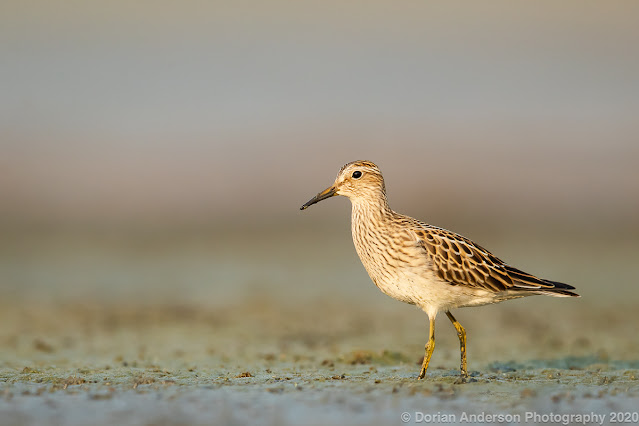 I wish I could see at least one foot in the next shot. The problem was that the birds wouldn't give me eye contact while they were feeding, so I had to settle for a static frame where the feet were obscured by mud. Without eye contact, the frame goes in the trash! 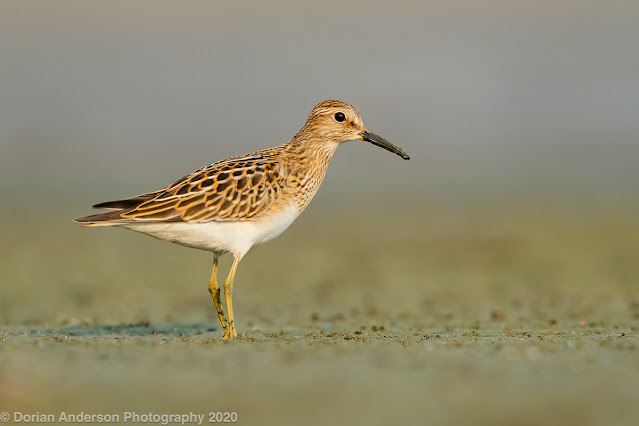 While I was pursuing the Pecs, this guy cruised through in the background. Thankfully, I was able to reposition for a clear shot! These lighting conditions were unlike anything I'd previously experienced. 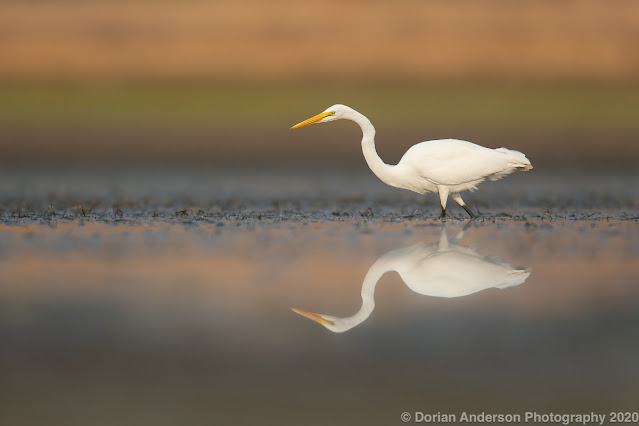 The adult Black-necked Stilts were very wary of me, but this juvenile was willing to come pretty close to me. I didn't notice the flies until I returned home and put the images into the computer - bonus!
Black-necked Stilt - Himantopus mexicanus
Canon 600mm f/4 IS II + 1.4x III on EOS 1DX2
1/2000 at f/5.6, ISO 1000 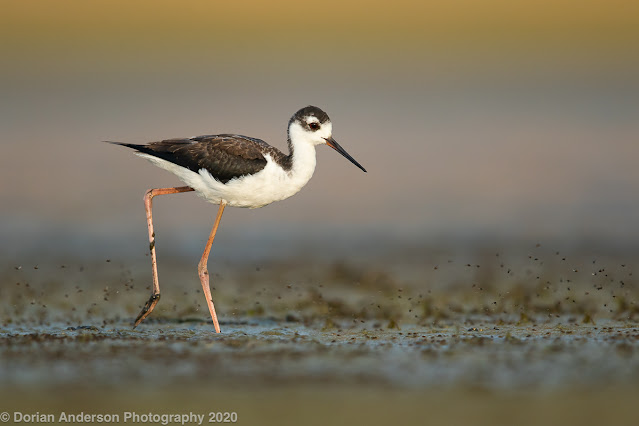 I did notice the flies in this last shot and did everything I could to get maximize their presence in the frame. I had to crawl into some hella nasty stuff, but I think I came out with a really unique shot.
Black-necked Stilt - Himantopus mexicanus
Canon 600mm f/4 IS II + 1.4x III on EOS 1DX2
1/2000 at f/5.6, ISO 800 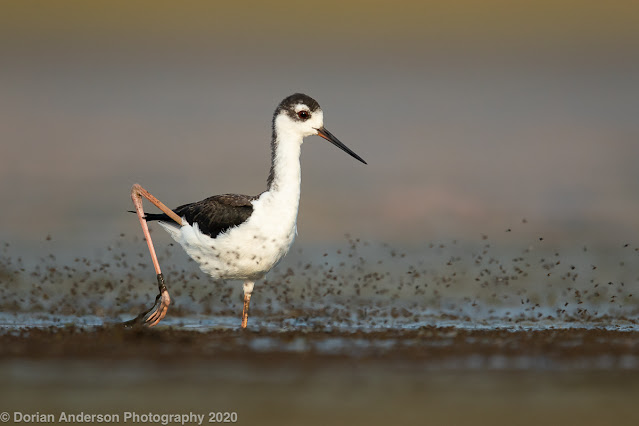 So yeah, this was a really productive morning of photography. I'm usually hoping to get one keeper frame per outing, so I was stoked to get these five and a few others. I'm hoping to make it back to Lagoon Valley sometime this fall. I'd particularly like to capture some Long-billed Dowitchers as that species is a weak spot in my shorebird collection at the moment.
The best part of Lagoon Valley?  There's a hose in the parking lot! I got some funny looks as I stripped down to my boxers and cleaned up, but it was totally worth it given these frames. Thanks to the kind soul who snapped this 'before' pic.....
Mud didn't smell as bad as it
looked. Nice and cool though.... 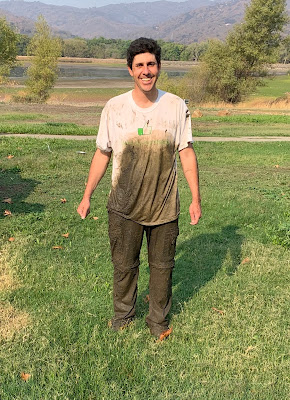 Posted by Dorian Anderson at 8:15 PM