Happy 2020! Glad you've returned for another year of The Speckled Hatchback, the blog's fifth! I'm sorry for the month since my last post, but I should be back on track after returning from Thailand, a wonderful country and fantastic birding destination which I will feature in future posts. For now, I'll stick to the Bay Area, but only after I mention three quick asides.

1) I have put together a gallery of my favorite photos from 2019 to match those from previous years. This years's collection features shots from CA, NY, AL, New Zealand, Colombia, and Thailand. Here's a preview.... 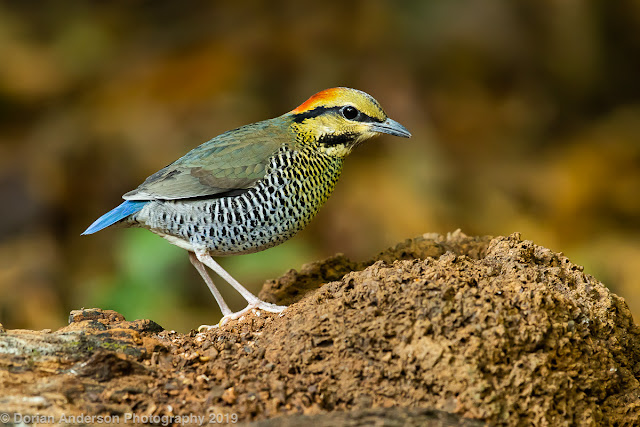 2) I would like to shine attention on John Patten Moss, the entertaining Georgia twenty-something who has recently embarked upon his unicycle Big Year from Washington State. His plan is super ambitious, and I encourage you to have a look his blog, updated weekly. I will post more about his CA route as he approaches The Golden State, and I am sure John would appreciate housing offers from those who can manage it. I'm hoping to intersect him at some point, and I'll be sure to offer a write-up of that anticipated rendezvous when it happens.


Photo from this article 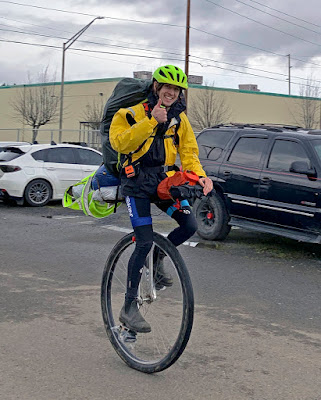 3) If you're mapping out your birding year, be advised there is still space on the Colombia birding extravaganza I'm running for Alvaro's Adventures. It will run June 20 to July 2, and - with two additional days this year - we should exceed the 375 species we found last year.

OK, on with the bike-birding show! As I finished 2019 with 299 species on my Bay Area bike list, I was curious to see what yet-unobserved species would surface as 2020 arrived. I missed some potentials while I was in Thailand - notably Scarlet Tanager at the SF Zoo - but Ken Moy's discovery of a usually-more-eastern Rose-breasted Grosbeak at the Botanical Gardens in Golden Gate Park on January 6th lent intrigue just as I returned. Exhaustion and responsibility prevented me from pursuing the bird immediately, but it stuck around until the 11th when I observed it in the same fruiting tree it had frequented for the previous six days. Though unable to obtain a photo during my brief encounter, I was hella stoked to achieve 300 species after pedaling nearly 5,000 bird-motivated miles since moving to the Bay Area in May of 2017. Granted, an amassed list of 300 birds isn't good for much, but it's been a ton of healthy fun exploring the Bay Area as I inched towards that plateau. I'm encouraged to explore more and farther afield, and I'm excited to discover what additional species will surface along the way!

My grosbeak pursuit. I also added Wrentit
in the Presidio for SF bike bird #191. 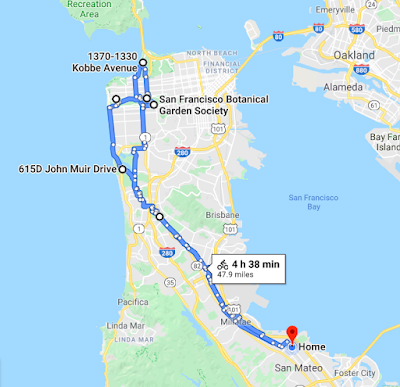 This seems the perfect occasion to remind everyone of the achievements of some other notable California bike-birders. Most impressive are Mark Kudrav and Jim Royer who've each observed 300+ bike-based species in California a single year, Jim with 318 in 2010 and Mark with 326 in 2013. Their's was remarkable dedication, and I am in awe of the efforts they put forth during their respective campaigns. They and folks like Josiah Clark, Rob Furrow, and Chris O'Connell are California bike-birding pioneers, and we are fortunate their examples have inspired so many, me included. I am particularly excited by the number of Bay Area birders who have more recently taken up the bicycle. I regularly intersect burgeoning bike-birder Joshua Stacey, and Chris Hayward and Malia DeFelice increasingly patrol the Half Moon Bay beachfront from rolling perches. Most exciting is seeing the younger generation of Oscar Moss and Jonah Benningfield wheeling around! 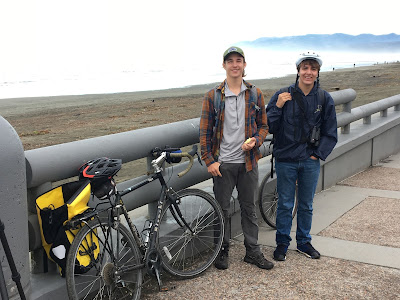 All of this is to say that California - and specifically the Bay Area - feels the nation's bike-birding capital at this moment. Climate, topography, bicycle infrastructure, and species diversity certainly encourage the pursuit, but it's ultimately up to adventurous individuals to seize on those facilitating circumstances. Bike-birders are still a small group, but I hope our ranks will continue to swell through 2020. It'll be great when John Patten Moss wheels through our state, so hopefully we can give him the welcome he deserves when he arrives! I'll try to keep everyone posted as that day approaches. Cheers!
Posted by Dorian Anderson at 7:27 PM