Post #170 - Photos of the San Francisco Rock Sandpiper. What is 'Image Design?'

I've always held shorebirds in high photographic regard (my collection here), but Rock Sandpiper, a North Pacific example, eluded my lens until this past week. A long-staying representative at Heron's Head in San Francisco glued to the terminus of the park's rocky peninsula for the past three weeks - the same individual I observed by bike on November 3rd and wrote about in my last entry - I decided a second, photographically-motivated visit in order. The bird was very tolerant of birding hoards earlier in the month, so I was optimistic I'd be able to capture some nice shots of the lingering rarity.

I had the end of the peninsula to myself when I arrived at 3pm on November 23rd, a brief search revealing the bird five feet from where I observed it during my first visit. I busted out my 600mm lens and began a leisurely game of cat-and-mouse with the subject sandpiper. It was as approachable as I'd hoped, and my lens quickly proved too much for a bird willing to wander with five feet of me. I swapped in my 100-400mm, that closer-focusing and more-maneuverable option proving a much better choice. 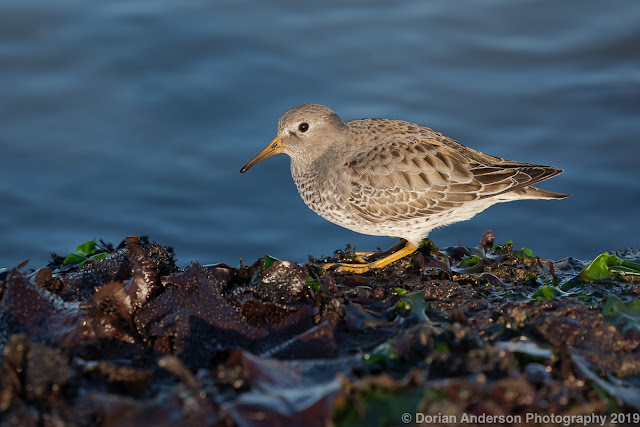 Obtaining a clean composition between rocks and shadows was challenging, but my patient, hour-long interaction yielded a couple choice opportunities. I avoided shooting the bird on the intermingled chunks of concrete because I don't want man-made objects contaminating my frames, and I thought the above example afforded and an accurate and attractive picture of the bird in its natural habitat. Importantly, I can see the bird's legs and feet amidst the seaweed, a critical consideration for my shorebird frames. I chose to use f/7.1 (versus wide-open and fastest f/5.6) to achieve a bit more depth-of-field across the seaweed. I didn't want to close down more - to f/8 or f/9 - because that would have compromised my ability to generate a smooth background, the water only a few feet behind the subject. 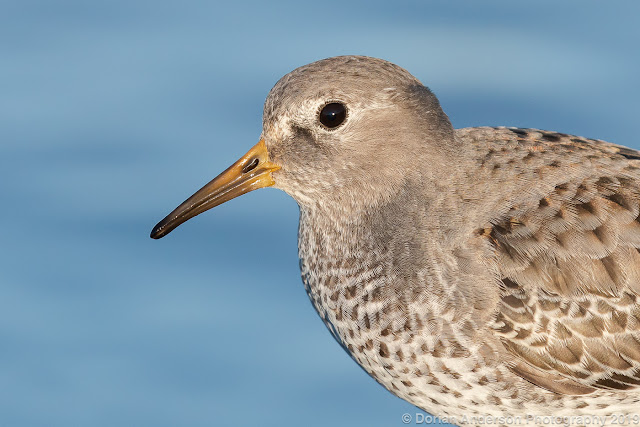 For this headshot, I crouched lower to shoot against more distant water; hence the more blurred background. I selected f/7.1 for this shot as well, but for different reasons than the first. In the full-body example, I wanted more depth-of-focus across the seaweed while in this I wanted more depth-of-focus across the bird, the focal plane compressing at this comparatively closer range. It would have been difficult/impossible to achieve critical feather detail on both the face and flank had I used a wider/faster aperture with less DoF.

With the two frames taken just moments apart and under identical lighting conditions, why did I use different shutter speeds at the same f/-stop and ISO? The exposure on the bird should be the same, right? Yes, but I selected the slower shutter (1/1000 versus 1/1600) in the first to get more detail on the comparatively darker seaweed. I could have raised the shadow/darks in the first in post-production had I used 1/1600, but that would have added noise to the lower half of the frame. Adding the extra light to get more detail on the seaweed meant I had to turn down the highlights on the comparatively lighter bird instead, but that is very easy to do in Lightroom and generally comes with little penalty in image quality (assuming the lights aren't completely saturated to start).

OK, enough. The point of all this is to take you through my thought process and highlight the importance of 'image design'. Good photographs don't just happen; they almost always result from creative conception, proper planning, and excellent execution. Having decent gear helps, but no camera is going yield a beautiful, high-contrast, color-saturated images in overhead sunlight, right? For this shoot, rubber boots and crappy pants were probably my most important gear! Proper photography, like hardcore birding, is a commitment!

OK, that's it for now. Hopefully it wasn't technical overload. Happy Thanksgiving either way.....
Posted by Dorian Anderson at 7:52 AM