The weekend of November 2nd and 3rd was epic bike-birding, my wheels put into eventual motion by the discovery of a Yellow-crowned Night-Heron (YCNH) on the Sausalito waterfront in Marin County on Monday, October 28. As the species hadn't been reported in the Bay Area during my two-and-a-half-year San Mateo tenure, I immediately consulted eBird for context, my investigation revealing only four records from the extended Bay Area and none since 2005. To put that into paucity into perspective, there are multiple Bay Area records of White Wagtail and Dusky Warbler since the last YCNH sighting. 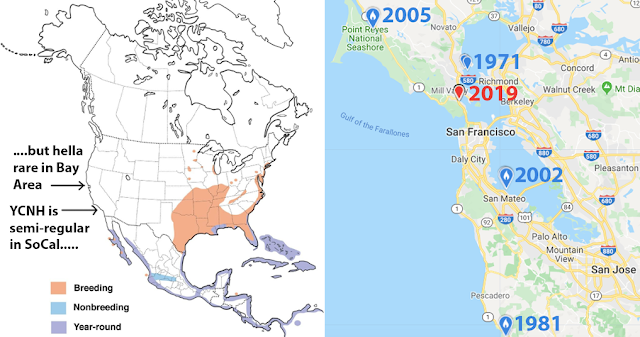 I didn't have time for the 65-mile round-trip YCNH chase during the week, but I watched eBird reports roll-in through the next few days, one noting, "residents say the bird has been here for years." That remark floating my hopes until Saturday, I set off at 1pm after leading a morning bird walk at Coyote Point. Lodging secured in Mill Valley, I'd have Saturday afternoon and most of Sunday to find the bird. The ride would be my first bike trip across the Golden Gate, so I'd enjoy initiating the Marin arm of my Bay Area bike list with or without inclusion of the sought YCNH. I'm going to place quick pause on YCNH for a second........

While my YCNH plans were crystalizing through the week, Richard Bradus found a Black-and-white Warbler (BAWW) in Alta Plaza in downtown San Francisco on Thursday, October 31. A follow-up  report on Friday suggested I swing through the park en route to Marin and the YCNH on Saturday, a decision rewarded when the high-contrast passerine revealed itself without ten minutes of delay. Like Chestnut-sided Warbler from the last post, BAWW is a common stray from the Eastern US, one I hadn't chased previously but knew I'd intersect eventually. 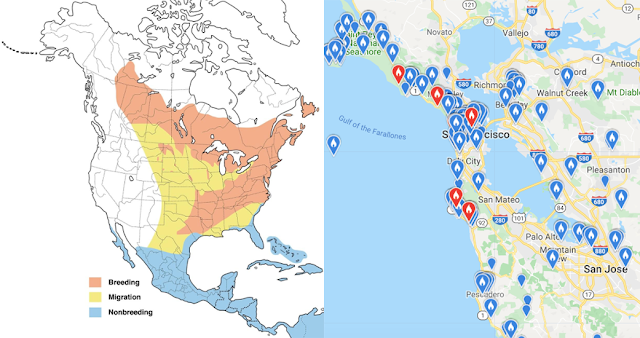 The bonus BAWW ticked, I rolled through the Presidio and across the Golden Gate Bridge. This was only my second time biking across the famous span, the first occurring on the San Francisco leg of my 2014 bicycle Big Year. Like that first crossing, my second was graced with blue skies and killer views! 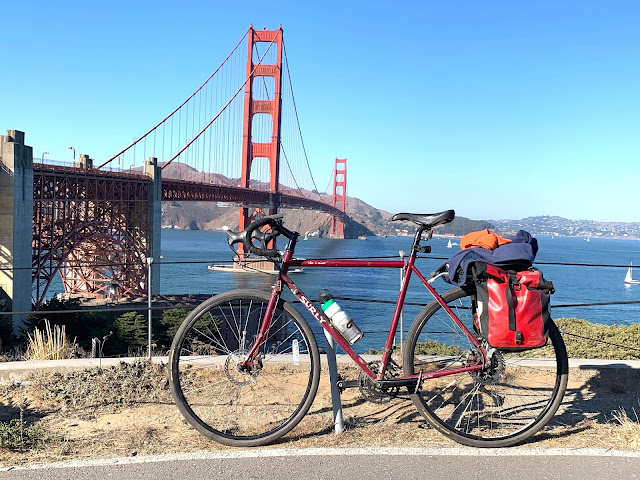 Touching down in Marin, I descended through Fort Baker, dodged tourists through Sausalito, and rolled into the waterfront community the YCNH had frequented since its discovery - and possibly longer if the quoted resident is correct. I hadn't dismounted my bike before spotting the heron standing on porch railing, the bird basking in the afternoon sun for the next half hour. I was joined by some other folks, and we enjoyed point blank views after the bird flew over the shoreline we occupied. After watching a ~10 year old girl walk with six feet of the bird, I totally buy the claim the bird has been around for a while. It literally couldn't care less about people. It's crazy to think this amazing bird lurked unreported (though not entirely undetected) for so long. It will be interesting to see how long it sticks around. Departing the heron, I spent the remaining 1.5 daylight hours exploring the Sausalito Shoreline, Bothin Marsh, and Bayfront Park before retiring to Mill Valley for the evening. 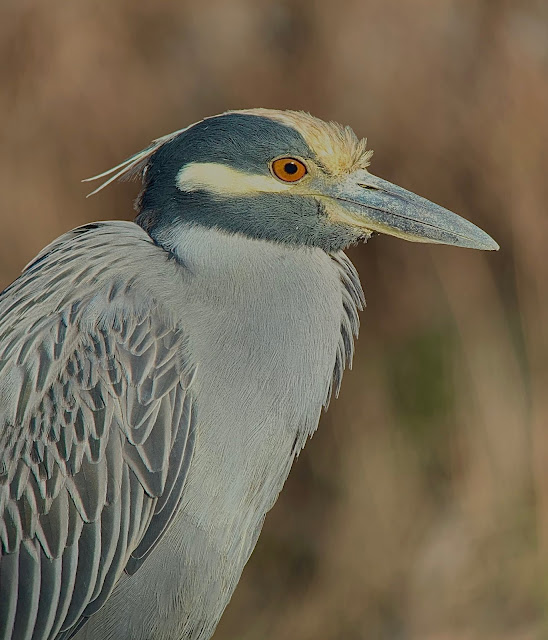 My plan for Sunday was to explore Tennessee Valley, Rodeo Lagoon, and the Marin Headlands before re-crossing the Golden Gate in the early afternoon, but a late-Saturday report of Rock Sandpiper (ROSA, found by Teresa Ely and Ben Dudek, 1st SF record) from Heron's Head Park in San Francisco demanded attention. A mostly-Alaskan species, ROSA reaches down the coasts of British Colombia, Washington, Oregon, and California in winter. The Bay Area represents the extreme southern end of that non-breeding range, and the species had not been recorded in the area since I moved here in May of 2017 (there was one Farallon bird in that time - and another last week). 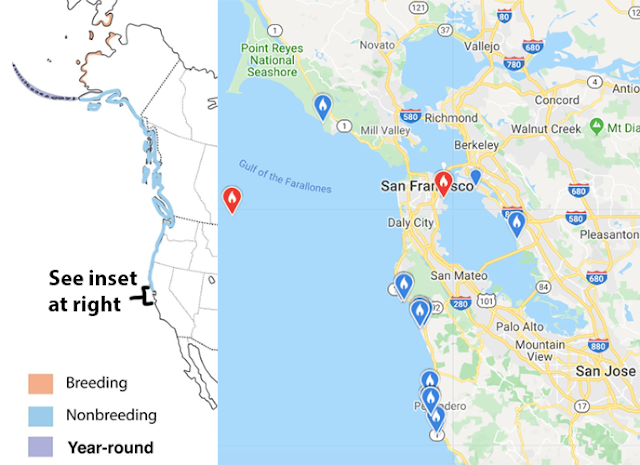 I decided I'd bird in Marin Sunday morning while I awaited news of the ROSA - I didn't want to quit Marin without knowing the sandpiper was present - but an early 6:30am confirmation sent me scampering towards the Golden Gate right at sunrise. Reaching the bridge at 7:10, I was informed both Golden Gate foot/bike paths would be closed until 10am because of a running race. As I was unwilling to utilize the courtesy bike shuttle to cross the bridge - gotta keep it 100% self-powered - I suddenly found myself with three hours to kill on the Marin side. Dropping to Rodeo Lagoon, I enjoyed beautiful and productive coastal birding while I awaited the 10am opening, all the while hoping the ROSA stayed put. 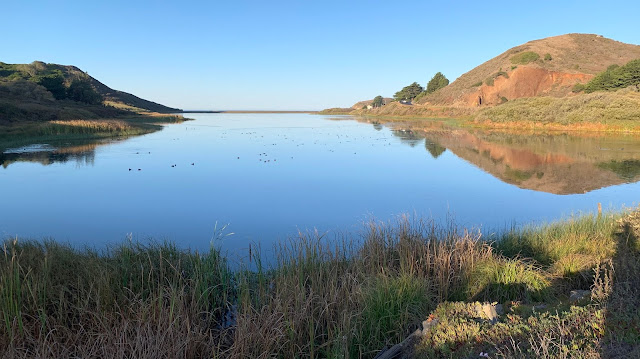 With my time at Rodeo, I was able to run my virgin Marin County bike list to 81 species. (I saw ~140 on a Marin County bike Big Day with Josiah Clark and others in April, but I had to drive from San Mateo for that event, a circumstance rendering those birds excluded from my fully-green Bay Area biking project.)

The bridge finally opened, I fought through traffic lights and fended-off weekend drivers to reach Heron's Head at 11am. There wasn't much drama, the ROSA sleeping at peninsula's terminus as half-a-dozen birders gazed onto it. This was only my second encounter with the species, my first on the Humboldt Jetty in January 2011, and it was fun to observe this individual at such close range. The bird spend most of its time resting, but I had a few quick full body views as waves occasionally forced the bird to reposition itself. The close views were a great cap on an awesome weekend on the bicycle.


The end of Heron's Head Park. Bird was on
shoreline directly over my handlebars. 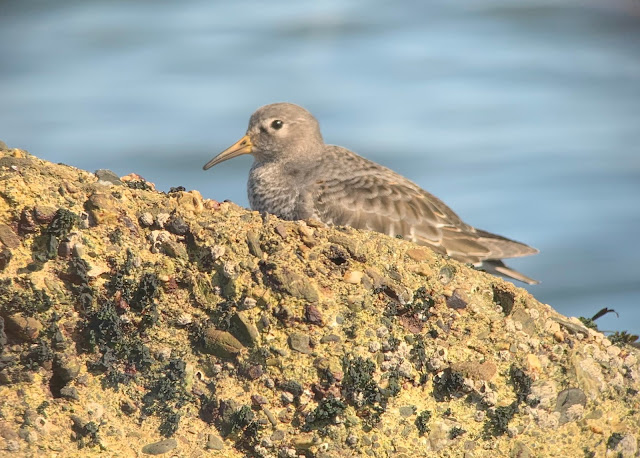 
~80 miles with doubling back and screwing around 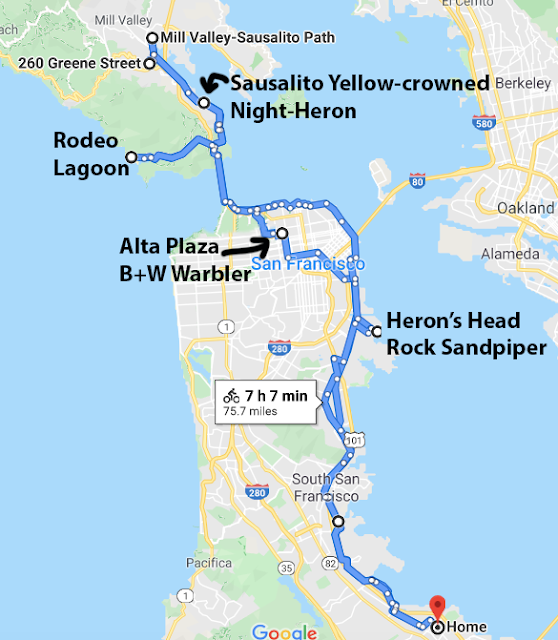 Those birds leave me three species shy of 300. Upcoming travel will probably delay reaching that plateau into the New Year, but it will be a great feeling when it does finally happen. I'm amazed I've been able to find (and by find I mean 'chase') enough new birds to generate blog content through the summer and fall. I'll have to get more creative as new birds become fewer and farther between. Cheers!
Posted by Dorian Anderson at 12:10 PM