Post #105 - The return of the bicycle and an intro to bike-birding!

Woo hoo! After two and half year hiatus from bike-birding, I today hit the trail for the first time since the conclusion of my 2014 Biking for Birds Big Year project! A number of different factors combined to keep me on the sidelines during that time, the most notable of which was the urban sprawl of Los Angeles where my wife and I lived for the past 2 years. Now that we've moved to Northern California and are comfortably settled right near the San Francisco Bayshore, I plan on doing a lot more bike-birding in the near future. Things will be a bit slow through the summer but will really heat up during fall migration. Winter will be dynamite as hundreds of thousands of waterfowl and shorebirds spend the cooler months in SF Bay and nearby Pacific Coast. I'm really looking forward to it!

My new backyard. Those trees dead center
are Coyote Point Park. There's a bike path
basically as far as you can see (in either direction). 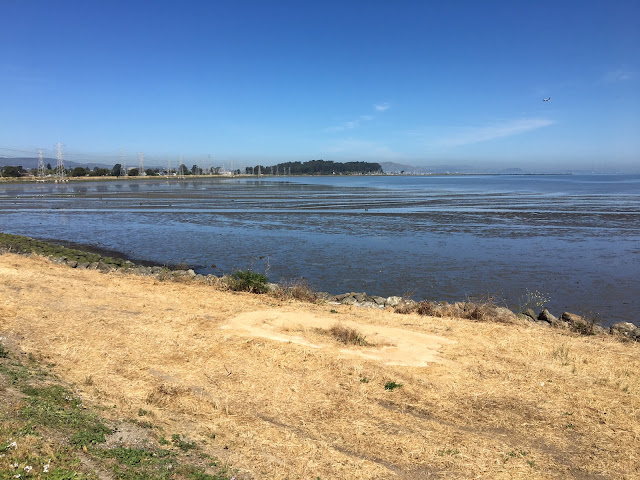 So, what the heck is this bike-birding thing all about anyway? Well, the general idea is to minimize one's petroleum consumption and more general environmental impact by doing one's birding using the bicycle as the primary mode of transportation. Bike-birding is often referred to as "green birding" because it doesn't generate any carbon emissions beyond the baseline metabolism of the participant. Green birding as a term also includes walking, kayaking, and other similarly self-powered endeavors such as running and canoeing, but the bicycle is generally the featured mode of transportation as it allows a lot of ground to be covered.


Yesterday's route. I really have to ease back into
this as I am just getting over a severely strained
left calf muscle. I will use the park for start/end
since I don't want a pin at my home. 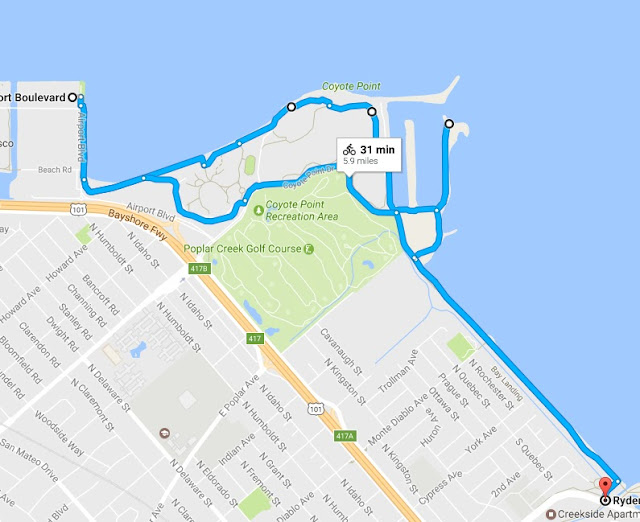 Terminology and minimal environmental impact aside, bike-birding is an incredibly fun and healthy way to interact with birds and the environments they inhabit. Bicycles allow a window to the natural world that cars simply cannot match as it's possible to see, hear, and smell things from the bicycle that would be completely missed from a car. Granted it's possible to cover much more ground in a car than on a bike, but the riding experience - at least on nice days - more than makes up for the distance shortfall. Plus, its super healthy. Now you can go ahead and have that extra scoop of double fudge peanut butter moose tracks ice cream!


The highest pint to which I biked during
my 2014 bike-birding odyssey. That ride
was worth about a gallon of ice cream. 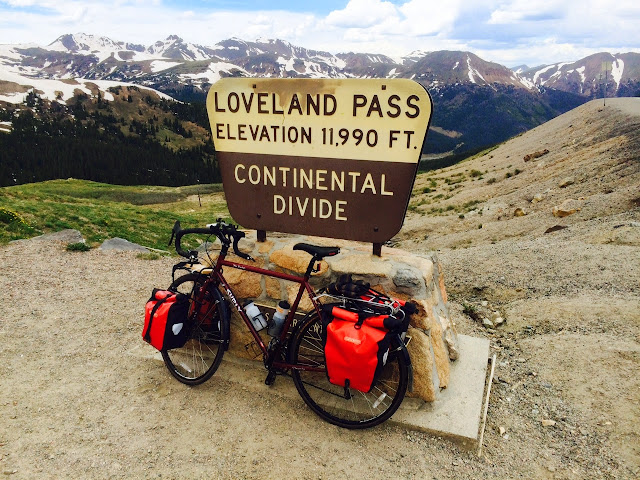 Here I can add a personal note and say from personal experience that when a person bike-birds, it really feels as though the ticked species have been earned. That's not to say species collected with motorized transport don't matter or count, but it feels really different on the bike. I'll still be doing much birding and photography with motorized transportation (more on this at the end), but I am going to do what everyday, local birding I can with my bike. I also fully understand that many people are simply not in the physical condition to make bike-birding a regular thing. Biking is also a much larger assumed physical risk than is driving, so someone with 3 small kids might opt for the car not only for convenience but also for the future well-being his family. So, there's no judgement from me on how anyone birds. I do, however, think think that those who bike-bird should be offered a friendly pat on the back for the efforts they are making.


One from my short ride yesterday. Nice and light
compared to what I carried on my Big Year! 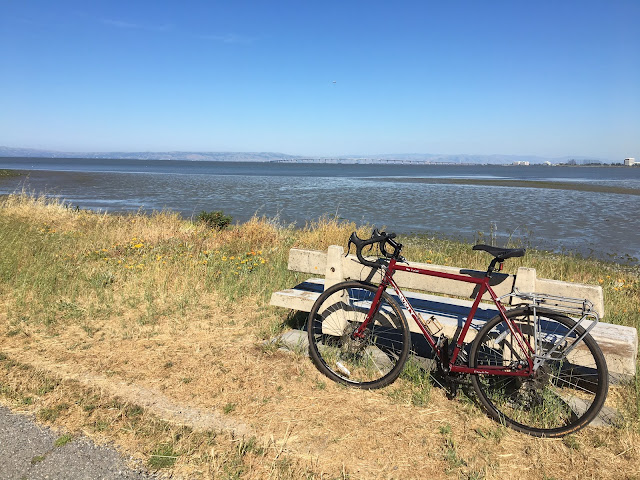 I should probably here mention a few of the broadest rules/conventions of the bike-biding game, at least as they pertain to anything official. I don't yet think the ABA or other organization has set in stone any set of bike-birding rules/guidelines, so take what I write here just as general suggestions.

1) Generally, to be considered officially 'green', a day of bike-birding should start and end at the same place, usually a person's residence. That means that I will on almost every occasion be doing "out-and-back" type trips from my San Mateo apartment. If there's a sweet bird in Half Moon Bay, I've got to bike the 20 miles there AND the same miles back. None of this one way on the bike, one way in a car stuff!

2) The exceptions to the above are Big Days and Big Years where participants are free to pick the starting and ending points to their transects. As long as the bike-birder doesn't use motorized transport between those points, then everything is cool. This exception exists so that birders in less birdy areas aren't put at an immediate disadvantage. For example, the ABA bike Big Day record will almost always come from either Texas in spring or California in spring; A birder in Maine who wants to take a crack at that record should be free to fly to Texas or California for his/her effort. Likewise, if bike Big Years had to start and end in the same spot, anyone at northern latitudes would be royally screwed since they'd need to fight snow and ice twice, once at in Jan/Feb and again in Nov/Dec. Those in the sun belt live much closer to more prime birding spots and shouldn't automatically be afforded that advantage compared to their northern counterparts.

3) Ferries and other form of motorized assistance are not permitted at any point, Big Days and Big Years included. Technically, a rider can have a vehicle offer assistance as long as he still does the riding with all his gear. For example, if someone wants to cross particularly dangerous bridge on a bike Big Day, having a motorized escort (with flashing lights and such) over the bridge so as to stay safe is totally cool. 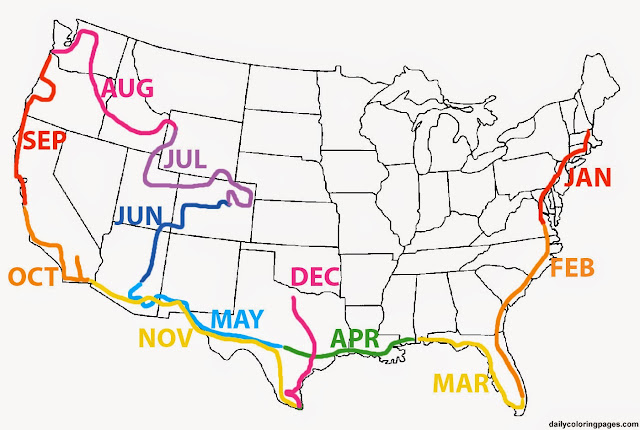 I'm sure I've missed a bunch of stuff but I just wanted to mention these most major guidelines. All of this is admittedly a bit silly as bike-birding accounts for such a small fraction of the total amount of birding done in the world. Even within bike-birders, there's only a select few of us who care about these particulars. The most important thing is that people give bike-birding a try. It need not be serious or competitive to be enjoyed!

I do also want to add a note about how my photographic interest will conflict with my bike-birding interest. To state it simply, the two are not even remotely compatible, even less so than are petroleum-based birding and proper bird photography. I shoot the 2-3 hours after sunrise, and the 2-3 hours before sunset - and that's it. The light is just too harsh/steep to make good photos during the rest of the day - at least at my latitude. I am not looking to bike several hours in the dark with gear that costs more than a car to reach a shooting location by sunrise. As I am trying to build a bit of a business around my photography, I need results from it, and those just aren't going to come from a bicycle. The pattern that is therefore likely to emerge in the next few months is that I will bike-bird on cloudy days and drive to shoot on sunny days. So, that will explain why you see my using both a car and a bicycle moving forward!

For any bike-birders reading this, I'd love to hear from you in the comments section. No specific information sought, just whatever is on your mind. Comments have been down recently so I'd really love to hear from anyone!

Ok, that's it for now. I will be providing all sorts of chronicles of my bike-birding adventures as they unfold, so please stayed tuned. Don't worry though, those bike-birding adventures won't completely take over the blog as I'll still be bringing you the more general sort of birding content that I've provided in the past, photographs included. Here's one from before my move since I shorted you on birds shots today! 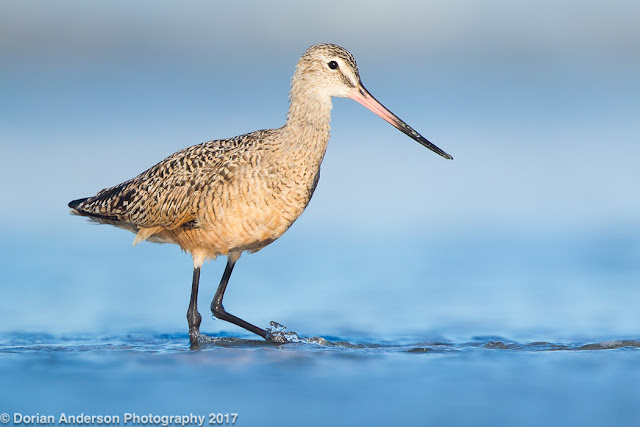 Posted by Dorian Anderson at 9:21 AM