Southern California pelagics have a lot going for them. Pleasant weather and calm seas usually combine to make an enjoyable day on the water, and great distances need not be covered to reach decently productive waters. In summer, Black-vented Shearwater, Pink-footed Shearwater, and Black Storm-petrel are in great supply, and rarities such as Least Storm-petrel, Craveri's Murrelet, Guadalupe Murrelet, Blue-footed Booby, Red-footed Booby, Red-billed Tropicbird, and the newly split Townsend's Storm-petrel can appear at any time. Brown Booby, though once rare in SoCal, is virtually guaranteed on any San Diego or Orange County trip, so if you still need that bird for your ABA list, a SoCal pelagic should be in your future.

All that said, I've now taken 6 SoCal pelagics - 2 from San Diego, 2 from Dana Point in Orange County, and 2 from Oxnard in Ventura County - and have yet to be blown away by any of them. Now don't get me wrong, I had a really nice time on each trip, but they have collectively lacked the excitement that has surrounded my equal number of pelagic trips from Monterey or Hatteras. The biggest difference, as I perceive it, is the volume of birds, or, more specifically, the lack of it. While I have at times been astounded by the number of pelagic birds at other offshore destinations, I have never felt that way in SoCal. There are usually a few shearwaters and storm-petrels buzzing about, but there are equally often painfully prolonged periods (i.e multiple hours) when few - if any - species beyond gulls and terns are observed. I'm not so much writing about diversity as I am total pelagic individuals. As an avid photographer, I'm stoked to shoot even the common stuff, but here in SoCal what birds are around generally don't come close enough to the boast for what I'd consider proper photography. Why I've managed nice pelagic photos everywhere but SoCal is as baffling as it is frustrating. 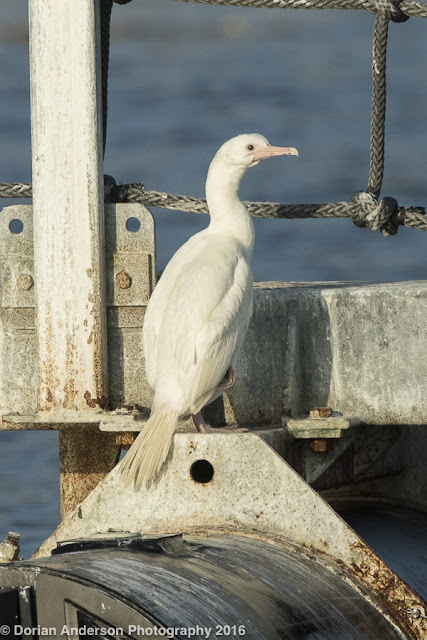 What keeps me coming back to SoCal pelagics are the well-run trips, the on-board camaraderie, the always pleasant conditions, and the ever present chance that a home-run rarity will appear. As a fairly unabashed ABA lister (well, the lower 48 at least since I haven't done Alaska - yet), I do want to add to my ABA list what pelagic species I can during my time here in SoCal. I figure that if I take a ton of SoCal pelagics, I'll see all the usual stuff plus a few rarities along the way. Many of the trips will be underwhelming, but I'll still see more than not going at all. This is why I say I have a love-hate relationship with SoCal pelagics; There is so much potential, but I know I'm going to have to take a lot of trips, many of them very slow, to find the rare birds that I want to see.


Master of Ceremonies Dave Povey let's us know what's up! 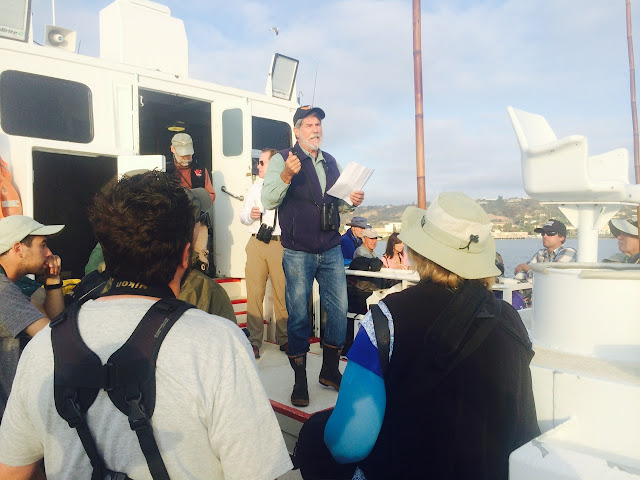 This past weekend I hopped aboard a trip of San Diego. I took the same trip last year, but missed my two target birds, Least Storm-Petrel and Craveri's Murrelet. I redeemed the storm-petrel in Monterey a month later, but the murrelet was still outstanding by the time our boat departed. That changed relatively quickly as we promptly found a number of Craveri's on the 9-Mile Bank. The first few pairs we so distant and the looks so poor that they did not meet my own "countable" threshold. However, with patience, we eventually got close enough to one pair for decent looks and record photos. We could even hear the two birds calling back and forth to one another. It was a really nice encounter and saved what was an otherwise slow trip. We had decent looks at the usual birds and a nice study of Leach's (Chapman's) Storm-petrels. This trip was a full 12 hours on the water and only cost $100. It was a really good value. Dave Povey and friends run a great ship; They have my full endorsement and will certainly have my patronage well into the future. 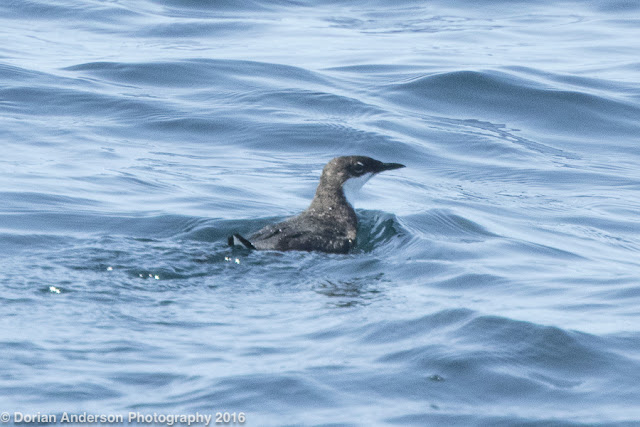 http://www.socalbirding.com - This is the place for information on all San Diego trips. Discounts are given for advanced sign-ups, so look into the trips ahead of time.

http://www.seaandsageaudubon.org/FieldTrips/Trips/Pelagic/PelagicTrips.html -  Orange County's Sea and Sage Audubon Society runs 4 trips a year from Dana Point. Mainly geared towards OC listers, they do find some great birds, Red-footed Booby, Craveri's Murrelet, and Red-billed Tropicbird included. These might be the best value in the history of pelagic birding at $60 for the 8-hour trip. I generally take a few of these trips each year since they're so convenient for me.

http://www.bajawhale.com/wildlife-tours/pelagic-birding-tours/ - This is info on the famous 5-day "Searcher" pelagic trips. While I have not done this trip myself, I would imagine it is best for well-seasoned seabirders. These trips are expensive ($1300), but will give a person unparalleled access to SoCal's pelagic birds. All sorts of crazy stuff has been found on these trips (Pterodroma petrels included), so literally anything is possible.

http://islandpackers.com/ - This outfit runs trip to the Channel Islands, most notable Santa Cruz Island where every ABA lister must go at some point if he/she want to collect Island Scrub Jay. I took a combo pelagic and scrub jay trip with Island Packers back in February (you can read about that trip here) that was quite good.

OK, that's it for now. Hopefully someone finds at least some of this helpful or informative!
Posted by Dorian Anderson at 10:26 PM