Wow, what a week in Arizona! Our time in the Grand Canyon State was simply amazing! We spent 2 days in the Santa Ritas before passing the remaining 5 in the Huachucas, Hereford, and Sierra Vista where I was the keynote speaker at the Southwest Wings Birding and Nature Festival. Though on the smaller side (~140 people, I think), the festival was jam packed with field trips, lectures, and community outreach. It was a very well-run affair and highly recommended for those looking for an introduction to birding in Southeastern Arizona (SEAZ). Incidently, SW Wings also runs a spring festival. Spring is generally better for nesting specialties, particularly nightbirds, while late summer features more hummingbirds and rarities. You really can't go wrong in SEAZ anytime between late-April and early-September, so don't delay if you're thinking about a visit! 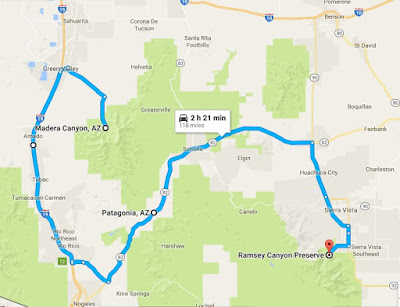 It is worth noting that July and August are monsoon season in the desert southwest; Clouds generally gather through the morning before dumping accumulated moisture as precipitation sometime in the afternoon. Cloudbursts can be heavy but rarely last very long. In that respect it's a bit like being in the tropics. As such, the rain usually doesn't disrupt birding terribly. Instead, the rain cools things down and induces a nice burst of late-day bird activity.

Unusually, we experienced quite a bit of sustained rain during the first four days of our trip. We managed to get in at least some birding between downpours. The most notable bird for me was my ABA lifer Plain-capped Starthroat (ABA seen species #710) at the Santa Rita lodge in Madera Canyon. The continuing Tufted Flycatcher in the Huachucas, however, eluded me. It was completely absent on the 4 days on which I searched for it but reappeared the day that we returned to LA. #$%^&*!!! That's the way it goes, right? Showing Sonia her lifer Spotted Owl and Elegant Trogon surely softened the blow of that painful miss. As for other animals, we found Black Bear, Black-tailed Rattlesnake, Bobcat, Coyote, Coati, and the usual assortment of jack-rabbits and such. 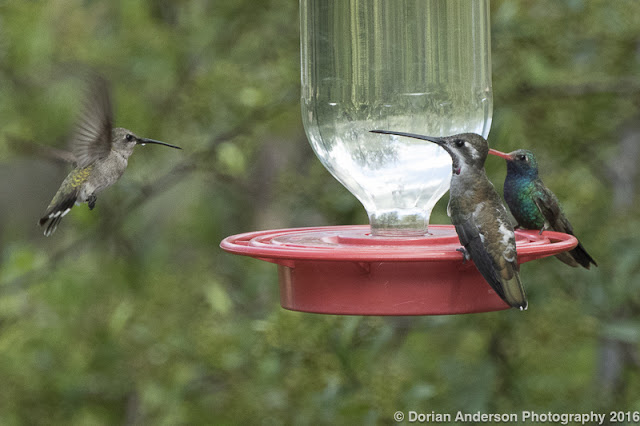 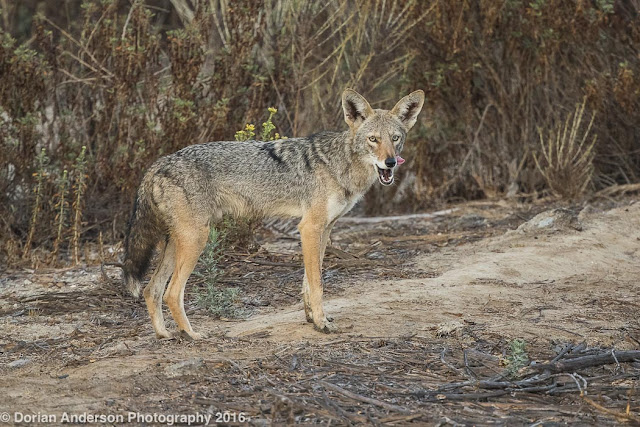 iPhone record shot of Black-tailed Rattlesnake on the road.
These are very docile and often permit quite close approach. 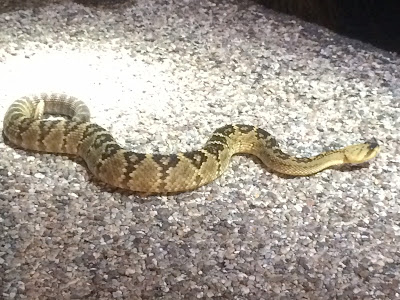 A friendlier boa of some sort at the festival's
vendor, art, and educational fair 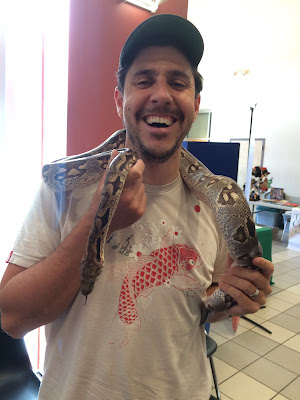 OK, with that I would like to propose what I think is the worst name for any North American bird. There are quite a few odd or awful names out there (American Black Duck - it's not even black, Hepatic Tanager - liver colored tanager?!?) but Broad-billed Hummingbird does one of our most beautiful birds simply zero justice. I have no idea from where this oh-so-boring name came. Internet searches revealed some suggestions, but none really made much sense to me. Blue-chested Hummingbird, Sapphire-chested Emerald, Fiery-billed Emerald, or Red-billed Gemstone would all be better monikers for this Central American species that reaches Southeastern Arizona in summer. I mean, c'mon, Broad-billed Humingbird? For real?!?!?! If anyone has other names that drives him/her crazy, I'd love to hear your thoughts via comments or emails. 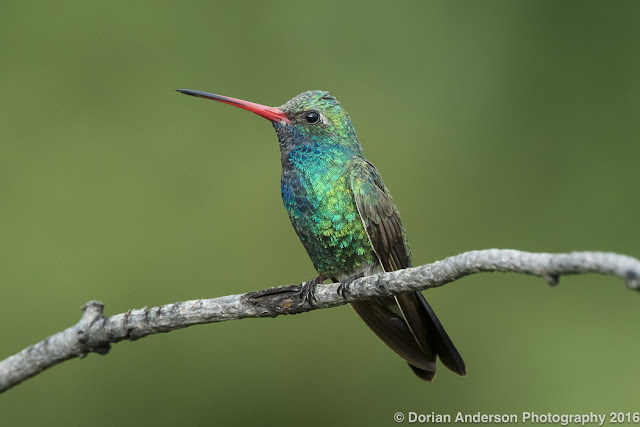 Anyway, that's my two cents for this post. There will certainly be more from AZ in the next few days, so please stay tuned!
Posted by Dorian Anderson at 9:47 PM

Email ThisBlogThis!Share to TwitterShare to FacebookShare to Pinterest
Labels: US birding