I had planned to spend yet more time writing today, but my friend Tom today managed to twist my arm into taking a ride with him and his wife, Ann.  We had been talking about birding Shawangunk Grasslands NWR in Ulster County at some point this winter. This is a traditional winter spot for Rough-legged hawks and Short-eared owls. These species are seen on a near-daily basis at this location. I saw both of these species during my last midwinter visit 3 years ago. What motivated the trip on this particular day was a Gyrfalcon that had been reported in the area for each of the last 2 days. We figured we would take a ride to look for the hawk and the owl, and if the falcon materialized for us, then it would be a nice bonus.

Shawangunk grasslands NWR are a now defunct army airport that the grasses have reclaimed. Managed by the US Fish and Wildlife service, this ~565 acre area is the summer home to Eastern Meadowlarks, Bobolinks, and Grasshopper sparrows. In winter, the habitat can hold dozens of raptors. A refuge volunteer told us that he has recently observed upwards of a dozen Short-eared owls hunting over the area a one time! As we approached the refuge, Tom nearly drove off the road as he shouted "Gyrfalcon!". The bird had rifled right over the car and quickly disappeared over a wooded patch and hill to the left side of the car. Only Tom saw it, and he hypothesized, based on our geography, that it was heading for the area from which it has been reported the last two days. We decided to leisurely bird our way in that general direction.

Our first stop at the refuge proper yielded 3 Rough-legged hawks (2 light, 1 dark) and 3 Red-tailed hawks. All the birds were perched in trees right along the edge of the grasslands. We gave the area a few scans, before deciding that we should head down to the Blue Chip Farms area where the bird has been seen. As this spot was only a mile down the road from the grasslands, we figured we could bounce back and forth between the two areas depending on that the birds at each were doing.

As soon as we arrived at the farms, we saw a guy with a large lens looking at something on the right hand side of the road. I immediately saw the Gyrfalcon perched in a pine tree relatively close to the road. We piled out of the car for incredible looks at the bird. I was not optimistic about the prospects of finding, let along photographing this bird. I was caught unprepared and I had to quickly assemble my camera. I managed to do this just as the bird lifted off from the pine tree. My camera was in manual mode from a midweek walk over to Central Park, so I had to go into complete scramble mode to get the settings right. I normally take a series of test shots to establish the correct exposure before worrying about composition. I managed to do both in one quick hit today, and I walked away with two marginal shots. These are VERY heavy crops. I am normally hope to keep at least 1/3 (33%) of the frame, and this is at the extremely low end. Greater than 1/2 (50%) normally produces the best results. Given the scarcity of this bird anywhere, particularly in the Lower 48, I am happy with these results. Light was obviously terrible!

Gyrfalcon (cropped to 7% of original frame) 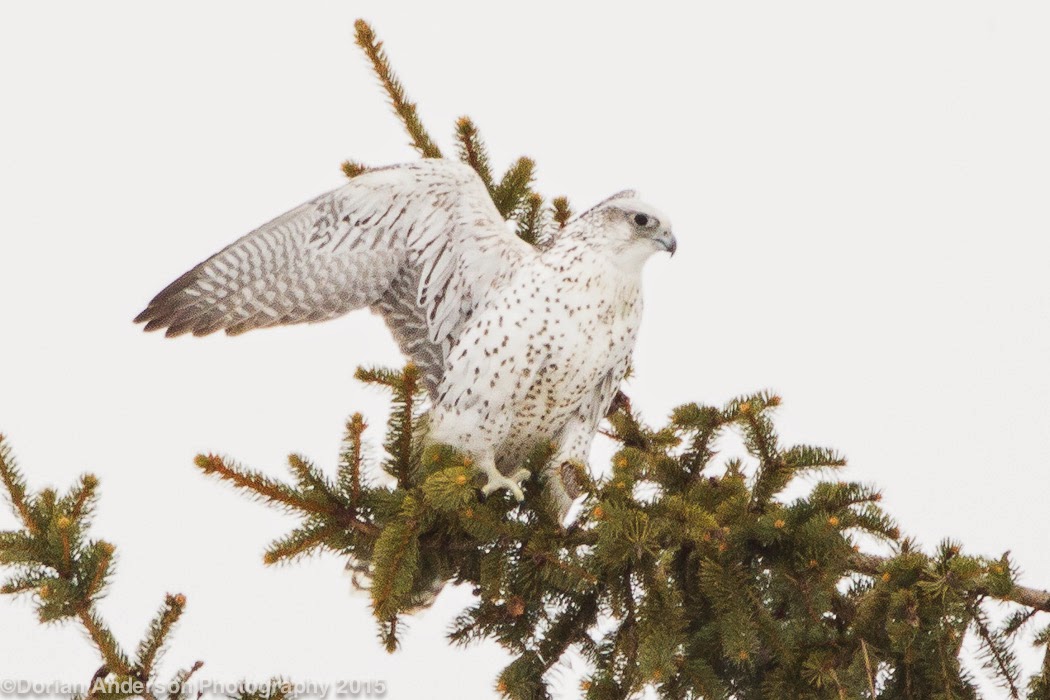 Gyrfalcon (cropped to 18% of original frame) 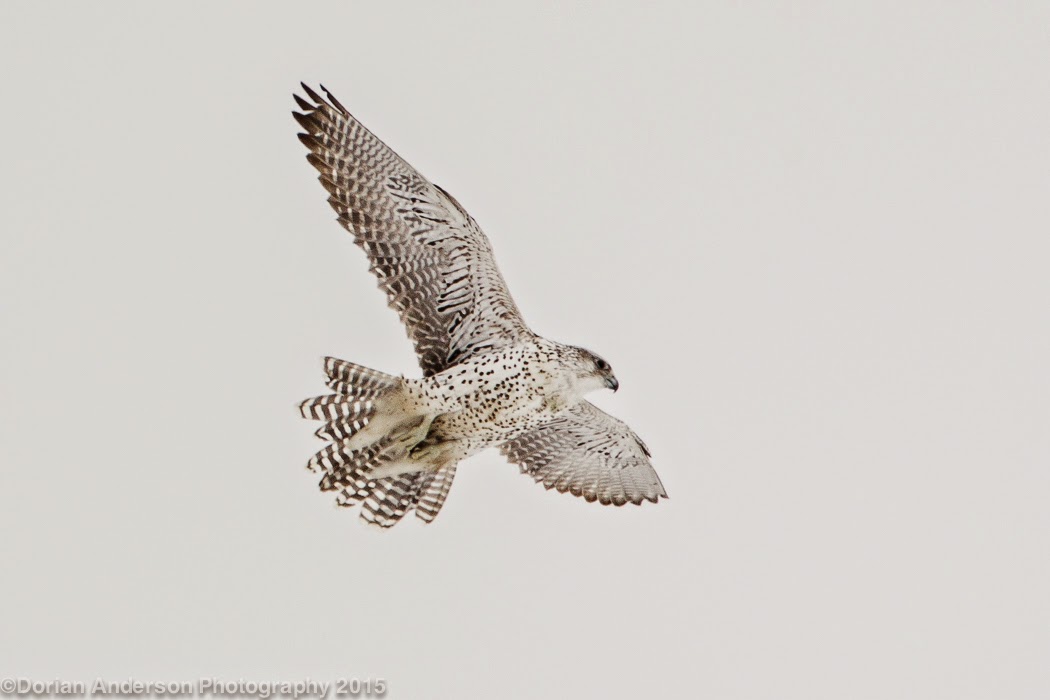 Scattered birders quickly coalesced. After lifting off from the roadside pine tree, the bird cic=rcle the field one before landing in a leafless deciduous tree at the back of the field. Here is sat, roughly 200 yards back from the road, for the next hour. Dozens of birders from surrounding states (NY, NJ, CT) had nice scope views of the huge white bird as he relaxed and preened. We left the bird after aout 50 minutes to head back to the grasslands to look for Short-eared owls. We managed to find 2, although distant, to complete the target bird hat trick for the day. As snow was moving in, we turned tail, closed up shop, and headed back to the city.

Gyrfalcon stared in pine on left, then flew to and perched in
trees all the way at the back of the field. 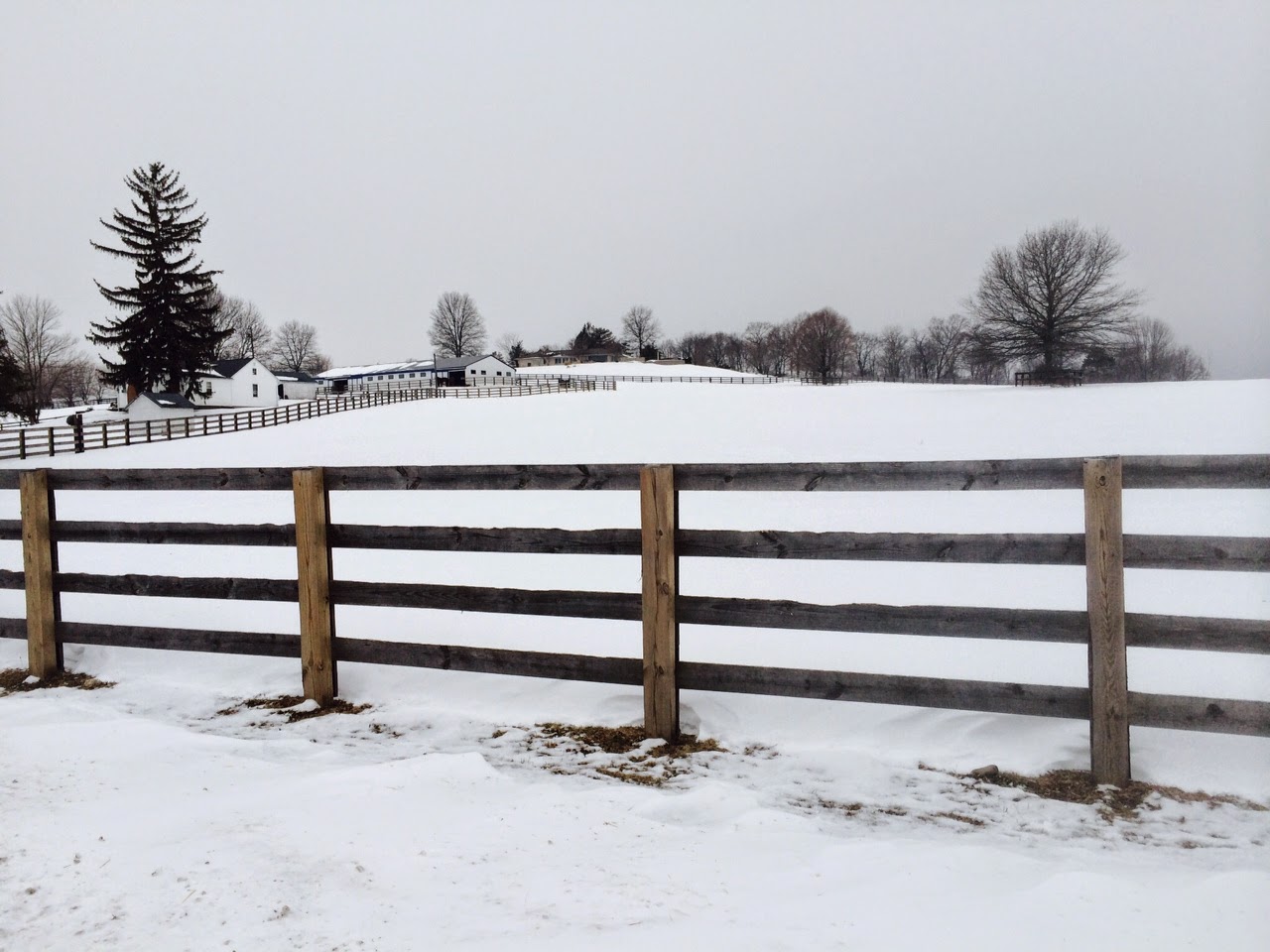 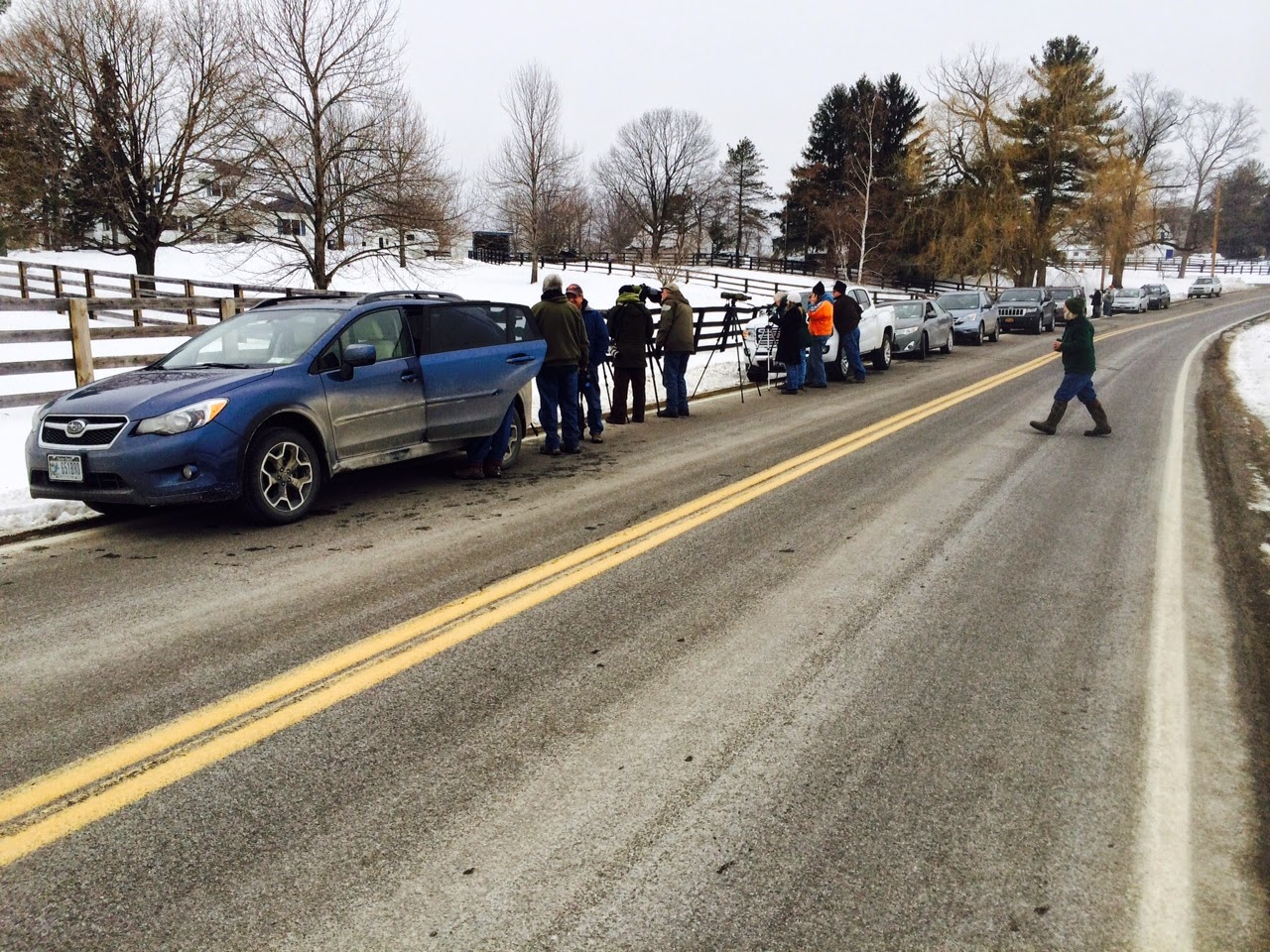 I have seen Gyrfalcon on only 1 other occasion. That bird spent part of the winter of 2001-2002 in downtown Boston. I was able to observe that bird at its favorite downtown haunt, the Boston Design Center right alongside the cruise ship terminal. The large population of gulls around the harbor apparently kept that bird well fed for weeks!
Posted by Dorian Anderson at 7:12 PM