I initially wrote at the end of my last post that this post would focus on the Tandayapa Valley. The problem with that plan was that I didn't realize how much I had to say about Reserva Yanacocha. So, I am going to fill this post with Yanacocha information and save the Tandayapa stuff for the next installment. A visit to Yanacocha couples very well with a drive along the famous Nono-Mindo Road (also called Ecoruta Paseo del Quinde) to reach Tandayapa, and I'll show at the end of the post exactly how you can do that. But for now, let's focus on Yanacocha. 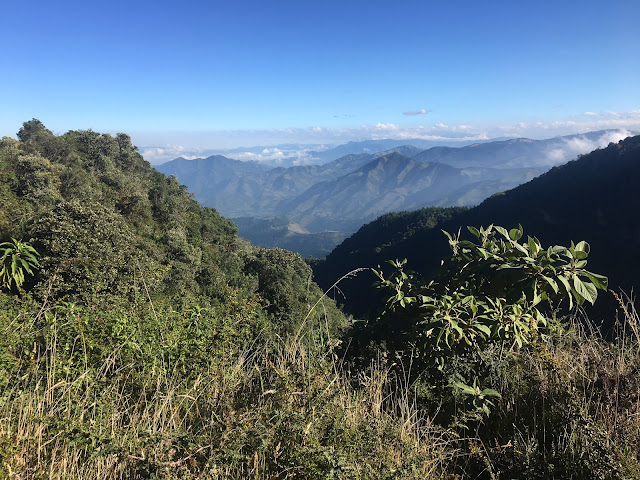 Getting to Reserva Yanacocha
Reserva Yanacocha is administered by the non-profit NGP Jocotoco Foundation and is located at over 11,000 feet of elevation in the mountains on the western side of Quito (a city itself at ~9,300 feet). The map below shows that the reserve is 75-90 minutes from the Quito Airport. As it is so close to Quito, Yanacocha makes an ideal stop as you transit into or out of the city. There is no lodge at the reserve, nor is there anywhere notable to stay terrible nearby. There is one "lodge" on the west side of Quito, but my communication with it/them was so atrocious I don't want to point anyone in that direction. Your best lodging bet is probably to spend the night before your visit in Quito and head up to Yanacocha in the morning (more on this in a bit).

Reaching the reserve can be a bit challenging, particularly as the directions that the almost-always-reliable Google kicked out for us were quite wrong. It is therefore important that you have dictated or written directions ahead of time. The directions - taken verbatim from the reserve website linked above - are:

"The reserve is accessed via the old Nono-Mindo road, also known as the 'Ecoruta Paseo del Quinde', which begins by exiting the Avenida Occidental in the Mena del Hierro area of Quito. After 10km on this road, there is a sign for the Reserva Yanacocha Jocotoco where you will turn to the left. After 8km along this dirt and cobble road, you pass through a fenced facility of the Quito water company (Empresa de Aqua Potable del Quito EPMAPS). After passing through this facility, continue on 2 kilometers to reach the reserve entrance."

Those instructions are correct but do need a bit of clarification. The referenced, signed left hand turn (just across the street from a community soccer field) is a bit deceptive as you turn onto a cobblestone road so narrow and steep that it looks more a personal driveway that any sort of through-road. Never fear, just keep going up the very steep, bottom cobble section and the road will within a kilometer turn to dirt and level off a bit. You'll be going through grazing pastures at that stage. When you reach the water facility there is often a guard/official in the little hut. He might pop his head out and ask where you're going. Just tell him 'Reserva Yanacocha" and he'll let you through. At least that's what we did; It was painless. The road is passable in a regular car but was very rutted and bouncy even in an SUV. 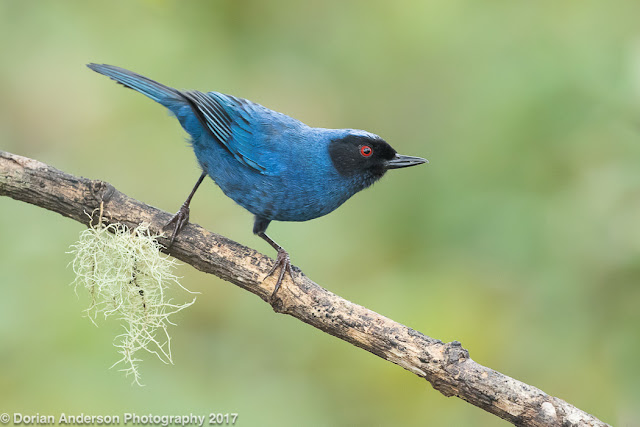 The reserve is open from 7:00am to 3:30pm. Admission is $15/person (bring cash, exact change appreciated). There are restrooms and a small shop that sells coffee and snacks. I would strongly suggest arriving right as the reserve opens. This will accomplish 3 goals. First, if there is going to be sun, it's going to be in the morning as Yanacocha tends to cloud up over the course of the day. Once it clouds up, there's not much of view. Second, arriving early will give you more time for your $15. Lastly, a morning visit to Yanacocha couples very well with an afternoon drive down the Nono-Mindo Road to reach the Tandayapa Valley later in the day (see below). 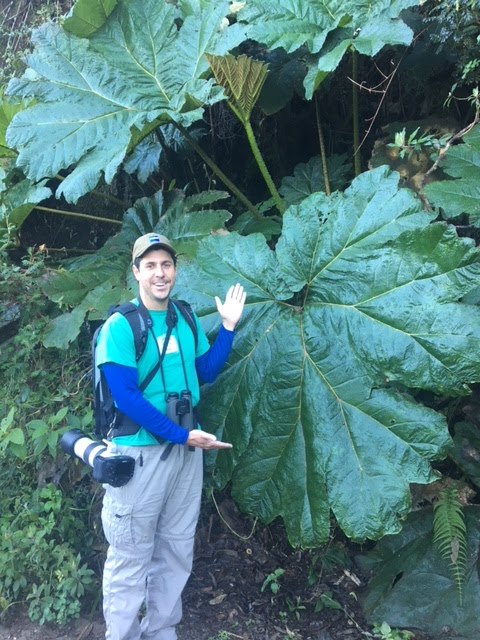 Birding the reserve
Yanacocha is high altitude birding at its finest. Over 220 species have been eBirded from the site, and it is really the hummingbirds that make it special. There is one feeding station right at the main entrance, and there is a second maybe a mile to a mile-and-a-half along the very well-maintained dirt road/trail that leads clearly away from the parking area. Among the sought species are the stunning Golden-breasted and Sapphire-vented Pufflegs, the bright orange Shining Sunbeam, the unbelievable Sword-billed Hummingbird, the gigantic Great Sapphirewing, and the critically endangered and very range-restricted Black-breasted Puffleg (only rarely seen). Other notable birds include Andean Condor, Giant Conebill, Imperial Snipe, and several species of antpittas. We liked Yanacocha so much that we visited on 2 consecutive days, an afternoon and the following morning. 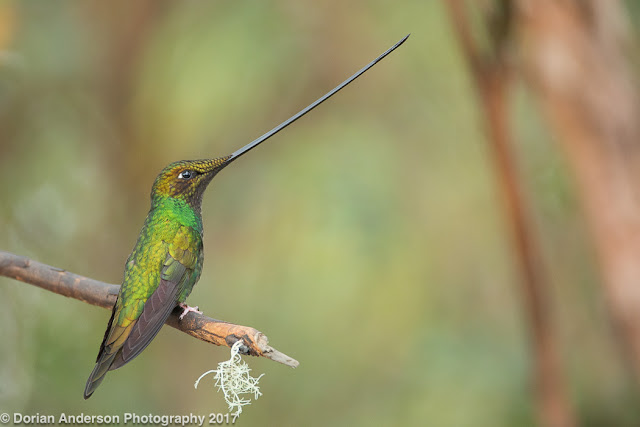 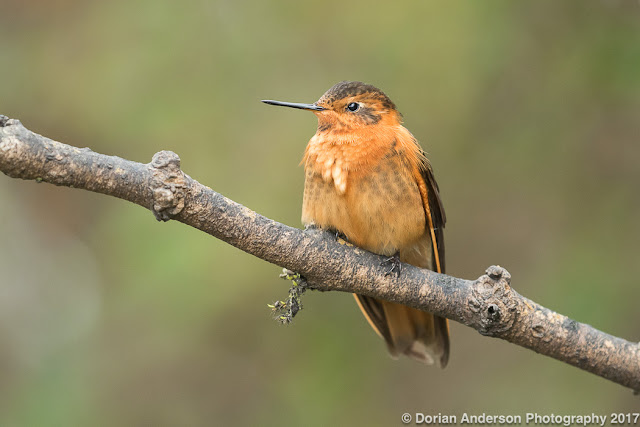 Other high-elevation birds we saw included Andean Guan, Buff-winged Starfrontlet, Scarlet-bellied Mountain-Tanager, and Hooded Mountain-Tanager. But we hardly dented what the reserve offers in our two visits. I can't imagine what you could find if you spent a whole day walking the various trails, particularly if you hired a local guide (we did not). I didn't know a single call, so everything on these eBird checklists represents a seen species. I always get sucked into photographing so my personal birdlist is never as high as someone who focuses exclusively on birding.

There were very few people at the reserve on either of our visits, and I doubt if the place ever gets truly crowded. We did run into another birding group on our second visit, the Benningfield family from my home Bay Area. I've actually run into kids Jonah and Max birding around the bay, so it was really funny to bump into them so far from home! 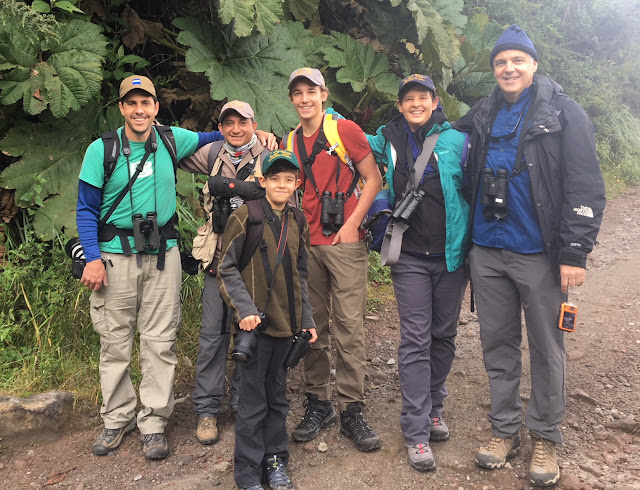 If you visit Yanacocha, it is then very easy to drop back down and rejoin the paved, main road west towards Nono. From there, you'll turn onto the unpaved Nono-Mindo Road for 25km to reach Tandayapa at the center of the Tandayapa Valley. What's really interesting is that if you drive that route, you'll drop from 11,500' at Yanacocha to 9,300' in Nono to 5,500' in Tandayapa. If you make birding stops the length of that drive, the species will change markedly as you drop.

What I would suggest is using your first full day in the country either entirely at Yanacocha or split between a morning at Yanacocha and then an afternoon descent along the Nono-Mindo Road to reach Tandayapa (or Mindo, if you feel like continuing) by late afternoon. There's absolutely nothing between Nono and Tandayapa: It won't take much gas to make that run since it's all downhill, but the other, uphill way (Tandayapa > Nono > Yanacocha) will require much more gas so do be aware of that. Also, take snacks if you're going take your time on that route. 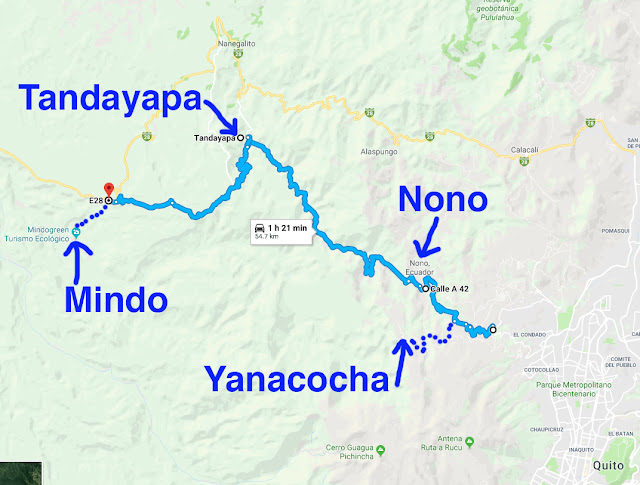 OK, I think that's it for now! Next up - Tandayapa Valley, for real this time!
Posted by Dorian Anderson at 8:54 PM