Wow! That's all that I can say after returning from 8 days of travel, birding, and photography in Taiwan. I was there as a representative of Alvaro's Adventures, the eco-tour company for which I will be leading birding and bird photography excursions in the upcoming years. So, if you like what I here write and you are interested in taking a tour of Taiwan to experience it for yourself, please get in touch with me. I'll be designing an itinerary in the next few months, so please stayed tuned!

OK, it has been a while since I did a travel right-up, so I'd like to refresh your memory as to how I generally do this. I like to split my foreign birding experiences into two (and sometimes more) posts, the first to talk a bit about the country and birding logistics and the second (or the rest) to write more about the specific birding sites I visited and the birds that I saw. You can click this link or the "International Birding" tab under the banner heading to see my write-ups from previous trips. With that approach in mind, I'll get started. 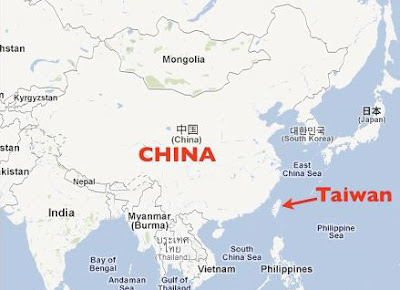 Taiwan is also known as the Republic of China (ROC), not to be confused with the People's Republic of China (PRC), the country we traditionally call China. The two countries have a very interesting and often contentious history, so knowing even a tiny bit about it will help visitors understand the contemporary relationship between the two entities. As briefly as possible, when Mao and his communists took control of China in the Revolution of 1949, the deposed government of Chiang Kai-shek retreated to the the Chinese island of Taiwan (110 miles off the coast of Southeastern China) where it continued to function until Chiang's death in 1975. Since then, Taiwan has evolved into a fully independent and democratic entity; It is, for all intents and purposes, now its own country. China still lays territorial claim to Taiwan, and it is from that history that the "One China Policy" has emerged, a policy that treats Taiwan as part of China rather than as an independent country. At present, only 19 members of the United Nations formally recognize Taiwan as independent; All others, the United States included, deny an independent Taiwan, mainly for fear of offending the economic powerhouse that is mainland China. It is all done with a *wink-wink* but, to me, seems a bit insulting given what a wonderful place I discovered Taiwan to be.

So, Taiwan is similar to China in some ways while being completely distinct in others, and the birdlife on the island nation suggests exactly this. With a very manageable ~650 cumulative species on its birdlist, Taiwan shares much of its avifauna with China and the rest of Asia. However with 27 endemic species and a host of endemic races that are likely at some point to be recognized as full species, Taiwan possesses birdlife that is distinct from anywhere else on planet earth. Importantly, and unlike either mainland China or the rest of continental Asia, Taiwan can be thoroughly explored and birded in just 10-14 days. Taiwan is therefore the perfect introduction to Asian birding. It's similar enough to the rest of Asia that what is there learned can be applied on future Asian excursions but different enough that it's worth making a dedicated trip to experience it. Taiwan also provides a wonderfully immersive Asian cultural experience for those who want to experience more than the country's birds.

Taiwan topography (left) and population density (right).
Everyone lives in the western lowlands. 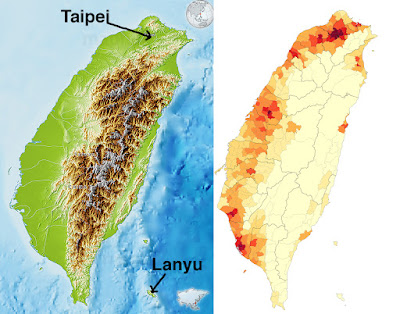 Looking at the maps above, it's easy to see that Taiwan's ~23 million people are tightly clustered along the flat, western edge of the 250-mile long island (comparable in area to the state Maryland or the country Montenegro). While those lowlands provide productive birding, particularly for migrants and waterbirds, the endemics almost universally prefer elevated areas, anywhere from 200-3500 meters. What I found particularly surprising was just how mountainous Taiwan is; On my trip we reached well over 10,000 feet, but the highest point in the country is Jade Mountain at 12,966 feet!

Sunset high above the clouds in
Taiwan's central mountains. 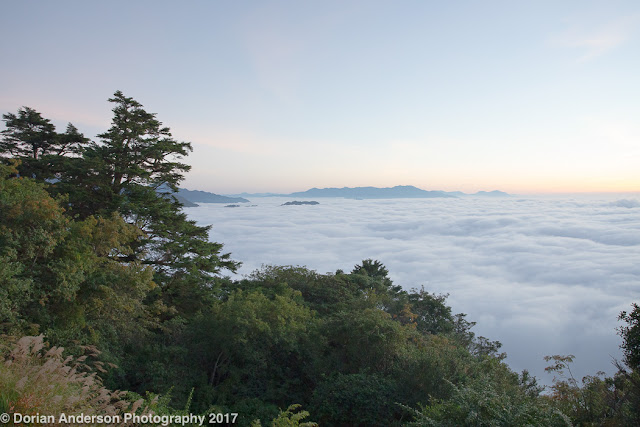 Any birding trip to Taiwan should prioritize the endemics as most of the other interesting species can be filled in around them. Places like Dasyueshan Nation Forest, Hehuanshan National Forest, and the elevated areas above Chiayi City, in Alishan Township, are particularly productive for endemics. With visits to those places and few others in between, my group was able to find 26 of Taiwan's 27 endemics (Taiwan Bush-Warbler the lone hold-out). And that was in just 8 days. The only endemic that requires extra travel is Styan's Bulbul, a bird that resides exclusively at the southern end of the country. We made that long trek but those visitors not hellbent on collecting every possible endemic might consider spending more time in other areas closer to the arrival/departure point of Taipei. If one wants to visit Lanyu/Orchid Island off the southern end of the country (see map below), then a visit to Kenting at the southern end will be required. Lanyu is most worth visiting in the spring when migrants abound but should generally be skipped at other seasons. 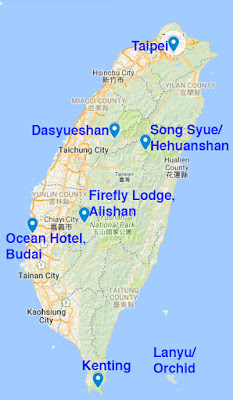 An interesting cultural note is that birdwatching in Taiwan is much more synonymous with bird photography than it is in the Unites States. In fact, many serious Taiwanese birders pack 500mm or 600m camera lenses instead of binoculars or spotting scopes. That there isn't much seawatching to be done in Taiwan explains some of this but a general Asian cultural affinity for photography and the gear associated therewith undoubtedly makes at least an equal contribution to the skew. This video from the first day of my trip nicely illustrates this difference. This particular hubbub was caused by the appearance of a group of Yellow-bellied Tits, a usually mainland species that has only been found in Taiwan a handful of times. At no rare bird would cameras so heavily outpace traditional birding optics in the United States or Europe. Irrespective, the video does nicely show that birders in Taiwan are as fanatical as are those in the US.

OK, getting back to more serious birding business, it's worth noting that Taiwan's endemics are completely non-migratory (they wouldn't be endemic if the migrated off the island nation, right?). As such, they can be reliably found at any time of the year. In speaking with locals, it seems as though spring (late April into early May) is the most popular time to visit as it is then possible to see lingering Asian/Siberian winter migrants and returning, migratory breeders in addition to those endemics. Spring has the most birds but also the most rain, so do keep that in mind. Summer is the slowest season, but the action picks up again in the fall as migrants return from more northerly latitudes. Many species winter in Taiwan, so those cooler months are good birding as well. However, I have been strongly advised to AVOID THE TIME AROUND CHINESE NEW YEAR as it is a complete chaos during that time (late January into early February, depending on the lunar cycle). For reference, my very quick, driving-heavy, 8-day trip accumulated 160 species with only minimal time on the coast. Birdlists from spring trips of 10-12 days will be significantly closer to 200 species, the most successful exceeding that threshold.

Otherwise, I'll say that Taiwan is a very safe and friendly place. Even with the language barrier, people are generally patient enough that I could communicate with them with hand gestures and sufficient time. Roads can be a bit hair-raising but are in great physical shape; I don't recall hitting a pothole the entire trip. Taiwan is a fully industrialized, first-world economy, and such prices for food and services are understandably more expensive than in other, less developed parts of Asia. However, prices seemed to me still significantly cheaper than what I would expect to pay for comps in the US or Europe. Most lodge-type accommodations seem to run $80-$130/nights. A four- or five-star hotel in the cities will run between $200-$300, very generally.

I flew the Taiwanese EVA Airlines direct from San Francisco (13 hours). It was very easy and had great in-flight service. I think that United is the only US airline that services Taiwan, but any number of Asian airlines will get you there as well (though often with long connections in Japan, the Philippines, China, or Korea). It's also worth noting that a full day is lost going to Taiwan as the International Dateline is crossed mid-Pacific; I left at midnight on Sunday and landed t 5:30am Monday morning. Returning 8 days later, I left on Monday at 7:50pm and landed in San Francisco at 3:50pm, 4 hours before I took off! So, keep that in mind when planning your travel. I have no idea about car rental as my group was shepherded around with a van/driver provided by the tourism ministry.

OK, I know that's a lot of information, but hopefully it gives you a good idea of the history, geography, and logistics of Taiwan. In my next post I'll be focusing exclusively on birds, so do please check back next week for all of that information. I have lots of nice photos as well, so I think you'll enjoy those. Here's a fun one to whet your interest. It's a Collared Scops-Owl roosting in the rafters of an ancient temple. He perfectly represents the birding-cultural intersection that one can expect in Taiwan! 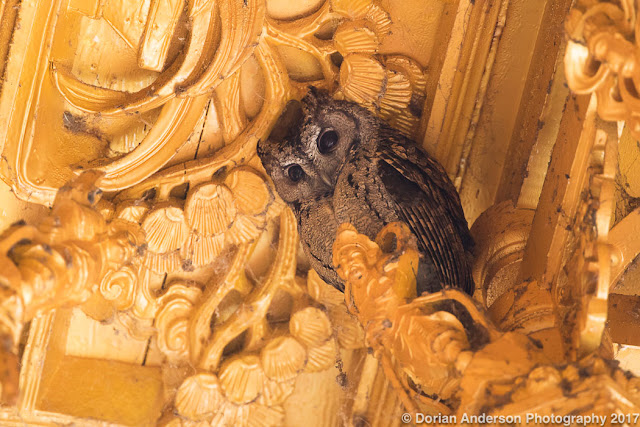 Posted by Dorian Anderson at 9:35 AM