Yee haw!!! Greetings from Texas! Well sort of. I am actually back in LA after spending Wednesday through Saturday of last week in Southern Texas at the Laredo Birding Festival (LBF). This was only my second true birding festival, but boy was it a good one! The little brother of the much larger and well-known Lower Rio Grande Valley Birding Festival (LRGVBF), the LBF provides an equally good opportunity for participants to view many of the South Texas specialty birds including kingfishers, orioles, flycatchers, and jays. This year, the LBF was limited to 110 participants, almost all of which stayed at the fantastic La Posada Hotel. This made for a very intimate experience as field trips included a maximum of just 10 participants. I presented a lecture on the second night of the event, and I functioned as a birding guide for each of the three days. In short, I had a blast. The weather was perfect, the birds plentiful, White-collared Seedeaters generally cooperative, and the attendees enthusiastic. For those folks thinking about a trip to Texas, the LBF might be the perfect opportunity when it rolls around again next February! 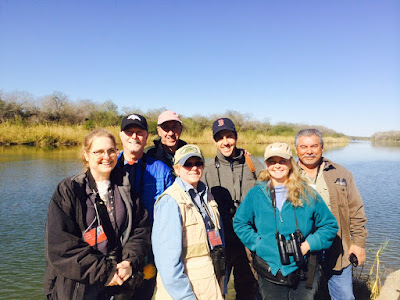 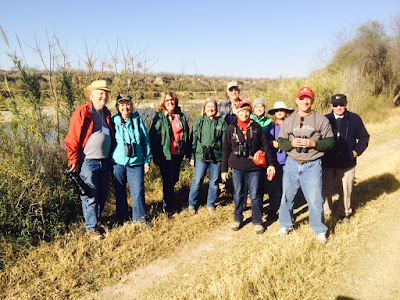 Here is the log book from Salineno. I last visited Nov. 24, 2014
during my bicycle Big Year in 2014!  It is organized by state, hence
everyone on this page was from MA. This time I signed the CA page. 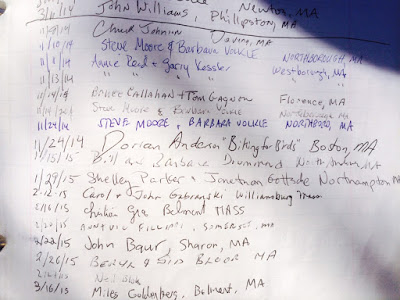 One interesting fact about Texas is that only 2-4% of the total land area (depending on who you ask) is held by the state or federal government. Stated another way, roughly 97% of the land in Texas is privately owned. This means that it is critical for conservation entities to liaise with local landowners if anything is to be accomplished. The LBF itself works closely with local ranchers to secure access  to private land that is otherwise restricted, and it is this access that really makes the festival special. Much of the land I birded is open only during the festival, and I felt quite privileged to have been able to bird many of the amazing ranches surrounding Laredo. Several of the cooperating ranchers even attended the closing dinner on Satuday night. Beyond the incredible company and birding, I think the LBF serves as a model for how birding entities should interact with the communities in which they operate.

Closing dinner. I was the "churro assassin", consuming
at least 8 of the sugary treats on top of an equally absurd
number of tostadas. 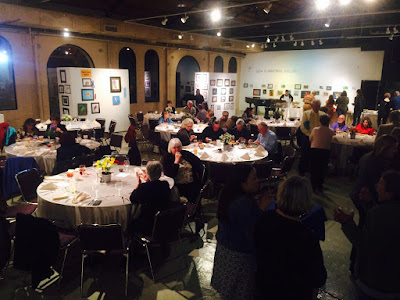 The closing dinner was held in a local arts center. Local school children contributed all of the artwork you can see in the photo, and festival organizers, local artists, and members of the city council were on hand to award prizes to particularly outstanding pieces. One point that was repeatedly hammered home was the economic impact of the festival on the community. I think that this is a consideration often ignored by birders, that is that our collective financial worth actually matters to the communities that we visit. While I am not advocating the creation of a "birding lobby" it would be very interesting if birders found a way to throw their collective weight around more than we currently do. Birding is one of the most popular hobbies in the country, and our contribution to local economies is many instances is significant. National organizations like the Audubon Society certainly carry come amount of clout, but even I as a seasoned birder feel disconnected from most of them. Maybe at some future point I will ponder how might we birders might better nucleate to effect changes that benefit both birds and the communities connected to them.

I'll leave you with the best photo that I grabbed during the festival. Most of my time was focused on making sure attendees got their target birds, but I did grab a few seconds to myself to grab this frame! 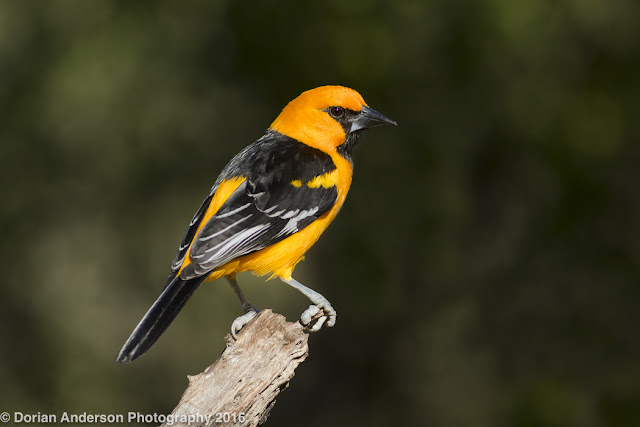 Posted by Dorian Anderson at 8:29 PM