This past weekend I jumped aboard my first San Diego pelagic trip. This trip was very much anticipated for 3 specific reasons. First, it was my first pelagic trip in nearly 2 years! My last one was a trip from Ventura, CA in October of 2013. This was my first trip of this year, and I did not take any pelagics during my petroleum-free, Biking for Birds bicycle Big Year in 2014. After such a long hiatus, I was very excited to get offshore this weekend. Second, I figured this late-summer trip would give me a very good shot at 2 new birds - Craveri's murrelet and Least storm-petrel - and an outside chance at rarities such as Red-billed tropicbird, Guadalupe murrelet, and Wedge-tailed shearwater. Third, Sonia (my girlfriend) decided to accompany me on this adventure; This would be her first pelagic trip ever!

Beauty (right), Beast (left)
Sonia's best mix-up of the day was hybridizing
Pink-footed shearwater with Black storm-petrel to
yield the elusive Storm-footed petrel.
It was her first pelagic so we'll let it slide. 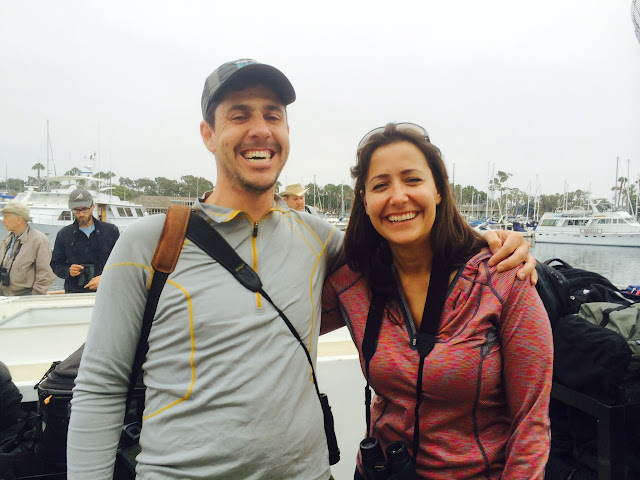 I was particularly excited for this pelagic trip given the building "El Nino" (Sorry, I haven't figured out how to add accents/tildes in Blogger yet!) in the Pacific this year. Very briefly, El Nino is an Eastern Pacific meteorological phenomenon whereby shifting equatorial winds deliver, through an interrelated series of events, warmer than usual waters to more northern latitudes including Western Mexico and California. This year's El Nino is actually shaping up to be as strong as that of the winter of 1997-1998.

In addition to amazing fall pelagic birding, the 1997-1998 episode brought abnormally heavy rains during the subsequent winter. I was a freshman a Stanford at that time, and I recall a series of storms that flooded the entire campus. Classes were cancelled and students asked to report to the library to rescue thousands of soggy books (most of these were salvaged through chemical desiccation in the following months). Here is the Stanford paper from that memorable day. 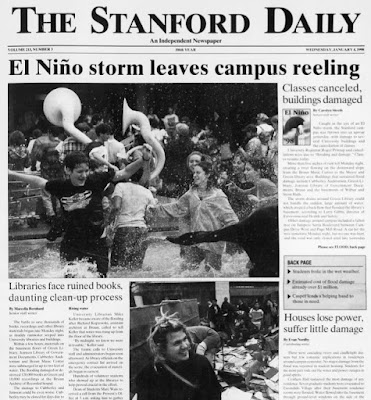 The reason all of this is relevant is that pelagic birding can really heat up as warmer water moves north. Birders never know what might show up on a pelagic, and this year's water conditions only added to the potential excitement. Both Least storm-petrels and Craveri's murrelets had recently been seen in the vicinity of the 9-mile and 30-mile banks - the two areas we would specifically be birding - so I was particularly hopeful that we would be able to find those would-be lifers.

Without going through a minute-by-minute account of the trip, I will simply say that the trip was a lot of fun. The birding was what I would describe as slightly north of average - no better but certainly no worse. We had the expected shearwaters (Black-vented, Pink-footed, Sooty), Pomarine jaegers, and Black, Ashy and Leach's storm-petrels, but we "dipped" (missed) on the species that I was specifically seeking. We never found any big storm-petrel rafts, and Craveri's murrelet proved elusive despite calm conditions. Highlights did include two handfuls of Sabine's gulls, upwards of 20 Brown boobies, nice views of Cassin's auklets, a lone Black-footed albatross, an several sharks (Mako, Hammerhead). My personal highlight was the large (~400) pod of dolphins that surrounded our boat in the late afternoon. Many of them performed acrobatic leaps that propelled them 10-12 feet clear of the water's surface! After seeing them in the wild, one realizes what a tragedy it is to keep them in captivity. Notably, we saw very few whales, the lone exception being a fin whale that made a very brief appearance on our way in. I cannot help but think the lower than expected bird numbers and the low number of whales might be connected to what the fish (i.e. food) was doing on that day. Despite its seeming homogeneity, the ocean is an incredibly dynamic system. Once day can be quiet and the next in the same area can be non-stop action. That's why you have to take a lot of pelagics in order to be guaranteed to get a really good one! 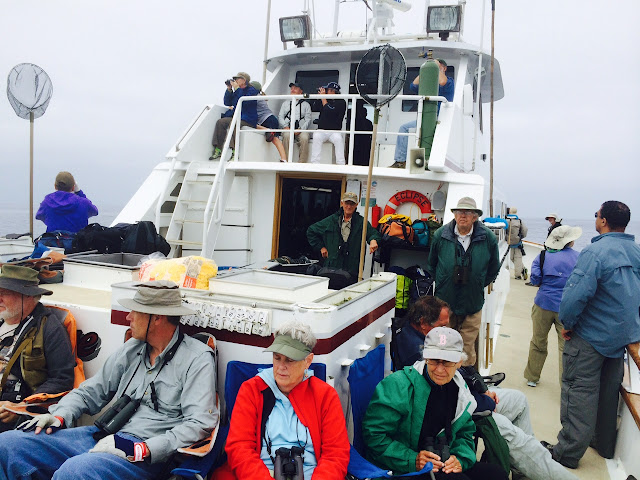 The overcast light and flight light made for comfortable birding and generally good viewing conditions. It also, however, rendered any photography the might occur decidedly unexciting.  As a result, my camera stayed holstered for much of the trip. Here are the two best of the admittedly marginal few that I did collect. Every background was overexposed to get any detail on the birds. 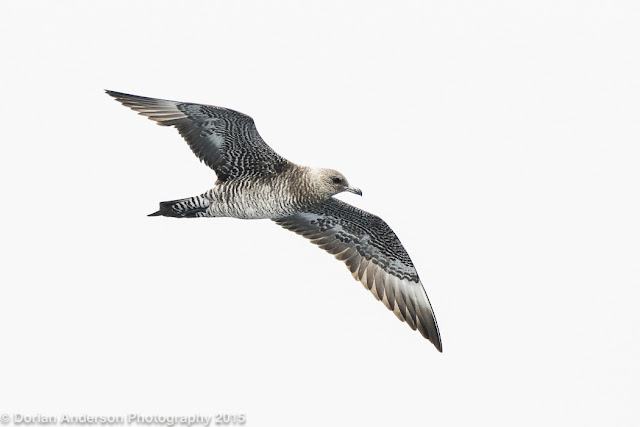 Brown Booby
10 years ago this was a legitimately rare bird in Southern California.They have greatly increased in number in that time
and are now allbut expected on San Diego pelagic trips. 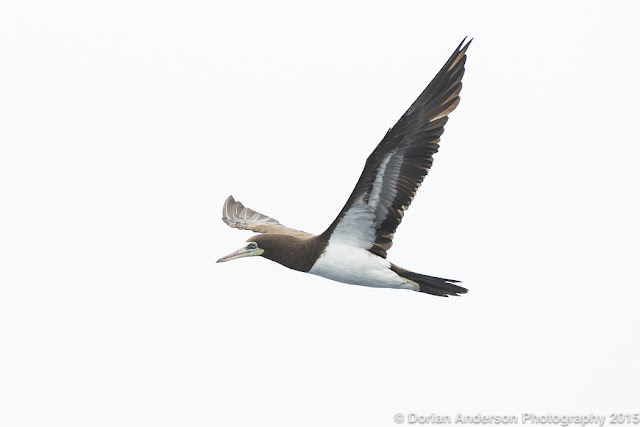 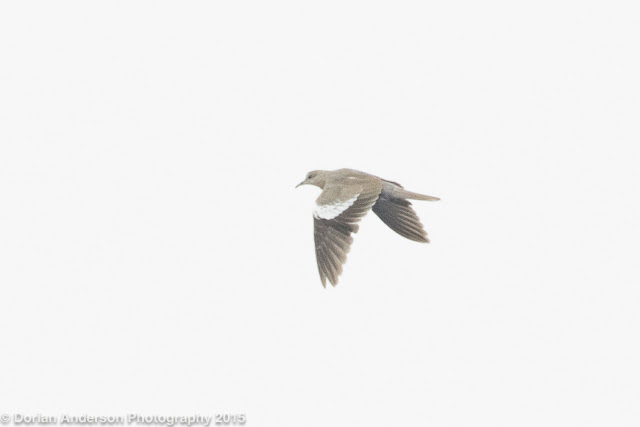 I would like to thank the folks the trip organizers - Dave Povey in particular - and Pacific Nature Tours for what was a very enjoyable trip. Sonia had a great time and has expressed a desire to do more trips in the future, so we will certainly be taking many more trips while we are here in Southern California. I will be certain to post on those when they happen. My next pelagics will be September 25, 26, and 27 from Monterey. In the interim, I will be heading to Sweden and Denmark to give a series of lectures about my biking adventure last year! I'm really Looking forward to some European birding in the next few weeks! 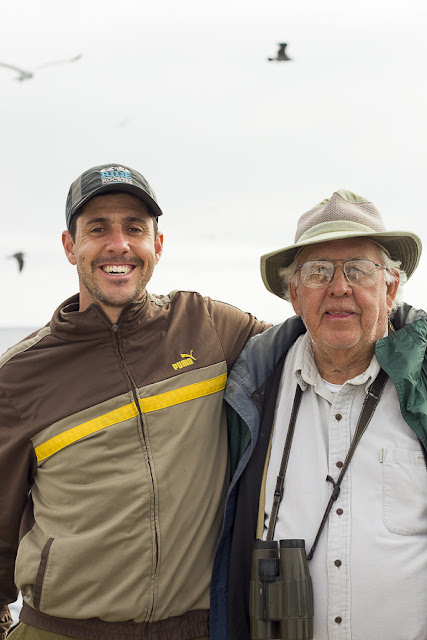 Lastly, here are a few photos while futzing around Mission Bay and the San Diego River on Saturday evening. I had hoped for direct sun, but met with still-useable muted light late in the day. 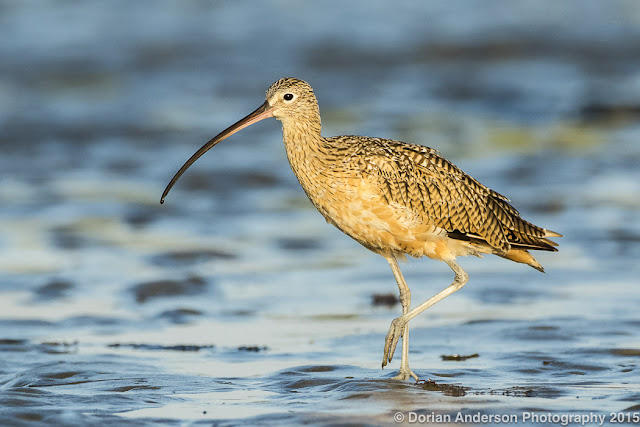 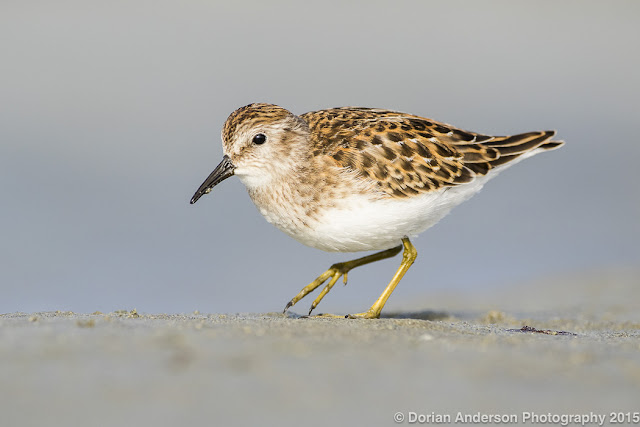 Posted by Dorian Anderson at 11:12 PM